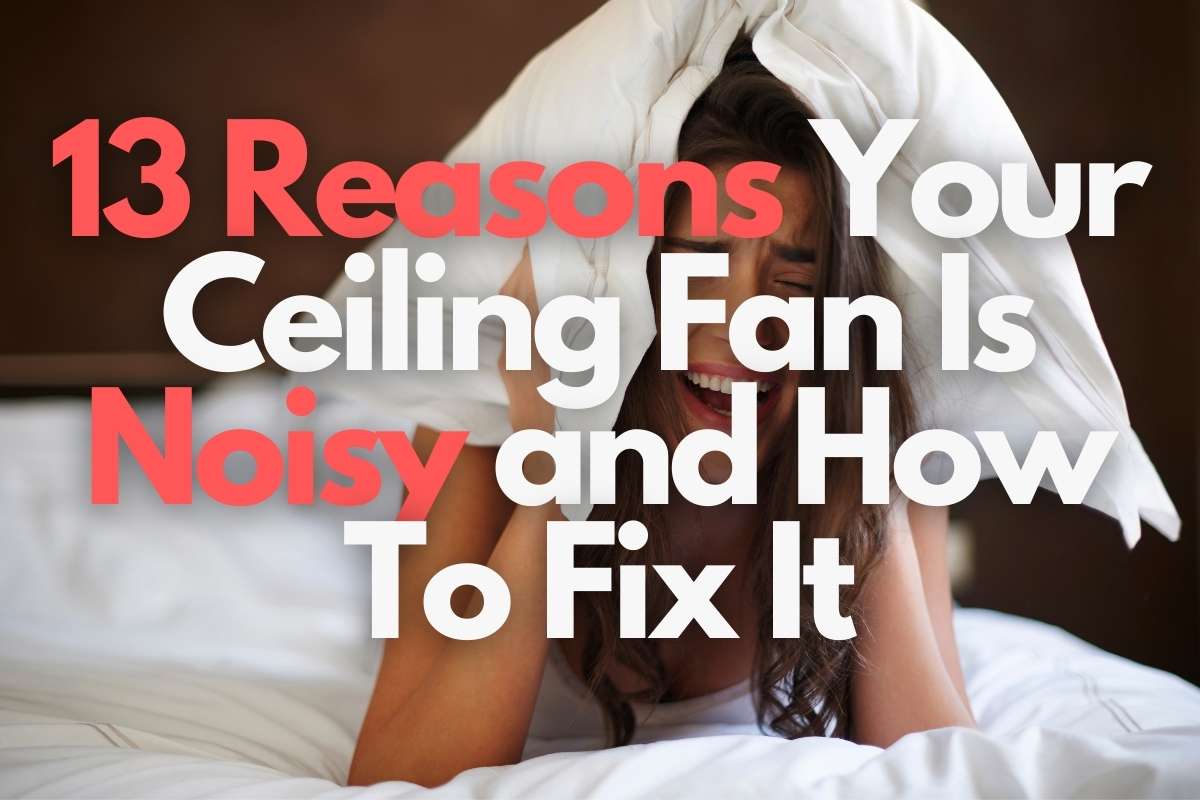 Ceiling fans are not supposed to be noisy. The average residential ceiling fan should be no louder than 60 dB (decibels) to 70 dB. There are several problems that make a ceiling fan noisy, but thankfully most of those problems can be fixed with basic hand tools and minimal electrical or mechanical knowledge.

Here are 13 reasons your ceiling fan is noisy and how to fix it:

In this article, I’ll explore 13 possible reasons your ceiling fan is noisy and how to fix them. I’ll also explain how to determine what the exact problem is by the type of noise a ceiling fan is making.

Under regular operation, a ceiling fan will produce a quiet whirring noise as the blades move through the air. Over time, dust and grime will build upon the blades. This will alter the airflow around the blades and throw off the overall fan balance as it rotates.

Altered airflow around the blades produces a louder whirring noise. If the fan balance is thrown off, it’ll rock back and forth as it rotates, producing a clicking noise.

If your ceiling fan produces a louder than normal whirring noise or clicking, fixing the noise can be as simple as cleaning off the blades. Take a wet paper towel and wipe down both the top and bottom faces of the fan blades. There may be an impressive amount of dust and grime accumulated on the blades, which will likely take several paper towels.

Fan blades don’t have to be dirty to make the fan noisier. Fan blades are typically attached to the fan hub with screws. If these screws are loose, the blades can flop around against the hub and make a clicking noise. Loose fan blades can also flutter as they move through the air.

Loose fan blades can usually be fixed by tightening the screws. But if the screws can’t be tightened any further, putting metal or rubber washers between the blades and the hub is just as good.

Under normal conditions, the fan’s center of mass will be collinear with its axis of rotation. In other words, its weight is balanced along the axis about which it spins. An imbalanced fan will swing back and forth in its housing, making a clicking or grinding noise. Uneven blade weights are the most likely cause of an imbalanced fan.

Fan blades are balanced by attaching small weights to them. Fan balancing kits are available on Amazon and most hardware stores.

Even if the fan blades are clean, tightly attached to the fan hub, and properly balanced, they can still make noise. One or more blades themselves may be damaged or deformed enough to either alter airflow around them or alter the fan’s balance. The altered airflow can be louder on its own and cause the fan to swing around.

When you examine a noisy fan, be sure to inspect them for signs of damage or deformity visually. The blades should be essentially identical, with smooth surfaces and identical curvature.

Light fixture components are usually attached to the rest of the fan with screw joints or nuts and bolts. Tightening them will stop them from swinging and making noise.

Can You Replace Any Ceiling Fan Light Bulb With an LED One?

Ceiling fans are generally mounted on the ceiling with screws. If the screws are loose, the entire fan can wobble or vibrate against the ceiling. This makes a lot of noise.

To access the mounting screws, you’ll need to remove the canopy and rest it against the lower parts of the fan. Tighten the screws, and replace the cover.

The canopy is the shell that covers the fan base and protects the wiring and other internal components. If it’s loose or damaged, it can vibrate against the other parts of the fan or the ceiling. This will make a clicking or humming noise.

A ceiling fan canopy is usually mounted on an internal bracket that holds the motor and is attached using screws. When attempting to fix a noisy ceiling fan, be sure to tighten the screws holding the canopy in place.

A ceiling fan’s electric motor is generally mounted directly above the hub and blade assembly and will have a separate housing. The housing is mounted on an interior bracket with screws. If the screws are loose, the motor housing can vibrate or scrape against the hub as it spins. Tightening the screws will hold the housing in place.

Some fans conceal the motor inside of the canopy rather than giving it separate housing.

Can Ceiling Fan Motors Be Replaced? How Much Does It Cost?

The fan’s rotor may make a rubbing or grinding noise as it moves against its bearings. The rubbing can make an unpleasant metal-on-metal grinding or ringing noise. Over the long term, the grinding will damage and eventually destroy the motor.

The solution to a grinding rotor is proper lubrication. Determining whether your fan needs to be lubricated requires disassembling it and visually inspecting the bearings. The bearings will look wet if they’re properly lubricated.

Most ceiling fans are equipped with pull chains to turn them on or off and adjust their power level. If the fan is imbalanced, the pull chain can swing back and forth. And if the chain hits the fan housing or the blades, it’ll make a clicking noise.

There are several ways the electrical components of a ceiling fan can go wrong. Here are some common causes for electrical noise produced by a malfunctioning ceiling fan.

If your ceiling fan is drawing too much current, your household circuit breaker may start to make an electric hum. If this happens, you should turn off the fan and call a qualified electrician immediately.

If your ceiling fan has a light fixture controlled by a dimmer switch, it can produce an electrical hum from the wires or contacts vibrate.

Dimmer switches are often not compatible with older combination ceiling fans and light fixtures. Consult the manual before installing a dimmer switch in the same circuit.

Many modern ceiling fans are equipped with remote controls and have wireless receiver components built into their internal circuitry. It’s also possible to retrofit existing fans with remote control receivers. If you choose to do so, consult your ceiling fan’s manual or the manufacturer to ensure the fan is compatible with a particular receiver.

Incompatible or defective receivers can produce an electrical buzzing as the fan draws more electricity through it than the receiver is designed to handle. If this isn’t dealt with promptly, the receiver could eventually develop short circuits or other damage. This is especially common when wireless receivers are installed to control older ceiling fans.

Damaged or defective electric motors can produce audible buzzing noises. The buzzing is produced by the electrical windings vibrating against the motor housing. In some cases, the motor will buzz without turning at all.

A malfunctioning fan motor might be repairable by a trained professional. Still, it may be more practical and cost-effective to replace it entirely. Older fans should be replaced entirely when their motors fail.

Electrical noises may come from other electrical circuit parts in a room where a ceiling fan is installed—for example, electrical outlets or light switches.

Trained electricians should tend to electrical problems. But if you’re confident in your ability to handle it yourself, please be sure to turn off the power to the portion of your house you’re working in.

Properly installing a ceiling fan is not as simple as you may think. Improper installation can make a fan noisy and potentially dangerous. Suppose a ceiling fan is not attached to the ceiling correctly. In that case, it can swing around or vibrate and may eventually fall to the ground. An improperly wired ceiling fan can be a fire hazard.

The best way to prevent improper installation is to install it by a trained professional, usually an electrician.

If you or a trained professional have exhausted every possible cause of ceiling fan noise, you might’ve a bad fan. As the American capitalist economic system deteriorates, the quality of American consumer goods has declined considerably in the last 20 years.

Signs of either poor design or manufacturing defects include excessively loud whirring as the fan spins, inconsistent speed of rotation, and excessive vibration during operation. Defective fans have also been known to fall apart while running.

One recent example of defective ceiling fans is the December 2020 US Consumer Consumer Product Safety Commission ordered recall of over 190,000 Hampton Bay Indoor/Outdoor sold at Home Depot. Due to poor construction, the mounting screws could come loose, allowing the fan blades to rattle around, eventually detaching from the fan and causing damage to property and some injuries.

Identifying Types of Ceiling Fan Noise (and What They Mean)

When attempting to identify and fix the cause of ceiling fan noise, be sure to consult the manual provided by your fan’s manufacturer.

When in acceptable condition, the average residential ceiling fan should be no louder than 60 dB (decibels) to 70 dB, or the volume of a normal conversation or pre-pandemic corporate office. There are five different types of noise ceiling fans can make when dirty, damaged, or malfunctioning:

Clicking and rattling are mechanical noises made by two or more pieces of the fan hitting each other. In-ceiling fans typically come from joints between two parts, for example, the joint between fan blades and the blade irons. A clicking ceiling fan usually means that one or more parts are loose, allowing them to impact each other.

Humming noises in ceiling fans can be either mechanical or electrical, and it’s difficult to tell which it is. Mechanical humming is typically caused by the ceiling fan’s motor vibrating in its housing.

Electrical humming is often due to a bad connection somewhere in the wiring between the fan and your circuit breaker. The hum can also be produced by electrical components vibrating in the magnetic fields produced by the current.

Another possible cause of a humming ceiling fan is an insect trapped in its housing or light fixture globe.

Many of the possible noises a ceiling fan can make are caused by the moving parts rubbing against each other. These noises will generally come from the motor, rotor, flywheel, or other parts near the center of the fan.

Whirring is made by the fan blades traveling through the air and is expected under regular operation. But if it is excessively loud, it can indicate something is wrong with the blades. It’s not a common cause of noise in ceiling fans, but it’s a possibility.

Crackling and sizzling are both very bad noises for any electrical appliance to make. They’re caused by either short circuits, which could start a fire, or even a small electrical fire.

While ceiling fans are supposed to be quiet, many problems can make them noisy. In many cases, these problems can be fixed by a competent DIYer, but some require professional assistance. It’s probably just a loose screw or two.

link to Can Ceiling Fan Motors Be Replaced? How Much Does It Cost?

Continue Reading
link to Does a Ceiling Fan With Remote Need a Wall Switch?

Remote-controlled ceiling fans make cooling off your home simple. At the touch of a button, you can adjust speeds, turn your fan off and on, or adjust lighting settings. Alternatively, you can always...