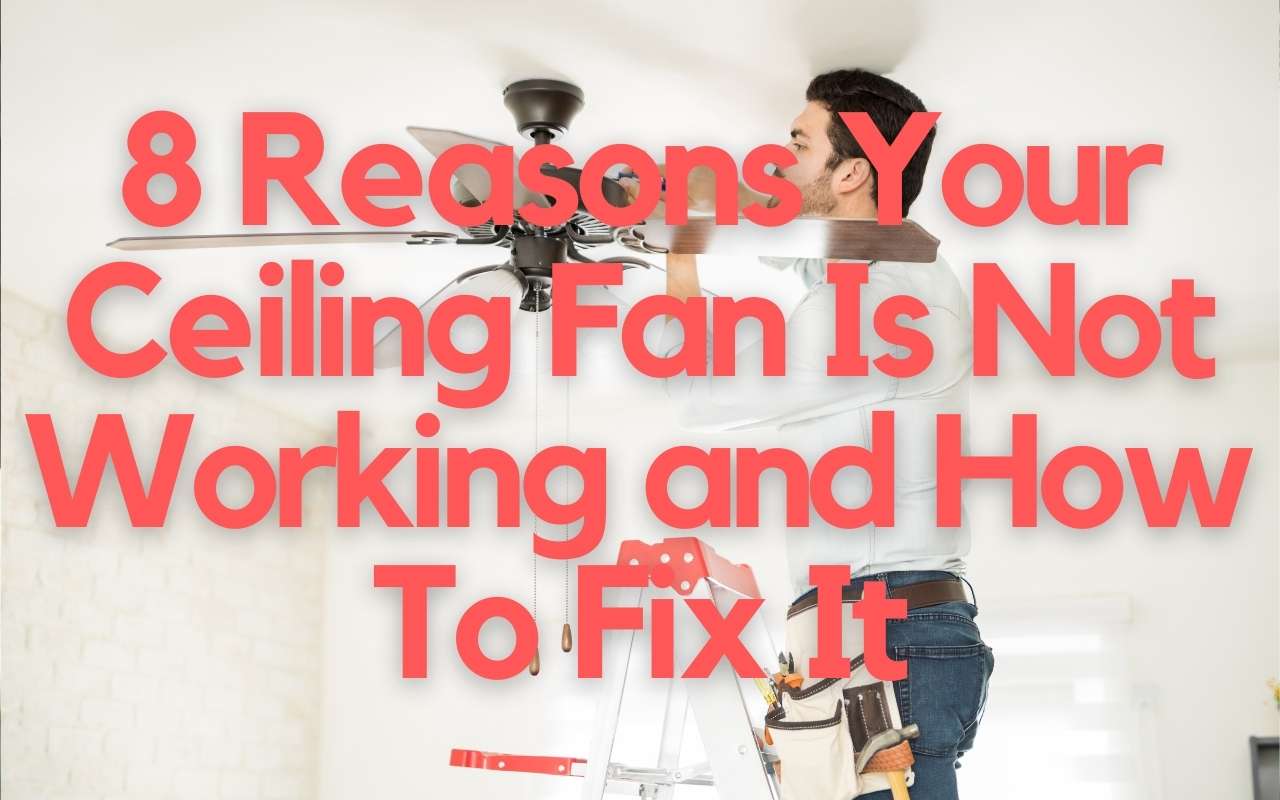 There’s little worse than a ceiling fan that stops working in the middle of a hot summer’s day. Thankfully, many of the problems are pretty simple, and you can fix them quickly. Unfortunately, this isn’t always the case, for some, you may need to call an electrician to help you.

Here are 8 reasons why your ceiling fan is not working:

As you’ve noted from the points above, there are many possible reasons why your ceiling fan has suddenly stopped working. This article will guide you through why these problems have occurred and how to spot the culprit. We’ll also look at some ways to fix the issues.

1. Your Motor Has Overheated

A common reason why fans stop working is overheating. Overheating can be the result of too much dust or rust.

With ceiling fans being so high up, we can easily forget to dust them during our cleaning sprees. If you take a look on top of your blades, you may be surprised at how much dust you’ll find.

Accumulated dust can strain both the blades (preventing them from spinning smoothly) and the fan’s motor. If dust clogs up the filters, the motor won’t be able to cool down, which will result in overheating.

Another problem could be rust. Rust in the motor will cause it to seize up. It occurs when the fan’s vulnerable to drops of water, either from rain or cleaning. It can rust from salty air if it’s located near the ocean or in high humidity areas.

Prevent dust and rust accumulation in the future by vacuuming the blades and motor every few months and adding a couple of drops of oil to all moving parts, as lubrication is essential in preventing it from seizing up.

If you stay in an area with high humidity levels or live near the ocean, I recommend trying out Honeywell Ceiling Fans (available on Amazon.com). The materials used in these ceiling fans are designed for outdoor use and are therefore less prone to corrosion and rusting.

Suggested: Can you replace a ceiling fan motor?

Even though the fan may not be working once switched on, the fanlights should still come on, and you may hear a humming noise. To check if your motor has burnt out, switch the fan’s circuit breaker off and remove the motor housing. You’ll see if the motor has burnt out because it’ll be melted.

Unfortunately, replacing the motor is the only way to fix a fan that has overheated and resulted in motor failure. Make sure that you buy the same one that was in your fan. Thankfully, they’re not very pricey.

2. Your Circuit Breaker Has Tripped

If your fan suddenly stops working, one of the first things to check is the circuit breaker. As simple as it may sound, your ceiling fan may have stopped working because it has stopped receiving electricity due to a tripped or turned-off circuit breaker.

For safety purposes, your circuit breaker will trip, stopping the flow of electricity and leaving the circuit inactive. This occurs to prevent damage to the wires, overheating, or even fires.

To fix a tripped circuit breaker, follow the steps below:

If your circuit breaker repeatedly trips, move appliances onto other circuits. A circuit that trips often is an indication that it has too high of an electrical demand placed on it.

3. Your Wiring Has Disconnected

I don’t know about you, but when it’s a scorching summer’s day, my fan will be on a high speed from morning until night. This continuous level of use may easily result in a wire coming loose within the fan’s motor housing.

A loose wire will result in no electricity going into your fan or its lights, even if you’ve switched it on at the wall.

Here are the steps to fix you wiring that has disconnected:

If your fan is still not working or you don’t feel confident working with electrical wires, phone an electrician to check your fan instead. Safety should always be your number one priority.

If your fan’s pull chain won’t pull down, if you pulled too hard and it broke off inside the housing, or if your ceiling fan won’t come on when you’ve drawn it, you’ll need to replace the pull chain switch.

Remember that before you start working on any part of your ceiling fan, always start by turning off its circuit breaker on the electrical panel to cut the power supply and keep you shock-free. This step is the most important and could be the difference between life and death.

5. Your Wall Switch Is Broken

If you’ve switched your ceiling fan on and it’s not working, the fan may not be the problem at all. The problem may be with the wall switch.

This problem involves opening up the switch on your wall that turns your fan on and off. If you don’t feel comfortable or confident fixing the wires, call your electrician. Typically, electricians will do it for a reasonable price.

Suggested: Does a ceiling fan with remote need a wall switch?

Follow the steps below to fix your broken wall switch:

6. Your Reverse Switch Is in Neutral

A lot of fans have the reverse switch function. If you’re not sure if yours does, turn off your fan, climb up your step ladder, and take a look.

The reverse switch is a beneficial function. Most people typically set their ceiling fans to rotate in an anticlockwise motion in summer as this motion of the blades cools a room down. When you push the reverse switch in the opposite direction, the blades rotate clockwise, which pushes the warm air down from the ceiling. The flip of a switch can add warmth and can lower your electricity bills.

If you have pushed the reverse switch to neutral, your fan won’t spin. You or another house member may have accidentally done this while cleaning your fan. Thankfully, it’s quick to fix!

To get your fan back to either rotating anticlockwise or clockwise, push the reverse switch entirely back or all the way forward to get it into the rotation you desire.

7. Your Fan Remote Has Run Out of Battery

Does this sound too simple to be the problem? Believe me, when I’m stressing about why an appliance isn’t working, I tend to forget the basics.

Not all ceiling fans operate through a remote, but if yours does and your fan was working the last time you turned it on but not this time, it may very well be that the batteries have run flat.

Suggested: How to turn your ceiling fan on/off if the remote is broken?

Before rushing out to buy new batteries, remember to open the back of the remote and check what kind of batteries it requires. Swap them out once you have bought new ones, matching the plus and minus sign up to the remote as instructed.

8. The Remote and the Receiver Are at Different Frequencies

If getting new batteries for the remote didn’t solve the problem, your remote and receiver may not be set to the same frequency. If they’re on different frequencies, the receiver won’t pick up any instruction from the remote.

Suggested: Do universal remotes on all ceiling fans?

Here are the steps on how to fix your fan when the remote and the receiver are at different frequencies:

There are several reasons why your fan could have stopped working. Either gradually or suddenly. Give each tip a go as it could be a simple fix and a big money saver!

If you’ve tried all of the tips in the article, and your fan is still not working, you may need to have your fan replaced. If you don’t feel confident enough to fiddle around with the wiring, phone your electrician to come out and look at it.