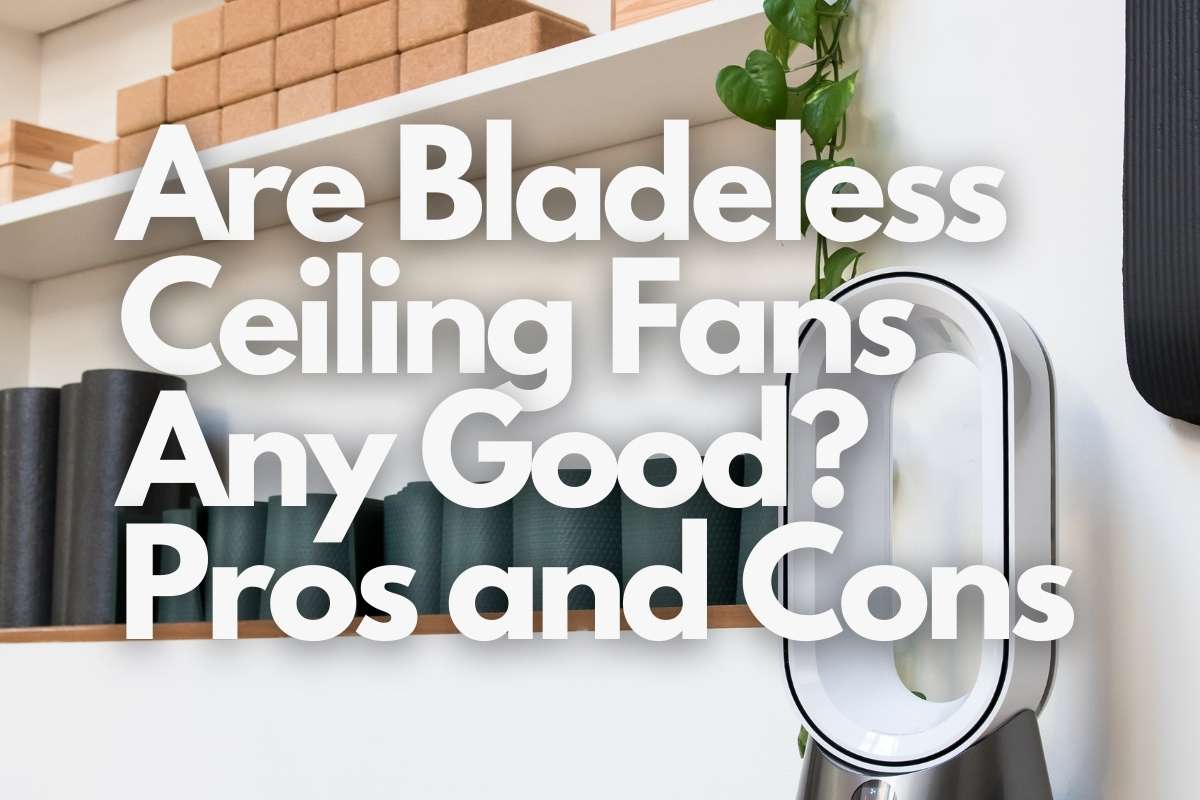 Even with modern climate control equipment, it can be challenging to achieve a comfortable air temperature in your living and working area. In the world of fans, bladeless fans are one of the newest and “coolest” innovations. But are they any good?

Bladeless fans are not actually bladeless. Fans use electric motors to turn an assembly of blades or vanes to induce air motion. The blade/vane assembly is collectively referred to as the impeller, rotor, or runner.

Air is sucked into the pedestal through many holes and directed up into a hollow ring. The air is then expelled through vents placed around the ring’s circumference over an airfoil-shaped surface, inducing movement in the surrounding ambient air through the Coandă Effect.

The result is a directional jet of air much greater in volume than the air sucked into the pedestal.

The discoverer of the Coandă Effect, Romanian inventor Henri Coandă, noticed that jets of air or fluid follow along curved surfaces. As the jet of air is expelled from the vents in the ring of a bladeless fan, it follows the curved contour of the airfoil surface and moves away from the center of the ring.

Doing so creates a low-pressure region in front of the ring. Air then flows from the relatively higher pressure region behind the ring, forming a jet of moving air.

Bladeless fans were first invented and patented by Toshiba in 1981. Toshiba lacked the resources and expertise to develop the technology into a marketable consumer product, and existing electric motor technology was unsuitable. So Toshiba sat on the patent until it expired in 2001.

Industrial designer James Dyson of Dyson Vacuums fame began working on refinements to the Toshiba bladeless fan technology in 2004 and patented his version in 2006. The first generation Dyson Air Multiplier was released to the market in 2009.

While Dyson owns the patent for his version of a bladeless fan, the expiration of the original Toshiba patent on the concept of a fan-based on the Coandă Effect has allowed other manufacturers to produce their own versions.

One of the key selling points of a bladeless fan is the superior safety they offer.

Conventional fans have their impellers mostly exposed, meaning it is possible for some to accidentally stick their fingers or other parts of their body in the fan and potentially injure themselves. This is especially true of small children. Bladeless fans conceal their impeller inside their pedestal, rendering out of reach of even the most determined child.

Another safety plus of a bladeless fan is their low center of mass. The heaviest part of a fan is the electric motor. The motor is raised a considerable distance off the ground in a conventional fan, especially a pedestal fan. This makes them relatively easy to tip over even if they are built with a broad or weighed base.

But in a bladeless fan, the electric motor is placed much closer to the ground, making it harder to tip over. That should increase the fan’s longevity and make them safer around small children and energetic pets.

Because they use the Coandă Effect to produce an air jet rather than an exposed impeller, bladeless fans produce a much smoother airflow than conventional fans. The exposed rotating impeller of a conventional fan induces a considerable amount of turbulence in the airstream they produce.

The turbulence manifests as a choppy inconstant airflow that is both louder and potentially uncomfortable.

The airflow produced by a quality bladeless fan can be analogized to a laser beam, where that produced by a conventional fan is more like a strobe light.

Bladeless fans conceal the motor and impeller inside of the pedestal and produce less air turbulence. Provided the material the pedestal of a bladeless fan is sufficiently dense, the noise produced by the electric motor and the spinning impeller will be confined mainly to the interior of the fan.

Lower noise levels have been a critical advertising point since Dyson introduced the first-generation Air Multiplier in 2009. But it was only in the last few years that the bladeless fans began to live up to this claim.

Testing by Canstar, an Australian equivalent to EnergyStar, determined that bladeless fans cost on average less than half as much as conventional fans to operate per hour.

Because the moving parts of a bladeless fan are concealed in the interior of a bladeless fan, they are easier to clean. Cleaning the outside of the fan is as simple as wiping them down with a damp washcloth. Conventional fans, especially newer tower fans, have many electronic and moving parts that cannot be exposed to water.

We have reason to question whether bladeless fans are easier to clean than conventional fans, as is often reported.

This YouTube video posted by user Karl ale shows the poster disassembling a Dyson bladeless to clean it:

The video shows a large amount of dust collected on the inside of the pedestal and ring. Karl ale reports that he followed the manufacturer’s cleaning instructions and that the procedure took him about two hours.

As mentioned above, the heaviest components of a bladeless fan are mounted closer to the ground. As a result, the upper parts of bladeless fans can be made of comparably lighter and thinner materials than conventional fans.

The lower center of gravity of a bladeless fan also makes them easier to move around.

Bladeless fans, especially the more expensive models like Dysons, are “cool.” They’re functional interior artwork. For a lot of customers with disposable income, style is more important than function.

While the pros of bladeless fans are formidable, potential buyers should be aware of their cons before deciding to buy.

As of the writing of this article in late August 2021, the least expensive Dyson Air Multiplier available on Amazon.com was the AM06 10-inch table fan.

A third-party Desk Fan Air Multiplier on Amazon.com with similar specifications produced by Misby was available for less than 25% of that cost. For even less money, you could get a Comfort Zone 3-Speed Table Fan on Amazon.com.

The Dyson and Misby offer special features like wireless remote controls, color-changing LEDs, and rechargeable batteries. The Comfort Zone offers the only feature you need, a fan. The price disparity gets even more pronounced with larger fan models.

Suggested: How much do ceiling fans cost?

Using the Coandă Effect, bladeless fans can produce an airstream with up to 17 times the volume of the air sucked into the pedestal. That is a genuinely impressive feature of engineering.

With the patent on Coandă Effect bladeless fans long since expired, there is no legal barrier to entry for third-party manufacturers that are less fastidious as Dyson. Bladeless fans are available at prices similar to conventional fans, but the quality of these models is suspicious.

The reality is that bladeless fans are still a relatively new consumer product, and manufacturers are still searching for the correct balance between quality and profit margin. Conventional fans have been commercially available for about a century. Manufacturers know how to produce them at decent quality with a high-profit margin.

Even Dyson Air Multipliers have suffered from quality issues. The first two generations were surprisingly loud in high-power settings and known for being fragile.

Bladeless fans have only been on the market for 12 years at the writing of this article, and there are some things we do not know yet.

As the primary writer of this article can report, conventional pedestal fans tend to last a surprisingly long time. That longevity can be annoying as the writer’s family used a trio of upsettingly loud pedestal fans for over 20 years.

Everything eventually breaks down. The longevity and cost-effectiveness of bladeless fans could be enhanced if they were easy to repair. But there is not enough information available to make that determination.

As mentioned above, bladeless fans conceal the electric motor and impeller inside of the pedestal. This runs in contrast to pedestal fans where the motor and blades are exposed and easily accessible.

Bladeless fans also include electronic features like computerized speed controllers, color-changing LEDs, and wireless network access. Whether or not those features are used, they represent additional potential failure points.

The design and features of bladeless fans suggest that they are not easy to repair.

Are Bladeless Fans Any Good? The Verdict

The disproportionately higher cost and lower performance are the main stumbling blocks for bladeless fans. The cost could be offset by the lower energy consumption of a bladeless fan if the bladeless fan lasted long enough. Yet, we simply do not know if they will.

Still, bladeless fans are best for moderately affluent people who care about the style of their appliances as much as or more than how well they function. They’re especially good for the parents of young children who might hurt themselves while exploring their indoor world with their tiny fingers.

Bladeless fans are certainly an impressive feat of modern technology, which could supplant conventional fan’s place in indoor climate control with more time and development.

However, that comes with the lower performance and inconsistent quality of a relatively new consumer product.