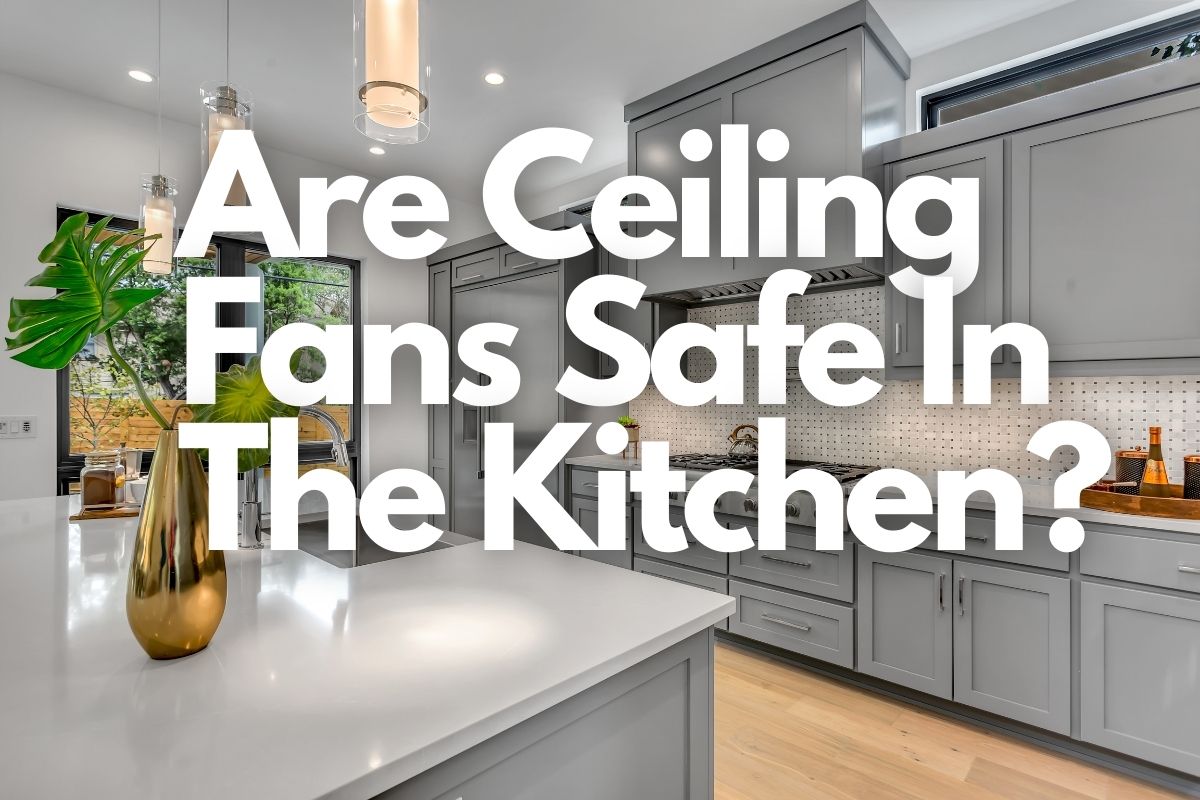 Cooking can get the kitchen and the cook pretty hot. A ceiling fan seems like a logical solution to stay a little cooler and fresher while preparing dinner. But is a ceiling fan safe and useful? Here’s what you want to know.

Ceiling fans are generally safe in a kitchen as long as they’re not mounted directly above the cooking area. However, they can increase the spread of cooking smells and grease through the house. In small kitchens an exhaust fan or pedestal fan can be a better solution to keep the cook cool.

What are some of the exact concerns and are they applicable to your situation? Find out below.

Are Ceiling Fans Safe In The Kitchen?

Cooking can get you pretty hot and a ceiling fan is an obvious choice to cool down a little bit. But is a ceiling fan safe in the kitchen?

Also, if you’re cooking on gas, the airflow from a ceiling fan can disturb the flame. In some cases it could extinguish the flame and then you have free flowing gas which is obviously something you want to avoid. Ceiling fans often don’t have very strong concentrated airflow so it’s not a huge problem but it is a small concern.

Mounting the ceiling fan a little further away from the cooking area means the airflow is not as strong and is generally safe. This way you’ll still have the air circulation that helps keep the cook cool although its not as strong as in the direct airflow of course.

If you cook on any type of electric stove this isn’t an issue.

Should You Put A Ceiling Fan In The Kitchen?

Ceiling fans are generally not a problem in the kitchen from a safety standpoint as long as they’re not mounted directly above the stove/fire area. But is it actually a good idea? It depends on what your kitchen looks like and what you want a ceiling fan for.

Cooking can get you very hot, especially if it’s hot where you live. A ceiling fan seems like a good solution to that problem, but is it?

Usually you want to keep smells from cooking in the kitchen. If your kitchen is a separate space from the rest of the house, this is a bit easier than if your kitchen is connected to the living room.

What a ceiling fan does is circulate air. It doesn’t cool the air down, it just moves it around. In that process you will be cooled down as well. Ceiling fans can also be used for circulate fresh air quicker around a space. It can reduce the heat directly around the cooking area and equalize it with the air in the rest of the kitchen.

Since ceiling fans only cool people and pets down through the wind-chill effect, you would want to turn it on while you’re there. And when you’re in the kitchen, usually that means something is cooking.

If you have an open kitchen, the problem is that a ceiling fan would just circulate all the cooking smells through the rest of the space quicker. This is something people usually want to avoid. That means adding a ceiling fan is maybe not the greatest idea.

In a closed kitchen, this is a little less of a problem. It’s easier to contain the smells when you can just close the door. Using a ceiling fan will still increase the spread of the smells and maybe even cooking residue in the kitchen but it can only go so far. So in this case, a ceiling fan can be a good solution to keep you a bit cooler.

It also really depends on the size of your kitchen if a ceiling fan is a good idea. In a small, cramped kitchen there is probably not much room for a large ceiling fan so you’d have to opt for a small version in which case you might as well get a wall fan.

Ceiling fans need some ‘breathing’ room to work properly and larger fans tend to have more but calmer airflow. This calmer airflow is better in a kitchen, even if it is a little outside of the cooking area.

Maybe a ceiling fan is not the right option for you in the kitchen. There are a few other options that might help you stay a bit cooler when cooking.

The problem with kitchens is often that cooking gets it hot and the heat builds up. You’re close to the fire or other heat source which makes you feel even hotter. It’s understandable you want to cool down a little.

Most kitchens have an extractor hood which pretty much does the same thing (if it extracts to the outside). However, adding another fan could up this kind of airflow quite a bit.

Of course this only works if there is a big difference in temperature between the kitchen and outside the kitchen. Also, it isn’t always possible to install an exhaust fan.

For a bit more airflow and focused cooling, a simple pedestal fan can be a solution in the kitchen. Pedestal fans are cheap and produce a concentrated stream of air where ceiling fans are more about creating air circulation in a larger area.

That means you can aim pedestal fans pretty easily towards the person (or object) you want to cool down without creating too much airflow in other places. This way you can maximize the cooling of persons while minimizing circulating smells. Of course it’s impossible to completely avoid pusing around cooking smells to other places but a pedestal fan can be used to do so less than a ceiling fan.

The downsides? Pedestal fans get in the way unlike ceiling or exhaust fans. In small kitchens this could be a problem. On the other hand, you can move them around easily and remove them from the kitchen when not necessary anymore.

link to What Size Ceiling Fan Do You Need For a Double Garage?

Continue Reading
link to Where To Mount A Ceiling Fan? Best Location