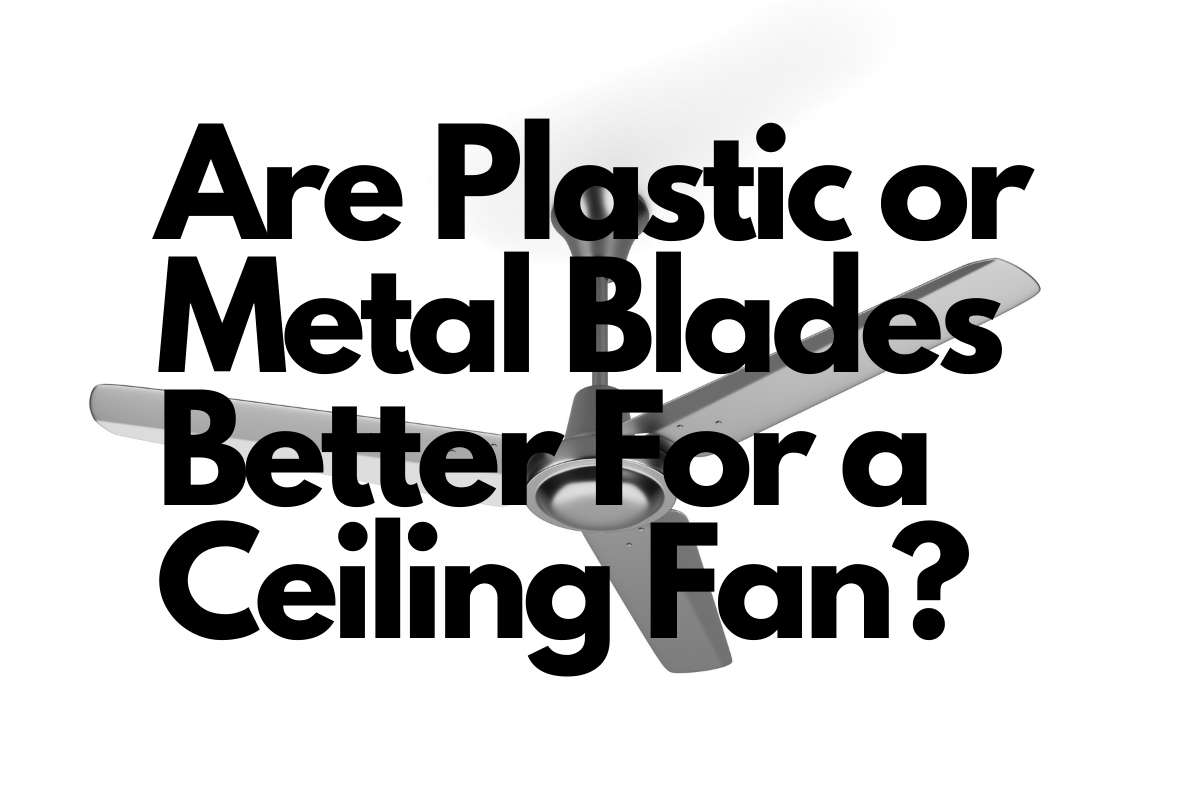 Metal fan blades are heavier, cost more, can corrode and are slightly louder than plastic ones. However, metal blades are also stronger, last longer and often look better. For most people plastic blades are the best choice unless the fan has to last for a very long time.

Keep reading below to find out more about the differences and what’s best for you. Also, metal and plastic aren’t the only choices. There are some other materials to be aware of.

Metal or Plastic Blades On a Ceiling Fan

Trying to decide between a ceiling fan with metal or plastic blades and are not sure what the differences are? Here are the pros and cons of both metal and plastic fan blades.

There are some pretty big differences. One is not necessarily better than the other, it depends on your budget and application what’s best for you. Check out the pros and cons below and see what is the best choice for you.

Pros and Cons of metal blades

Let’s first look at the pros and cons of metal blades.

Pros and Cons of plastic blades

Fans with metal blades last a long time (or at least the blades do), are strong and can look amazing. They can in some cases be susceptible to corrosion though. Once a fan starts corroding it won’t look so good anymore. Metal fan blades are also more likely to be sharper and they hit harder because they’re heavier. This means if something gets in there, it will do more damage but the metal fan blades are more likely to survive. They use a touch more electricity but it’s very minimal. Longevity is the main reason to go for metal blades. Think about older fans you might have seen around. There’s a very large chance it has a largely metal construction.

I should mention aluminum blades here separately. Aluminum blades are lighter and corrode much less quickly than steel blades but they are more expensive.

Plastic fan blades cost less and for most applications actually last long enough but the designs often look a little less good than fans with metal blades although there is a very wide range of looks for plastic blades. In most cases, by the time plastic blades become brittle and start sagging or breaking, the rest of the fan is probably due for replacement as well. With plastic you don’t have to worry about corrosion and you can easily use water to clean the blades.

Suggested: Are cheap ceiling fans worth the money?

Plastic and metal are not the only two materials used to make ceiling fan blades out of. Other common materials are:

Wooden fan blades can look very nice and can be found on some high-end ceiling fans. Wood can look absolutely amazing but often you’ll have to pay for that nice design. Of course wood is a natural material that can warp and be impacted by moisture. Many wooden fan blades are infused with plastic and/or sealed very well so this is not a problem. however, they’re not as durable as steel blades or at least not without some maintenance.

Composite, pressed board, MDF, etc. are also used to make fan blades out of on some cheaper ceiling fans. If your budget allows it, I would try to avoid these materials. They’re just sawdust or even forms of cardboard pressed together tightly and bound with glue. While new, you won’t notice much of a difference because they usually just look like plastic. They’re covered in a sealant and painted which makes it look normal although not amazing.

However, it is a sign of significant cost cutting which probably doesn’t stop at the blades. The rest of the components can be expected to be of lower quality as well. The biggest problem is that you can get droopy blades. If moisture gets into the blades past the sealant, it starts to weaken the glue bonds and the blades can actually become structurally compromised and start sagging. If you’re in a humid environment, this can be an issue.

The material of the fan blades is not unimportant but it’s also not on the top of the list of deciding factors for a ceiling fan.

Other things you have to think about are:

After all those things, blade material is another factor that can help you find the right fan in the vast sea of ceiling fans that’s out there.