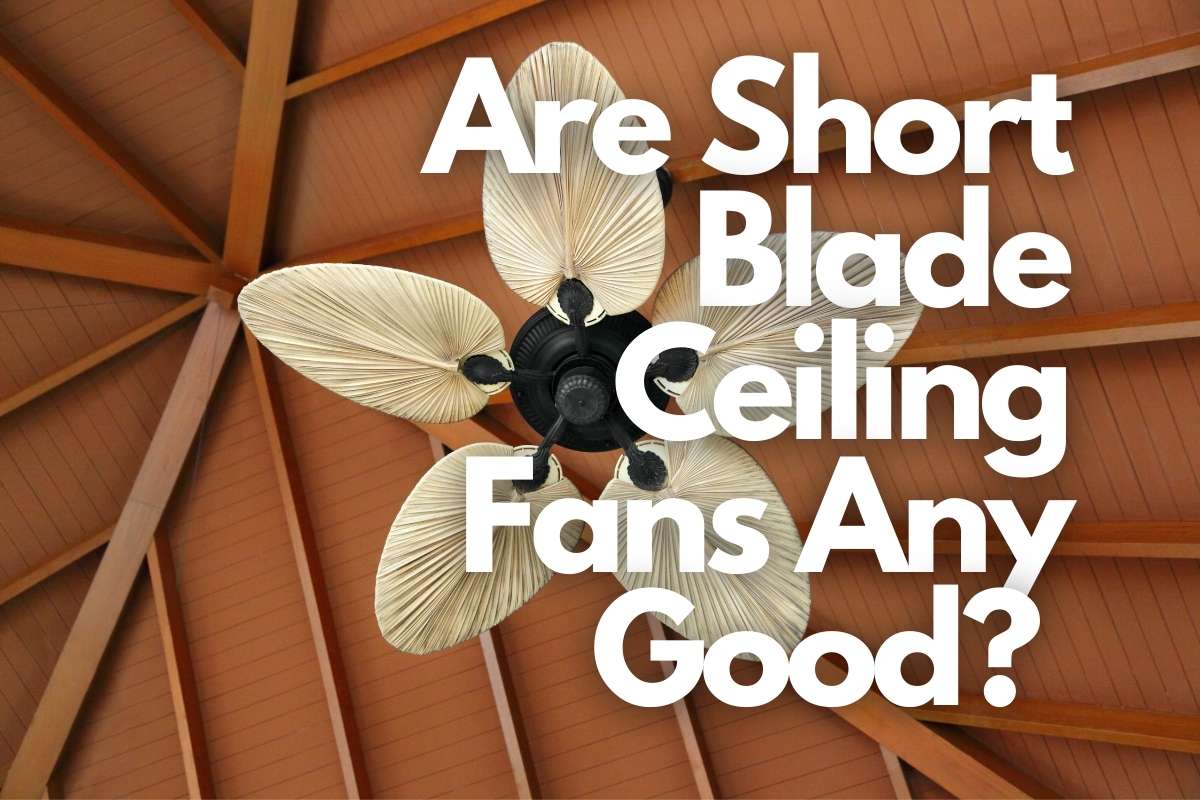 Does a ceiling fan with short blades seem like a good solution for you? Let’s take a look at the pros and cons of small bladed ceiling fans compared to regular ones and if it’s right for you. Here’s what you want to know.

In general, ceiling fans with short blades spin faster which creates more noise and produces a more direct and stronger airflow. It does so over a smaller area than a regular sized ceiling fan however. Cutting your ceiling fan blades shorter is often possible but not worth the effort.

Keep reading to find out why you should or shouldn’t get a ceiling fan with small blades, what the best options are and if you can just cut the blades on your current ceiling fan.

Small ceiling fans have some pros and cons compared to regular or larger ceiling fans. Here is a quick overview. For more details, scroll down a little further.

Ceiling fans generally serve an area that’s three times bigger than the diameter of the fan. So if you’ve got a 52” fan, it can serve about 13 square feet. However, you’ll still have some circulation outside of that area. That’s because a ceiling fan pushes air down but that also means an equal amount of air has to move up to keep the amounts of air on top of the room equal. So outside the served area, you can get some upwards airflow.

Suggested: How much CFM does a ceiling fan need?

What you do with a smaller fan blade is reducing the served area. So if you’ve got a small room, a smaller ceiling fans makes sense. That’s not where the differences stop though. Ceiling fans with small blades also usually spin faster. This is to compensate for the reduced airflow of the smaller blades. This results in a bit faster, more focused stream of air like you get from a floor fan. This can be good thing for cooling down but it’s also less comfortable. People usually don’t like strong streams of air directly on their body which is why they prefer ceiling fans in the first place.

Ceiling fans with longer blades spin slower but because the blades are bigger, they move the same amount/more air. This results in a calmer airflow but over a larger area. Because the air and blades moves a bit slower, less noise is produced.

If you have a larger area but want to create focused airflow in several spots, using multiple small ceiling fans instead of a single large one could be a good solution.

In general, I’d recommend using a larger ceiling fan as long as it fits in the space. It’ll be more comfortable and quieter. If you need more direct airflow, a floor fan might be a simpler solution. Alternatively, a large ceiling fan that can spin faster than you usually need could do the same job of having more direct airflow.

Let’s look at a few small ceiling fans that are actually worth buying.

Hunter makes great fans, big or small while not costing a ton of money. They’re not cheap but definitely not the most expensive either but the quality is good. This one is 34” in diameter so on the larger side for small fans but still pretty compact. Its classic looks will go well in many interiors and will cool you down pretty well. There is a built in LED light that’s dimmable which is always a nice feature to have.

Small fans don’t have to look weird and out of style. This is a really cool little fan for the right interior. It looks like a wooden old timey plane propeller that’s only 28” in diameter. It works well with the farmhouse style interior and has a built in LED light.

It can produce up to 2950 CFM on the highest setting which is very respectable for the size. It will be a touch noisy at that speed though. What won’t be noisy is the energy efficient DC motor though. The LED is not dimmable but the bulb is replaceable so you can fit something you want.

Find this fan here on Amazon

A cheaper option is the Honeywell Ocean Breeze fan. It has a 30” diameter and 3 blades. It has a built in light which is dimmable which is good for the bedroom. The 30” blades mean it works well for spaces up to 10’ x 10’ or smaller. It looks modern but is not over-styled. There are three speeds and the direction is reversible so it’s usable in the summer and winter.

Very small, looks great, produces a natural breeze and is very expensive. That about sums up the LUMIO.

The airflow this special design produces is more gentle than most other small ceiling fans which is more comfortable. They’re also small with 28” and 21” versions being available. Looking for a nice ceiling lamp that produces a nice breeze? This is the fan you’re looking for.

Can You Shorten The Blades On a Ceiling Fan Yourself?

Got a fan with normal or long blades and are wondering if you can just cut the blades short yourself? Maybe you think your space is better for a fan with short blades which is why you want to do this.

It is possible to shorten the blades on a ceiling fan but there are a few issues.

In most cases it’s not really a problem for the motor. With shorter blades, there is less weight to move and there is less air resistance which reduces the load on the motor. In most models this will have as a result that the motor can spin faster with the same amount of power. This is what you want since smaller blades move less air so it has to be compensated with higher speeds. Longer blades than are originally on the fan are usually not a good idea.

For the matter of cutting the blades themselves, how good are your DIY skills and what kind of end result do you expect. Also, what’s the material the blades are made out of?

Just cutting a bit of all the blades isn’t too difficult. Cutting exactly the same piece of every blade and doing it in a way that looks nice is a bit more difficult.

If your ceiling fan has relatively easily removable blades, you should consider cutting the blades on the inside. (The side closest to the motor.) That way you get to keep the original finish at the tip of the blade which makes it look much nicer. Of course you’ll still have to finish the surface where you cut off the piece. You’ll also have to drill new holes to be able to attach the blades back onto the motor.

However, before you take a saw to your ceiling fan, take a look at what your old ceiling fan brings on the second hand market and how much a new, short blade, one costs. The difference in price is probably not big enough to go through all the trouble.

link to What Size Ceiling Fan Do You Need For a Double Garage?

Continue Reading
link to Where To Mount A Ceiling Fan? Best Location