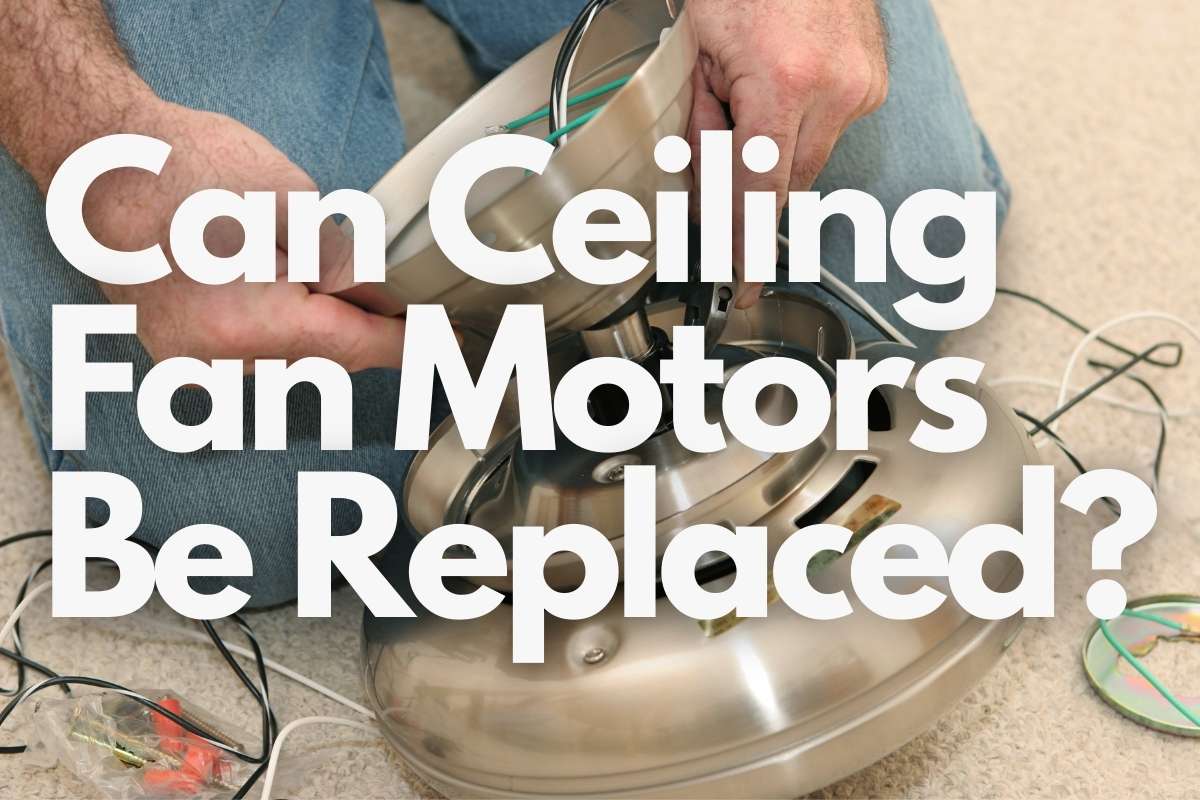 It’s annoying when your ceiling fan stops working, and you suspect it’s the motor, which can be incredibly irritating if you don’t know much about ceiling fans or you dread working with them on a ladder. Can ceiling fan motors be replaced, and how much does it cost to get them replaced?

Ceiling fan motors can be replaced for between $100-300, on average. Higher-end fans may cost more for a motor repair, up to $450. It’s also possible, albeit difficult, to perform a ceiling fan repair yourself. Finally, you may wish to replace the fan if a new fan is cheaper than a repair would be.

In this article, I’ll be going over the reasons ceiling fan motors burn out, how they’re replaced, and other relevant information that may be useful or interesting.

Like any type of machinery, the motor in ceiling fans can burn out or go bad. This will cause a reduction in speed followed by the fan failing. There are also other problems with ceiling fans that can make you assume it’s the motor.

In many cases, people think their motor is going bad when it’s the capacitor, but with many other electrical problems, the exact source can be challenging to pinpoint. For example, if your ceiling fan hums or buzzes but doesn’t work, it’s almost certainly a bad capacitor.

Another issue that points to the capacitor as your culprit is if your ceiling fan is stuck on one setting and won’t change, including turning off.

Thankfully, replacing a ceiling fan capacitor is a cheap fix, costing between $8 and $10 if you opt to do it yourself. Professional capacitor fixes will cost you quite a bit more, as the Fixr link above details.

Suggested: 8 Reasons your ceiling fan is not working

Before you assume it’s the motor, which is a complicated affair to deal with, check all the wiring. Loose connections between the power source, switches, capacitor, and motor can cause some strange malfunctions. These can include the fan running at an improper speed, randomly turning off, or the light malfunctioning.

How To Tell If Your Ceiling Fan Motor Is Burnt Out

If you suspect that your ceiling fan’s motor has gone bad, it’s time to break out the multimeter and find out for sure.

To test if a ceiling fan motor is bad, follow these steps:

Ceiling fans with variable speeds can see reduced speeds if the motor is failing, or like above, the fan may refuse to work at all.

Can Ceiling Fan Motors Be Replaced?

Ceiling fan motors can be replaced, especially if it’s a type that simply plugs in. If it’s not, that’s a more in-depth repair you may wish to leave to a professional. Most ceiling fans are similar to a degree, but the inside of the motor housing dramatically depends on what model you have.

The Cost To Replace Your Ceiling Fan Motor

It costs between $85 to $300 to replace your ceiling fan motor, but it can go up to $450 if the fan and motor are high-end. Depending on the ceiling fan model, you may be better off buying a new ceiling fan. This is entirely up to you as the owner, however.

How To Change a Ceiling Fan Motor

High professional repair prices can make you opt to repair the motor yourself. It can’t be that hard, right? You need to first determine that it’s cheaper to repair rather than buy a new fan, and for cheaper fans, it’s probably not worth it.

If it’s a nicer fan, though, you might rather repair it. I caution against doing this if you don’t have some mechanical or electrical experience. In such a case, leave it to a professional.

At any rate, here are the steps to change your ceiling fan motor, should you decide to do so:

The rest of the steps depend heavily on the type of fan you have. Some fan motors simply plug into the housing, while others need to be unwired.

See the manufacturing details of your specific fan model to determine the necessary next steps.

Most ceiling fans will last around ten years, depending on how heavily they’re used, but that’s not a hard and fast number by any means. Anything electrical or mechanical will wear out as its components are used and suffer wear and tear.

They also suffer from environmental factors like humidity, friction, electrical damage from power surges, and a host of other factors.

A cheap ceiling fan that’s kept running day and night won’t last nearly as long as a high-end ceiling fan only used when people are in the room. In the former case, the fan may only last 3-5 years, if that long.

The fan in the latter example may last ten years or more.

It’s very frustrating to find out that your ceiling fan stopped working, though you may find it’s the capacitor or wiring instead.

In case the motor is bad, a repair can cost a decent chunk of change. A professional is a safer bet but pricey. Another possibility is to replace it yourself, which is only advised for those with some mechanical knowledge.