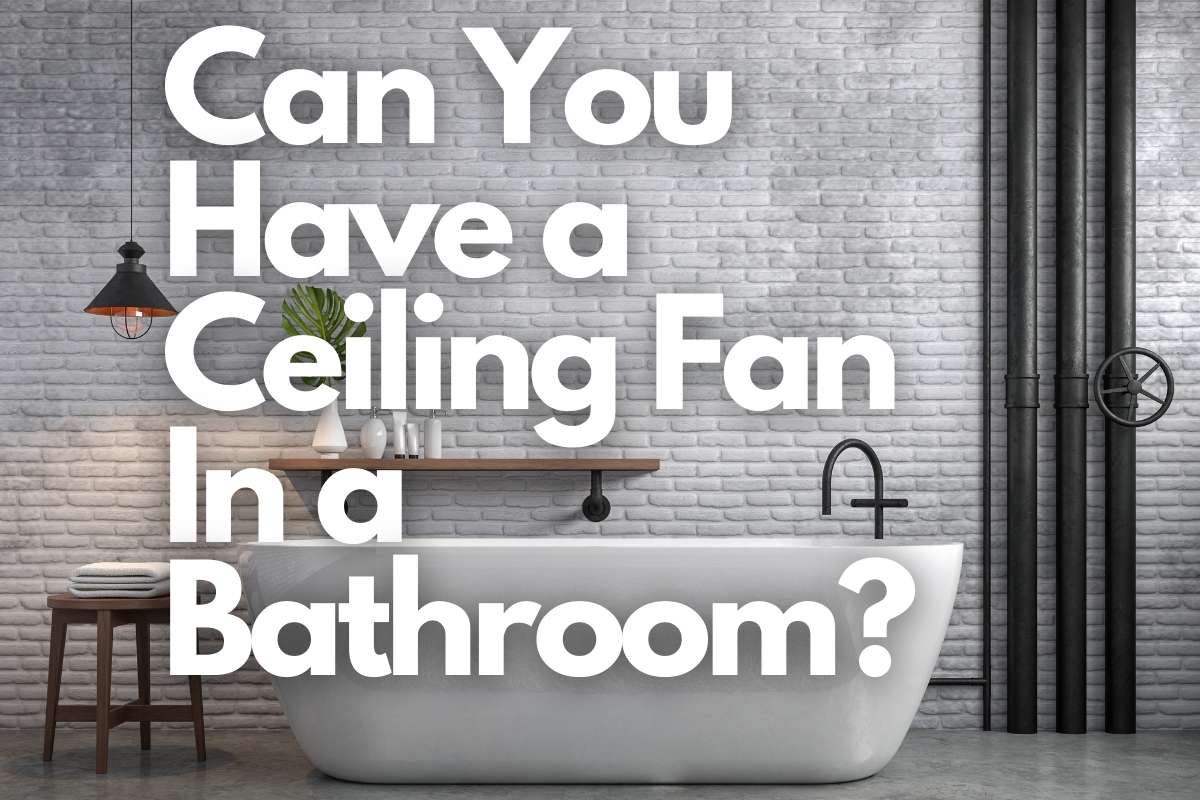 Want to add a fan to your bathroom but aren’t sure if this is possible? Here’s what you want to know.

Using a ceiling fan in a bathroom is perfectly fine as long as the fan is small enough and the fan is rated for damp or wet use. In case the bathroom doesn’t have a window, an exhaust fan might be better adding one isn’t always possible in which case a ceiling fan can provide air circulation.

Let’s see how and why a ceiling fan could work in a bathroom and which things to look out for.

What Type Of Ceiling Fan Works In The Bathroom?

Just to be clear, I’m talking about ceiling fans here and not exhaust fans built into the ceiling.

A bathroom is just like any other room with a few twists. The bathroom does have a few other challenges which we’ll talk about below. If you keep a few things in mind, using a ceiling fan in a bathroom is perfectly possible. The question if it’s the right choice for your bathroom will be discussed below.

Bathrooms are often quite cramped and there is a lot of liquid there by design. The water might not be on the ceiling but you never know where it gets and also, steam from a hot bath or shower is enough moisture to be problematic.

Ceiling fans have different ratings. Some are for indoor use, some for outdoor. However, the biggest difference between those types is the rating for how much moisture they can handle. There are; Dry, damp and wet rated ceiling fans. The wet rated types can survive a rain storm while the damp rated ones can handle some moisture but not direct water falling on them.

Suggested: Can outdoor rated ceiling fans be exposed to rain?

For a bathroom you want to avoid the ‘dry’ rated ceiling fans because even a steamy shower would be a problem in the long run. Go at least for a ‘damp’ rated one but a ‘wet’ rated fan would be the best choice.

The next problem is size. Ceiling fans are usually quite large and bathrooms can be small. Also take shower cabins and other tall things into account. In most cases a normal sized ceiling fan is going to be a problem. However, there are smaller versions that could work well. You want 2-3 feet of space between the tip of the blades and closest wall. If your bathroom is 8’ x 8’ in size, that means you can use a 48” fan at the largest. This isn’t the largest ceiling fan but you can find some good fans in that size. If your bathroom is only 5’ wide, you’re looking at 36”. While those are available, they do become more difficult to find.

Also, not all bathrooms have very high ceilings. The lowest possible ceiling you can legally (according to the building code) mount a ceiling fan on is 7’. Make sure you have enough headroom to stand up straight and preferably stretch your arms up without hitting the fan. There are fans with short or no downrods which moves the blade closer to the ceiling which is a good idea if you’re limited in height.

Also give some thought about how the fan is controlled. Remotes are easy but they might not survive too long in a bathroom. An old school pull cord works well but

Is a Ceiling Fan Useful In a Bathroom?

The cooling down part is usually not that important in a bathroom since a bath is usually refreshing although there could be situations where you would want to cool down. If you like taking long hot baths or even have a sauna while also living in a hot climate, cooling down afterwards could be important.

Bathrooms don’t only have showers and bathtubs though. A toilet is often also found in the bathroom. Let’s not get too graphic but sometimes you could use some airflow and cooling down while using the toilet. For those situations, a ceiling fan is actually a really good way to increase comfort.

Also take into consideration if you’ve got a window in your bathroom. A window that lets in outdoor air reduces the need for an exhaust fan. In most cases you should get a natural draft from having the window and door open. With the window, you can use the ceiling fan to increase circulation and dry it out faster. Without a window, an exhaust fan is going to be a better choice. However, if there is no exhaust fan, it’s not always easy to install one so in some cases a ceiling fan can do the job. But be aware that a ceiling fan just circulates the air inside the room if the door is closed. It doesn’t bring any new air into the bathroom like an exhaust fan would.

In general, ceiling fans for a bathroom should be rated for “outdoor” use which means that they can handle some water. While many bathroom fans should be quite small in diameter and be close to the ceiling because of the space restrictions of most bathrooms, that’s not necessarily the case. So let’s take a look at the best ceiling fans for different sized bathrooms.

If you’re the lucky owner of a bathroom of this size (or larger), you have a lot of choices available to you. You could possibly fit a ceiling fan of up to 72” in diameter although going for that size is not necessary for most situations. Also, you probably don’t want the airflow in the area you’re bathing so a smaller fan is usually best. A fan anywhere from 50”-60” is perfectly fine and provides more than enough airflow.

This is a really cool ceiling fan for a modern interior. It’s not cheap but the design and capabilities make it worth the price. It’s 60″ in diameter and rated for indoor and outdoor use. So it will work well in a larger bathroom. It comes with a wall controller but can also be controlled by Alexa or phone app so you don’t have to get up from the toilet to turn it on. It’s a beautiful piece that fits in any modern interior.

A classic ceiling fan that has a short downrod which works well for lower ceilings. It’s damp rated so not wet like the one above but this is still sufficient in most cases as long as you don’t aim the shower head at it. It’s not as fancy as the Vortex above but it’s also not nearly as expensive.

This is a pretty common size for a bathroom. Keeping 2’ away from the wall on all sides means you can fit a 48” diameter fan or smaller. As always, a little smaller is probably better to keep the wind out of the shower area but finding a smaller fan that’s outdoor rated does get a bit more challenging as you’ll see below.

This is a very nice, sleek looking 44″ ceiling fan that’s rated for wet use so it’s perfect for even the messiest bathers. It is simple but high quality and looks sleek. It comes with a remote control but can be made to work with Alexa and phone apps through an additional hub.

Find the Minka-Aire F786-CL on Amazon

Got a tiny bathroom but still want a ceiling fan? Your choices will be a bit limited. You’re going to have to deviate from the 2’-3’ distance from tip to wall a little. Even if you keep only 1’ distance on all sides, you’ll have to use a 36” fan. You can find 36” fans but finding one that’s rated for wet/outdoor use is a bit of a challenge.

Suggested: Are ceiling fans with short blades any good?

If you have a bathroom this size, consider a normal fan that’s just mounted to the wall or ceiling instead of a more traditional looking ceiling fan. These are basically floor standing fans but mounted in a different way. The benefit is that these are much easier to find, are cheaper and produce good airflow. On the other side, they don’t look as good and can be a bit noisier than ceiling fans.