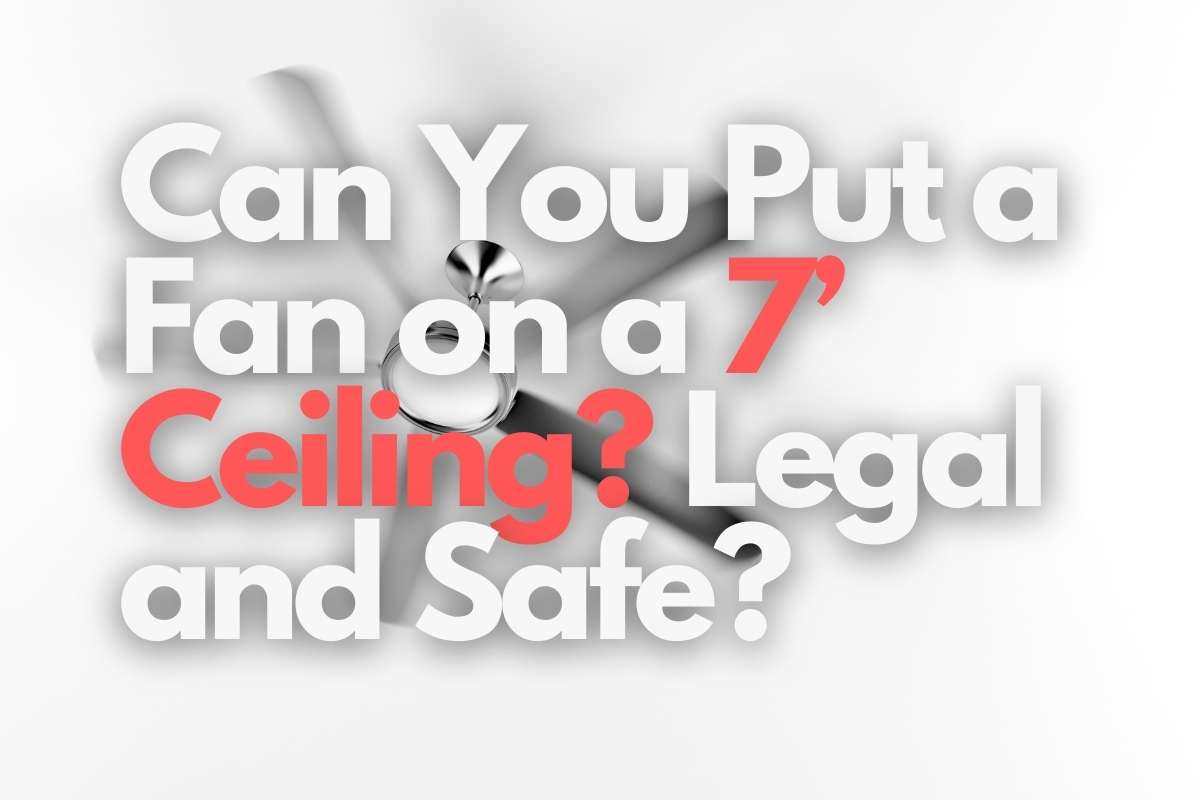 Ceiling fans have very specific safety codes, like room height requirements. If the ceiling is not tall enough, it can be dangerous and even cause concussions. So is it safe and legal to put a fan on a 7’ ceiling?

If you want to install a ceiling fan on anything less than 8’ (2.4m), you may want to keep reading. This article will tell you why lower ceiling heights for fans are unsafe, and how to install a fan on a suspended ceiling.

Why Is Putting a Fan on a 7′ Ceiling Considered Unsafe?

Putting a ceiling fan on a 7’ (2.1 m) tall ceiling is considered unsafe because it is against the minimum ceiling fan building requirements. People can easily get hurt if ceiling fans are too low to the ground.

One of the most common reasons is its height. Ceiling fans require their blades to be at least 7’ (2.1 m) from the ground. Achieving this blade height is almost impossible in a room below 9’ (2.7 m) tall.

Suggested: What are hugger fans?

Abiding by safety standards is important. The blades of ceiling fans must be installed at least 8’ (2.4 meters) above the ground, and the 7’ (2.1 m) blade restriction is a minimum requirement. Even at this height, people are still at risk for serious head injuries.

Huggers are devices that minimize the space between the ceiling and ceiling fan, but they do not eliminate safety risks. They are often used to make fans move closer to the ceiling, but this does not help unless the room is taller than 7′ (2.1 m).

Safety standards require that all fan blades are at least 7’ (2.1 m) above the ground. In a room with a 7′ (2.1 m) ceiling, it is impossible to install a ceiling fan without breaking safety standards. By going against these standards, everyone who enters that room becomes endangered.

People Can Get Hurt by Ceiling Fans

Placing a ceiling fan lower than the 8’ (2.4 m) safety standard is a fast track to getting injured. People can get hurt by ceiling fans in numerous ways, like hitting their heads and general carelessness.

Hitting your head on a ceiling fan sounds harmless, but it can lead to serious injuries like concussions, which induce:

Many neurological disorders can result from concussions, including epilepsy and brain degeneration. They can also result in behavioral disorders and psychological problems like anxiety and amnesia.

A Suspended Ceiling May Not Support Ceiling Fans

A suspended ceiling might be unable to bear the load of a ceiling fan.

There is often a hollow void above these lowered ceilings, and forcing construction can damage the building structure. To avoid catastrophe, do not install a ceiling fan on suspended ceilings. It does not matter if the fan is light or not.

The following are key signs that a ceiling cannot bear the weight of a ceiling fan:

Suspended ceilings often have pipework and wiring above them, which can make it difficult to perform construction on this area even if desired. When in doubt, consult with a contractor for the safest installation.

Suggested: How to find out if a lighting fixture can handle a ceiling fan

Is It Legal To Install a Ceiling Fan in a 7′ Ceiling?

Inspectors are allowed to come at any time to evaluate new residential or commercial builds. Not abiding by city codes can have any build torn down without a refund. To save money and labor, consult with a contractor before beginning any large build.

Contractors and architects are knowledgeable about ceiling fans and are more than happy to help.

How Can People Get Hurt From Ceiling Fans?

People can get hurt by ceiling fans in multiple ways, like hitting their heads and getting concussions. The medical injuries that occur from ceiling fans seem minimal, but they can be very serious.

Surprisingly, tall people are not the only ones who can get hurt by fans. People who carry things on their shoulders are also at risk of hurting themselves when they come in contact with a low-hanging ceiling fan.

Ceiling fans are more dangerous than people assume. The following are some of the ways that people can get hurt from ceiling fans:

Is It Possible To Install a Ceiling Fan in a Room With a Suspended Ceiling?

It is possible to install a ceiling fan in a room with a suspended ceiling by using a flush mount or shallow fan. However, if the ceiling fan blades will be below the 7’ (2.1 m) minimum, do not continue with full installation.

Shallow fans hug the ceiling so they can adhere to the 7’ (2.1 m) safety standards. This hugging effect is where the name “hugger fan” was coined.

Flush mounts move ceiling fans closer to the ceiling. Although flush mounts can minimize space between the ceiling and fan, they do not eliminate safety risks.

There are many ways people get hurt by ceiling fans, and most of these are because the fans go against regulation.

Installing ceiling fans in a 7′ (2.1 m) ceiling is not possible because it goes against safety guidelines and can endanger people’s lives. Even with shallow fans, the blades of ceiling fans in these rooms do not meet the seven-foot requirement.

It is possible to install a ceiling fan on a suspended ceiling if it still abides by the 7’ (2.1 m) blade guideline. Options like flush mounts and shallow fans can help make this possible.