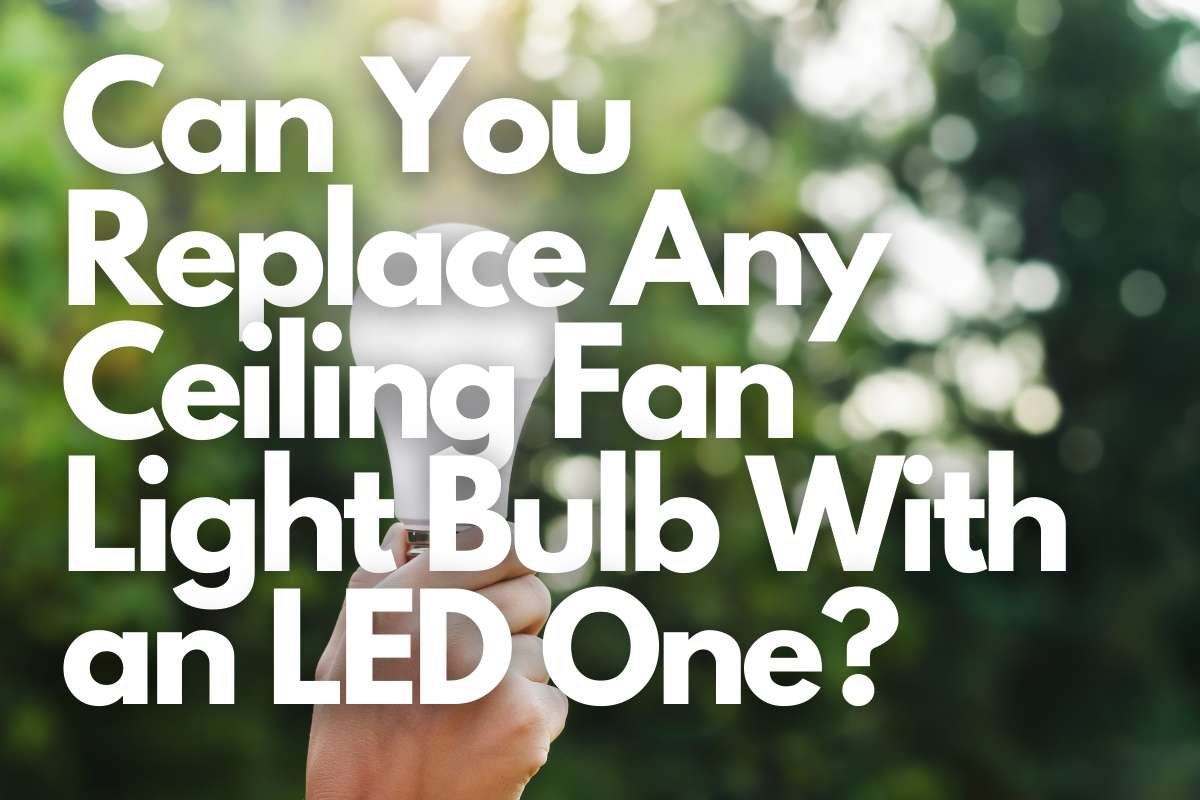 Ceiling fans improve the aesthetics of a room, while also providing ambient lighting and air circulation. Lighting, in particular, plays an important role in creating a calming atmosphere, but not all light bulbs are created equal. If you’re looking to improve energy costs, you might consider switching to LED bulbs.

You can replace any ceiling fan light bulb with an LED one—just make sure the LED is compatible with the functions on your ceiling fan. Many LEDs are not compatible with standard incandescent dimmer switches or remote-controls, and save more energy when using energy-efficient light sockets.

The key to switching to LED lighting is knowing whether your current light kit on the ceiling fan is compatible. Read on to determine how to make the switch and upgrade your home to an energy-saving LED light source.

What Kind of Ceiling Fans Can Work With an LED Light Source?

However, the kind of light your ceiling fan is currently using, especially if you own an antique or vintage design, may waste more energy than saving it. So it seems only wise to switch to a more energy-efficient light source – the LED!

Almost any ceiling fan today should be compatible with an LED light kit and you can find a variety of designs too. However, older build fans may have some trouble working smoothly with an LED light.

The standard dimmer switch of vintage fans can create too much power for an LED bulb. Since energy efficiency wasn’t top priority for the older models, the light kits may be built with sockets that take up more wattage. These fans may require some thought when thinking about switching to LED lights.

You can determine if making that switch will be relatively easy and error-free if you answer the following questions.

Does Your Fan Work With a Dimmer Switch?

The LED lights use less power than a dimmer switch, which requires a minimum power of 50W. When the LED light turns on, it won’t reach the minimum power needed for the switch, causing it to flicker and overheat and never dim entirely.

If an entirely separate line can operate your ceiling fan light kit to another dimmer switch, make sure to check if the LED you’re using is essentially dimmable. I recommend the Lutron Diva LED+ Dimmer from Amazon.com. This switch works with different brands of dimmable LED bulbs, allowing you to change the ambience in your home with a switch.

Alternatively, there’s the Lutron Caseta Smart Dimmer Starter Kit, also available on Amazon.com. This kit has all you need to set up your dimmable LED bulbs. In addition, the switch works with smart home devices, including Google and Alexa.

Do You Use a Pull Chain or Remote Control To Operate Your Fan?

Operating your fan with remote control is aesthetically pleasing and the better fit for a smart home for sure. Unfortunately, LED lights won’t work with a remote-controlled ceiling fan.

Home Depot doesn’t recommend using a remote control to operate your fan’s LED light as they’re not all built the same. Thus, while other light sources can work with universal remotes, LED falls short in this department. However, if you have a fan with a pull chain, an LED is possible!

Does Your Fan Vibrate?

If your current ceiling fan vibrates rapidly or makes loud noises when it’s turned on, this could damage the LED light fixture you choose to install. Reach out to a professional to find out what’s causing the extra sound or movement before installing a new light kit.

What Socket Does Your Fan Light Kit Have?

Your fan light kit likely houses an E26/E27 socket if your fan was built a long time ago and has an antique build. These are medium-base sockets, and energy efficiency isn’t their primary goal.

If you want to use an LED bulb in the same socket, you’ll need to search for one that matches the power used by a medium-base incandescent.

If your fan has an updated E12 socket that’s much smaller and modern in design, LED lights may prove more beneficial than you think. The incandescents that come in this style may not generate the amount of light required. The exact size LED bulb can generate more light while conserving energy in an E12 socket.

If your ceiling fan meets the above requirements, replacing your ceiling fan light with an LED bulb is deemed safe. But why choose an LED light for the switch? As you read on, we’ll tell you what benefits you can gain by switching out the light source in your home for LEDs.

Why Should You Replace Your Light Bulbs With LEDs?

Energy efficiency is proven to be the most effective method in decreasing national energy use and minimizing carbon emissions.

According to a research paper from ScienceDirect, the cumulative impacts of residential energy efficiency standards are expected to have a benefit-to-cost ratio of 2.71:1. Thus, saving energy by switching to an efficient light source seems to be an intelligent choice.

You should replace your light bulbs with LEDs because according to Energy.gov, residential LEDs, especially Energy Star rated products, use at least 75% less energy and last twenty-five times longer than incandescent lighting.

Switching to energy-efficient lighting is a simple, inexpensive way to save on energy costs and upgrade your home.

Before installing a new light source in your ceiling fan, ensure that the fan is compatible with LEDs. Incandescent dimmer switches and older, remote-controlled ceiling fans should not be used with LED light bulbs. Finally, to increase energy-saving, switch to energy-efficient light sockets when purchasing an LED lighting kit.