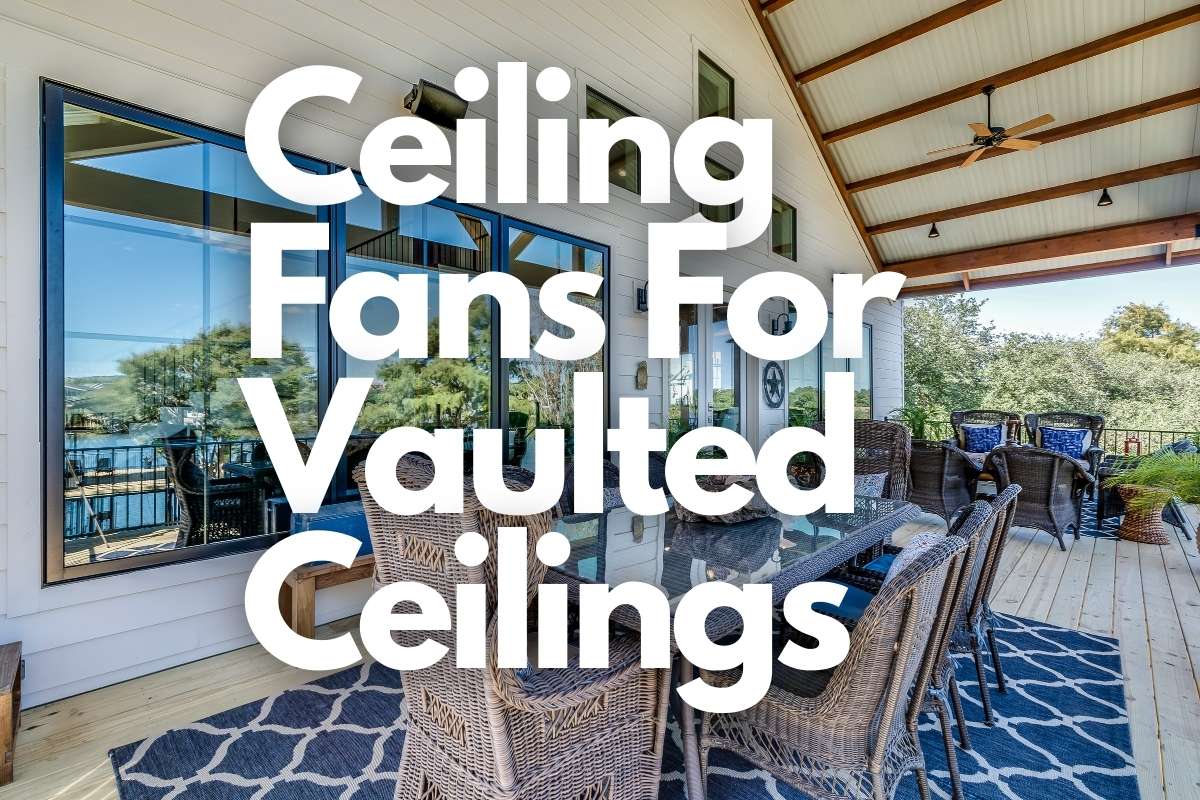 It’s possible to mount a ceiling fan on vaulted ceilings by either using a fan that can be mounted on a sloped surface or by installing a mounting box. In most cases a longer downrod should be used to create enough clearance and to be able to use a larger fan with the blades at the correct height.

If you want to know more about how to mount ceiling fans on cathedral ceilings and how to figure out the right size and mounting height, keep reading below.

Can You Use Ceiling Fans On Vaulted Ceilings

Vaulted ceilings can look amazing in many cases but it does complicate some things a little compared to a normal ceiling. Using ceiling fans is one of those things that can get a little complicated.

However, in many cases it’s possible to mount a ceiling fan on a vaulted ceiling. Either there is a flat spot somewhere, usually a beam on the top or it’s possible use a ceiling fan that can be mounted on sloped parts of the ceiling. Some ceiling fans come with the option to mount it at an angle out of the box. Usually that is limited to about 30 degrees. However, there are adapter and mounting kits the can help you mount ceiling fans on ceilings that have steeper inclines than that. More on those later.

Not all vaulted ceilings are the same. Some of them will have a beam or other flat spot at the peak. This can be used to mount a ceiling fan if it’s wide enough. However, that means you probably need a downrod that’s quite long. Especially if the roof has a steep angle.

However, it’s just not always possible to mount it exactly on a flat spot in the middle of the room. In that case there are some options.

The first option is a ceiling fan that is built to handle being mounted at an angle. It might take some searching to find one that’s appropriate for your situation. E.g: right size, design, rod lengths.

Some brands sell adapters to mount their ceiling fans on ceiling with a bigger angle. However, these adapters are not universal, they’ll have to be used with a ceiling fan that is compatible, usually from the same brand.

Modern Forms is a brand that makes really nice looking fans and an adapter to mount those fans on surfaces with an angle up to 45 degrees and some even 60 degrees. This should be plenty for pretty much any ceiling. Both the adapters and their fans are high quality and well designed. you’ll be able to find something that fits in your space.

Their fans are wet rated so they can also be used outside. They have DC motors which means more energy efficient and quiet. On top of that they are controllable by smartphone which is a pretty cool touch.

You can find the compatible ceiling fans here on Amazon

The last and maybe best solution is to simply create a level surface mounting point. There are mounting boxes that are meant to be installed at the peak of a vaulted ceiling. This creates a small flat surface to mount the fan on. This allows for a pretty clean install that keeps everything symmetrical.

However, installing these mounting boxes is not a quick job in many cases. It does require a few hours of your time to install neatly and securely. However, after that, it’s the best solution for many people. You can mount your ceiling fan at the peak of your vaulted ceiling and that means you have the choice of many more ceiling fans. As long as the fan you choose has different downrod lengths available, you’re good to go.

The Arlington mounting box (Amazon link) is the best option you’re going to find. It is a solid piece that can hold ceiling fans that weigh up to 70 lbs. which is more than most normal ceiling fans weigh.

Mounting is one thing, getting the sizing and spacing right on a vaulted ceiling is another complication. Again it’s not impossible to figure out but it’s a touch more complicated than on a normal ceiling.

How To select a Ceiling Fan For a Vaulted Ceiling

How can you pick the right ceiling fan for a vaulted ceiling? It’s actually not that much more difficult than for a normal ceiling but there are a few things you should take into account.

The actual measurements of where to place a ceiling fan and how much distance to keep from different parts are actually the same as with a flat ceiling. Actually getting those distances can be a bit difficult though.

Here are some guidelines to placing a ceiling fan;

As you might understand from this, on most vaulted ceilings, you’ll have to plan a little more carefully than on the average flat ceiling. Because the further you go towards the peak of the roof, the less space there is and the smaller the fan can be.

However, the further the blades are down from the mounting point, the more space there is and the larger a fan you can use.

For that reason you want to get a fan that has a long downrod and preferably different length downrods are available. Downrods are the little rod that connects the motor to the blade assembly. Make it longer and the blades hang down further from the ceiling. They’re not difficult to DIY but for the best results and to keep the warranty, you’ll want to use a downrod the manufacturer approves of or in other words; their own.

Here’s how to figure out which size fan you can use on a vaulted ceiling and the optimal mounting spot:

A good starting place is to measure how much width you have available at 9’ above the floor. (We’ll end up about 8’ off the floor.) Use the smallest width. If there are beams sticking out, measure between the beams.

Use the width of the ceiling at 9’ and subtract 4’ (2 feet on both sides of the fan). That’s the maximum diameter fan you should use.

By taking 2’ from both sides, you also create enough distance from the tip of the fan to the ceiling in most cases. Unless your ceiling has a very shallow angle, you will have plenty of clearance. If you want to be sure there is enough clearance, use a downrod that places the top of the fan blade  two inches or so below the 9’ mark (or whatever height you measured at.

Make sure it’s the TOP of the blades that are at 9’ high or just below. The fan blades are angled and often there is a light kit or piece of the shroud that sticks out below the blades. By mounting the top of the blades at 9’ high, the lowest point of the fan will likely be around 8’6”, depending on the model. This is the perfect height for most situations.

Of course if you want the ceiling fan to be higher or lower, you can use the same procedure, just at a different height.

As should be clear from the above; if you use a flat mounting surface, you can use any type of ceiling fan you like but there should be different lengths downrod available to make it fit your space properly.