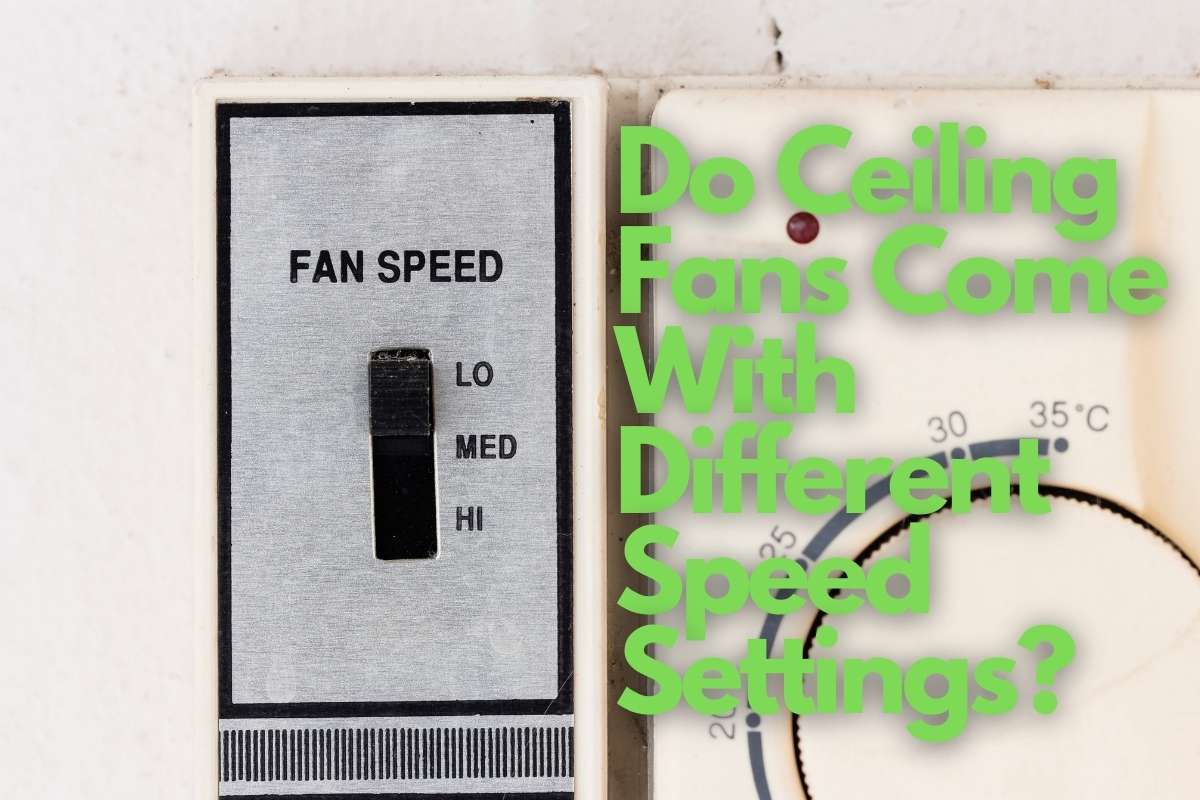 When you look at listings for ceiling fans, you might notice different fans have different speed settings. What do they do and does the amount of settings say anything about a fans performance?

Ceiling fans have different numbers of speed settings. Three speeds is the most common but more settings is possible, especially for larger (60”+) fans. The amount of speeds has no relation to the maximum speed or how much airflow it can produce. CFM numbers are a better indicator of performance.

Let’s find out what speed settings do and how important they are.

Do Ceiling Fans Have Different Speeds?

Different ceiling fans come with a different amount of speed settings. Some fans are regulated steplessly by a know but most of then come with presets for speeds. Many fans have three or four settings but there are some with up to 9 different settings. So there are differences in the amount of speed settings a fan can have. There are pretty much no fans that have only one speed.

The speeds obviously control how fast a fan spins. The higher the setting, the faster the fan rotates. And the faster a ceiling fan rotates, the more airflow is produced.

However, the speeds are relative. Setting #1 on one fan is not necessarily the same speed as speed #1 on another fan. And similarly, using the highest setting doesn’t mean the fans will spin at the same speed either.

The speed settings should be seen as low/medium/high (and some in between if there are more settings) but those settings don’t refer to any universal speed or airflow number. The max setting of a ceiling fan is just as fast as it will spin. And some fans can spin faster than others.

A faster spinning fan doesn’t necessarily mean that that fan produces more airflow though. That also depends on the size, shape and pitch of the blades.

Suggested: Can you put longer blades of a ceiling fan?

In the end, most people don’t actually care about how fast a ceiling fan can spin. It’s what that faster speed produces: more airflow. The faster you spin the same fan, the more airflow it will produce and the cooler you will feel.

Having speed settings is great because you can’t change the fan if you want more airflow. You don’t always want it to run on the max setting since it can just be too much. Toning it down is necessary. In most cases three settings is going to be enough. Especially for normal (+-48”-60”) sized fans, three settings will be enough. But more than three is not a drawback in any way and if your fan has more settings, that’s perfectly fine.

Large fans (60”+) should have more speed settings. That’s because large fans are usually capable of producing so much airflow, you want a bit more control over how much you’re getting.

However, a 72” fan can produce more than 10000 CFM. If this fan only has three settings, it would probably produce 2500, 5000 and 10000 CFM at the different settings. The steps in between are just too big to find the right setting. So with larger fans at least 5 settings is desirable.

Suggested: Is it bad to run a ceiling fan at full speed 24/7?

What Impacts How Fast a Ceiling Fan Can Spin?

So speed settings are good but can’t be compared to compare ceiling fans. But what factors make that one ceiling fan can spin faster than another? There are a few main reasons but they are all related to one thing; Motor power vs. how much power it takes to spin the blades at a certain speed.

Suggested: Does the amount of blades on a ceiling fan matter?

A fan with fewer blades will usually be able to spin much faster than one with more blades. That’s because there is less drag and less weight for the motor to move.

So to make a ceiling fan spin faster, you can either use a stronger motor or use blades that create less drag. However, the size, shape and pitch of the blade also impacts the amount of air that blade can move. So by changing it, you might have a faster spinning blade but it doesn’t necessarily move more air.

That said, you can’t really see any of these things when just looking at a listing for a ceiling fan. A much better indicator of what you can expect is expressed in airflow. In most listings for a ceiling fan the motor power and drag are not things you can find. The airflow is often advertised though. The maximum amount of airflow is expressed in CFM (cubic feet per minute). If you’re wondering how much CFM you need, click here.