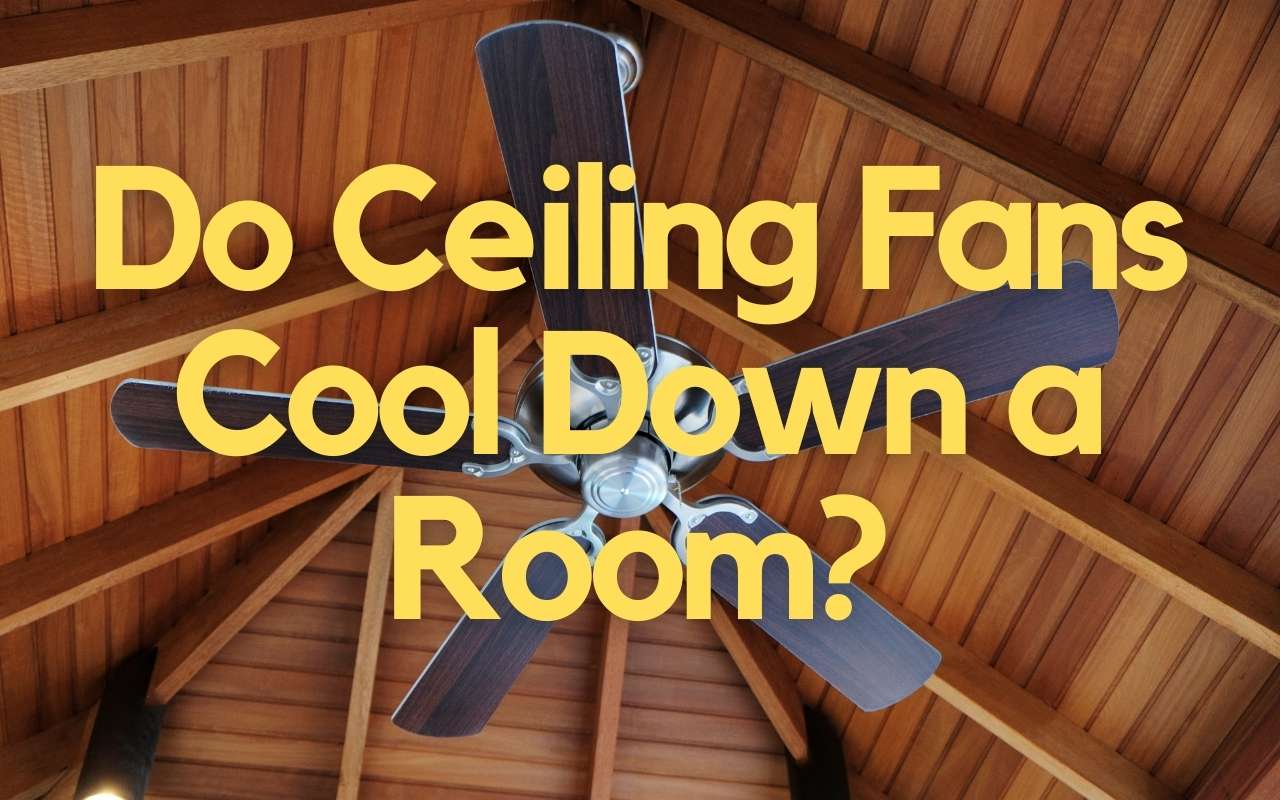 Ceiling fans are great in the summer to cool you down. But do they actually cool down a room? How and what do ceiling fans cool down and are they any good at it? Let’s find out.

Ceiling fans don’t cool down a room. They cool down people and pets by moving the air around the room, creating a refreshing breeze. Your body loses heat by convection. The sweat on your skin quickly transfers the heat from your body to the air, making you feel cooler. Use A/C to cool the air.

But is there any benefit to keeping the ceiling fan on if you’re not occupying the room? Read on to learn more about ceiling fans and how they work exactly.

Why Don’t Ceiling Fans Cool Down a Room?

Ceiling fans don’t cool down a room because they don’t have any active cooling elements. They can only circulate the air around the room, which cools down the occupants, but the overall room temperature stays the same.

It’s intriguing how much a ceiling fan makes you feel cooler without actually lowering the temperature at all. An air conditioner cools your room down by removing the hot, humid air inside. That’s why air conditioners have an outside unit that leaks a bit of water, which used to be water vapor in your room.

As you can tell, a ceiling fan doesn’t have an outside unit. It doesn’t dry out the air either, but it does dry the sweat on your skin, making you feel cooler. You can leave a ceiling fan on for hours, but it won’t reduce the temperature in your room whatsoever. Even if you have it running at the lowest speed, it’s still pointless.

The only way any fan could cool down a room would be by opening a window and placing it nearby to draw in cool outside air. I do this all the time in the summer, and it works great! Unfortunately, a ceiling fan can’t do that. It only circulates the air around the room. It could create a refreshing breeze when the windows are open, though. If that’s the case, leaving the ceiling fan on for 15-20 minutes would make sense.

Does a Ceiling Fan Make My Room Hotter?

Your ceiling fan makes your room slightly hotter. It does not generate a lot of heat, but it increases the temperature in your room by 1-2 degrees each hour. The increase in temperature is not very noticeable because the ceiling fan cools you down simultaneously.

So, how exactly does a ceiling fan make your room hotter?

The single-phase induction motor generates heat as it spins the fan blades. The engine converts electrical energy into mechanical energy, which converts into thermal energy that radiates into the room. But then again, the difference is minimal. Even if you keep the ceiling fan running all day long, the heat will escape long before the motor can make the room noticeably toasty.

If your ceiling fan is on even when nobody is in the room, you should turn it off. It’s wasting electrical energy. Plus, you’ll have to pay the electric bill. The more power your ceiling fan uses, the more it heats your room. An average ceiling fan draws between 55 to 100 watts. If it has an LED light fixture, it adds 5-10 watts.

If you want an energy-efficient ceiling fan, get an Energy Star-rated one. They are certified to be more efficient than your run-of-the-mill ceiling fans. The Monte Carlo 5CY60BK Ceiling Fan from Amazon.com is a gorgeous premium ceiling fan that consumes only 71 watts. For a 60″ (1.52 m) fan, that’s an impressive feat. Also, the five blades are durable enough to mount the fan outdoors.

How Does a Ceiling Fan Make You Feel Cooler?

A ceiling fan makes you feel cooler by disrupting the stale air around you. The fan creates a wind-chill effect. Cool air from one part of the room displaces the warm air near you. Also, the breeze causes sweat on your skin to evaporate more quickly.

The process through which your body loses heat, in this case, is called conduction.  In a nutshell, conduction happens when your body is in physical contact with air, which causes heat transfer. But you don’t have to know a lot about physics to understand this.

Let’s explain it this way: It’s summer, and you’re taking a stroll near the beach in the middle of the day. It’s 100°F (37.7°C) outside, so you feel like the sun is burning your skin. Suddenly, a gust of fresh air hits you. You feel much cooler even though the air wasn’t any cooler. The same thing happens when you turn your ceiling fan on. The temperature stays the same or even increases over time, but you feel much more comfortable. So, a ceiling fan is a cheap way to cool down using your own body and thermodynamics.

Should You Run Ceiling Fans When Not in Room?

If you have mildew issues in your room, you could leave the ceiling fan on. The circulating air will dry the corner out more quickly, but it won’t reduce the air humidity in the room.

You can combine your ceiling fan with a dehumidifier to achieve that. The Pro Breeze Electric Mini Dehumidifier from Amazon.com is perfect for that task. It’s small, effective, and portable. It’s also very quiet, so you can leave it running even when you sleep.

The dehumidifier will dry the air out while the ceiling fan stirs the air the whole time. The dry air hitting your skin feels incredible during scorching hot summers. So, you won’t even need a power-hungry AC!

Suggested: Is it bad to run a ceiling fan at full speed?

Ceiling fans are effective at keeping you cool because they create a mild draft in your room. A ceiling fan can cool down multiple people in a single room, which is in contrast to other types of fans that can only make one or two people more comfortable.

Ceiling fans are a must in every household. They can cut down your power bill by 5-10% both in summer and winter. They are very effective because they cool you down naturally by evaporating the sweat on your skin. If a ceiling fan is your only option to cool down, it’s still much better than nothing. It’s a good way to prevent a dangerous heat stroke.

According to Energy.gov, ceiling fans are the most effective circulating fans. A large ceiling fan is effective even when you keep it at a low speed. You can create a natural breeze that keeps you comfortable when cooking, watching TV, or browsing social media.

Suggested: Can you put longer blades on a ceiling fan?

Ceiling fans are power-efficient devices that can keep you cool. They only consume as much power as an incandescent light bulb. Nonetheless, they are very effective at making your room feel more comfortable.

Note that not all ceiling fans are equal. Some consume twice as much power as others. Here are some factors that affect power efficiency:

I already mentioned that Energy Star-rated ceiling fans are generally more power-efficient because they are designed with power efficiency in mind.

However, a smaller ceiling fan can be very efficient too. The Hunter Dempsey Indoor Low Profile Ceiling Fan from Amazon.com is a 44″ (1.11 m) fan with a light fixture that only consumes 60.5 watts. The feature-packed fan also comes with a handheld remote and a reversible motor.

Generally speaking, a larger ceiling fan is more efficient than a smaller one, even if it uses more power overall. You can lower the speed of a larger fan to match the power consumption of a smaller one with the option to turn it up if you want.

Suggested: Are cheap ceiling fans worth the money

Should I Run a Ceiling Fan With an AC?

You should run a ceiling fan with an AC because the fan helps distribute the cool or warm air throughout the room. You can lower your cooling or heating costs by 5-10% just by turning your ceiling fan on while the AC is running. However, you must adjust your thermostat to make it work.

In a nutshell, a ceiling fan helps you save money by making you feel cooler. Your AC is only good at cooling one part of the room, but the ceiling fan stirs the cool and warm air.

The result is that you get to feel the coolness of the AC. So, you can adjust the temperature on your thermostat by a couple of degrees and turn the ceiling fan on. Ceiling fans use way less power than ACs. Combine the two to get maximum cooling in summer and heating in winter.

Note that you won’t save any money if you don’t increase the temperature on your AC. Also, there’s no need to make your room 60°F (15.5°C) in the middle of a heatwave.

Suggested: When do ceiling fans go on sale?

How To Use a Ceiling Fan To Lower My Energy Bill?

If you have a reversible fan, run it counter-clockwise in summer to draw hot air away from you and towards the ceiling. Do the opposite in winter because all the hot air will rise to the top.

According to Save on Energy, you can save up to 15% on heating by turning the ceiling fan on. So, it’s worth turning it on in winter too, but make sure you don’t feel a cooling effect by wearing a long sleeve shirt.

The Emerson Kathy Ireland Low Profile Ceiling Fan from Amazon.com is a great choice. It has five beautiful blades with an oil-rubbed bronze finish, and the motor turns in both directions, making it suitable for cooling and heating.

Ceiling fans can’t cool down a room. They actually make the room slightly hotter because the engine in the fan heats up.

However, a ceiling fan effectively keeps you, your family, and your pet cooler by stirring the stale air around you and accelerating evaporation.

You can cool down a room with a ceiling fan only in combination with an AC. I recommend that you turn on both and increase the temperature on your thermostat to save power. You’ll feel the refreshing air from the AC directly on your skin.

link to Does the Number of Blades on a Ceiling Fan Matter?

Ceiling fans are an effective way to circulate air in the home and keep a room cool, and in fact, about 15 to 19 million ceiling fans are sold every year. But how do you know which fan to buy? Many...