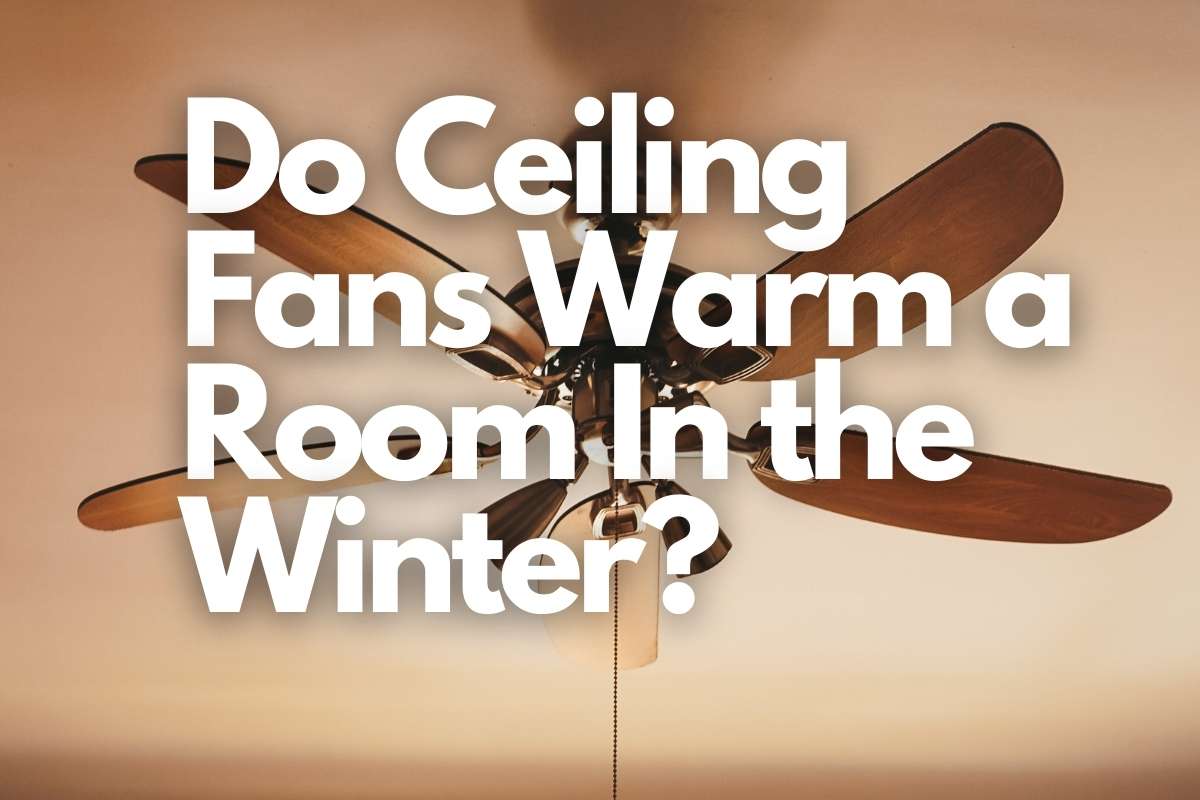 Is your ceiling fan doing nothing for half the year? You might be missing out on some almost free heat and comfort in the winter with a simple change.

A ceiling fan can save energy in the winter by distributing warm air that gathers under the ceiling throughout the room. This equalization of temperature results in people in the lower parts of the room feeling warmer. It is necessary to reverse the fan direction to accomplish this.

Let’s see how a ceiling fan can help you feel warmer and what you have to do to make use of this ceiling fan feature.

Should You Turn On a Ceiling Fan In The Winter?

Warm air rises up so it collects in the top of the room while the cool air sinks to the bottom. A ceiling fan can circulate the air in a space which equalizes the temperature in the room and effectively warms the air in the bottom of the room where people actually are.

Suggested: How much CFM does a ceiling fan need?

It might seem a little counterintuitive to turn on a ceiling fan in the winter. Ceiling fans are usually used to cool down people and pets in the room when it’s hot. In the winter you don’t need that draft to cool down. In many cases you want the opposite in the winter.

There is a good reason why you should turn on your ceiling fan in the winter though. Hot air rises up. So the heat that is in your room rises to the top and the cool air to the bottom. Since most people live in the bottom half of their room, that cold air is what you feel.

There can be a few degree differences in air temperature from the lowest to the highest point of the room. The higher your ceilings, the bigger the difference will be. But if you have a ceiling fan it’s actually really easy to equalize the temperature in the room.

What a ceiling fan does is circulate air in a space. This way the air mixes and distributes through the room and so equalizing the temperature so it’s the same everywhere. This has as a result that the air in the highest point of the room is a little colder but the air in the lower areas is warmer. The lower parts is where you actually are so it feels warmer to you.

Suggested: Is it OK to run a ceiling fan at high speed?

How To Save On Your Heating Bill With a Ceiling Fan

So by just turning on the ceiling fan, you actually benefit of the average temperature in a room. This means you can leave  the thermostat at a lower temperature and still feel just as comfortable. Running a ceiling fan at a low speed (especially one with a modern DC type motor) uses only about 10 Watts depending on size and quality. Any type of heating uses way more energy than a ceiling fan.

Suggested: How much do ceiling fans cost?

Which Way Should a Ceiling Fan Turn In The Winter?

Since a draft could make people and pets feel colder, it’s best to reverse the direction of the ceiling fan from counter clockwise to clockwise so it sucks colder air up and circulated the warmer air along the sides of the room. This equalizes the temperature in the room without creating as much as a draft.

It’s important to make sure your ceiling fan is turning the right way in the winter. In the summer you want the air column from the fan to push down on you so you get the draft. This draft helps evaporate your sweat faster and so cools you down.

In the winter you won’t be sweating much but the draft effect will still cool you down more than you want and the better temperature distribution is not enough to counteract this. That means in the winter, your fan should push the air up. This pushes air up against the ceiling. The ceiling is where most of the warmer air concentrates. This warmer air gets distributed throughout the space this way. And you don’t have the draft that can be uncomfortable.

It depends on the specific ceiling fan which direction is up and which is down. However, most ceiling fans push air down when turning counter clockwise and pushes air up turning clockwise.

In the summer you’ll also run the ceiling fan at a higher speed to get that strong airflow. In the winter you just want the minimum amount of airflow to mix warmer and cooler air. The lowest setting will be enough to do this with most fans.

Suggested: Is it safe to run a ceiling fan 24/7

How To Reverse a Ceiling Fan Direction?

Many ceiling fans have a switch on or under the motor shroud that changes the direction the fan spins. Usually this is a small and simple slider switch. Usually there is no indication which side is which. If the switch moves sideways, the fan will generally turn the way the switch is pointing.

This switch is often found on the shroud of the motor (the piece that’s mounted to the ceiling). On some models it’s hidden under that shroud. So if you don’t see it on the shroud, it’s usually pretty easy to remove and see if there is any switch there. However, not all ceiling fans have this option. So if you’re looking to buy a new one, make sure to check if this feature is present.

If there is a switch, it’ll be a small switch that has two positions. One position is clockwise, the other anticlockwise. Usually there is no indication so you just have to know or test. It’s not that difficult to figure out what’s going on. Just see which way the airflow is going now. Flipping the switch will simply reverse it.

The Reiga 52″ ceiling fan (Amazon link) is a great option if your current ceiling fan doesn’t have a reversible motor. It has a clean, modern design, energy efficient DC motor. It’s quiet and great for the average bedroom with a programmable built-in light. You can easily choose a warmer or cooler color depending on your mood.

Don’t have a humidifier but got really dry air in your room?Simply putting a bowl of water in the room might seem like a solution but does it work? Here’s what you want to know.  A bowl...

Continue Reading
link to Can You Put Essential Oils In A Humidifier? Scent & Humidify

A humidifier helps increase comfort in a dry space and can even help with some health conditions. But wouldn’t it be even better if you could add some essential oils to the humidifier to bot...