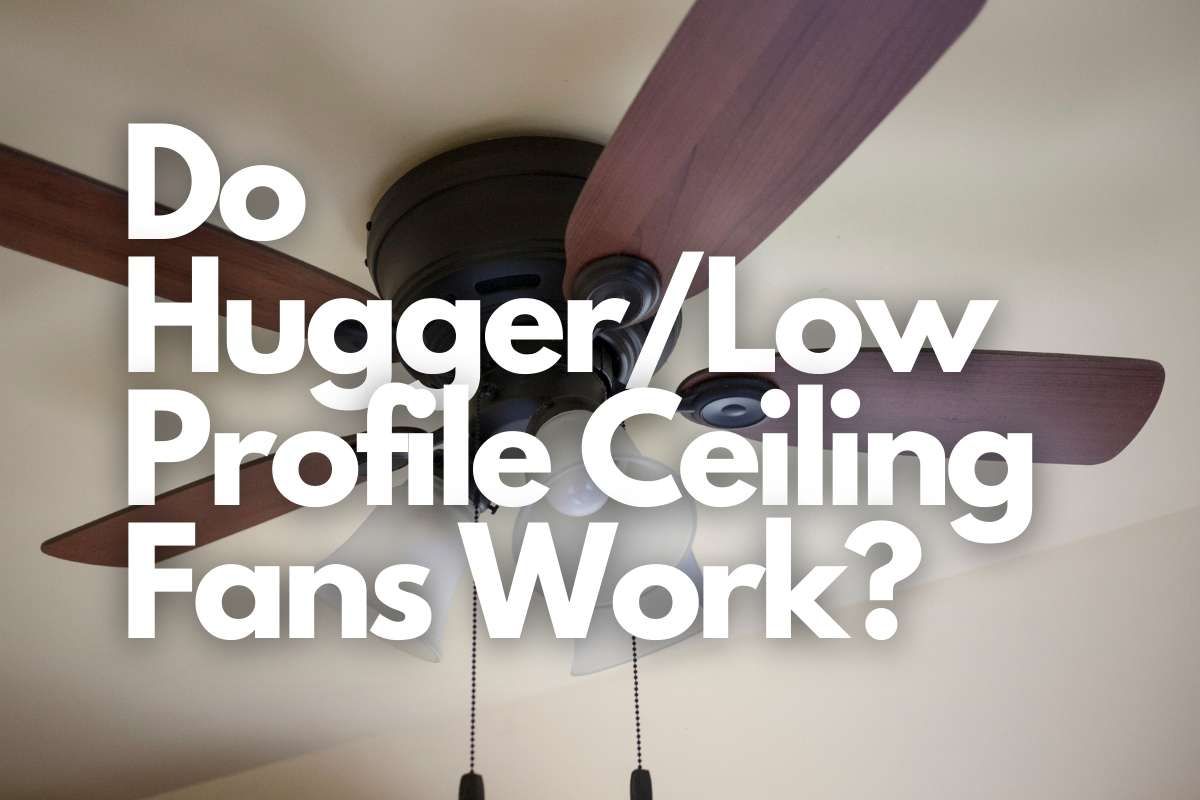 Low profile fans are convenient and common. But do they work as well as normal ceiling fans with a downrod? Let’s find out.

A well designed hugger fan will work just as well as a ceiling fan with downrod. The reduced clearance between the blades and ceiling potentially reduces airflow and efficiency but in a well designed model this effect is very minimal and unnoticeable in many cases.

Below I’ll explain in more detail what the potential problems are, how well hugger fans work and how to minimize the downsides.

Hugger or low profile fans (same thing), are fans that don’t have a downrod and try to protrude as little as possible into the room. The blades are closer to the ceiling on most hugger fans than on fans with a downrod.

Suggested: What is a hugger fan?

The downrod is the little rod between the canopy (part of a ceiling fan that mounts to the ceiling) and the blade assembly. These rods can have different lengths in order to install the blades at different heights. Hugger or low profile fans are designed so they don’t need a downrod and the canopy and blade assembly is one piece. This means the distance from the ceiling to the bottom of the fan is less.

There are some potential problems by making a ceiling fan very low profile (more on that below) but if you get a fan from a well known brand, they are highly likely to be properly designed and will work very well.

The are potentially a little less efficient and flow a bit less air but once again, with a properly designed model, this is not a problem. Especially in situations where max airflow isn’t the most important and you’re not going to run the fan at max speed, hugger fans are a great solution.

While hugger fans work well, they are not as good as some other option. If you compare it to a ceiling fan with a downrod, there are a few downsides.

The problem with many hugger fans is that they don’t leave a lot of clearance between the ceiling and the top of the fan blades. This has some implications for the airflow.

A ceiling fan blade scoops up the air and pushes it down (or up in the winter). That means that air is taken from next to the blade and pushed down. That means air from above the blades has to be sucked down to fill that low pressure area. Of course that means that in turn, air has to flow from the sides to above the fan. It can’t come from directly below because the fan is pushing the air the other way in that area.

With a hugger fan, there is simply less space between the ceiling and fan blade which means that there is less space for air to flow back above the fan. Less air above the blades results in less air being pushed down because there simply isn’t enough.

For that reason, hugger fans tend to flow a little less air and do so less efficiently than fans with a longer downrod. It’s not a gigantic difference but worth noting.

This really becomes an issue if there is less than 8” of clearance between the TOP of the blades and the ceiling. 10” or more is better. Many low profile fans actually try to give you about 8” of clearance although often it’s a little less.

To make sure you get the best out of your profile fan, make sure there is plenty of clearance from the tip of the blade to the walls. Air doesn’t like to take sharp turns while moving. Giving it some space to maneuver outside the fan blades will help. With normal fans, the minimum distance from the tip to the nearest wall should be at least 18”. With a low profile fan, 2’-3’ is good.

Is a Low Profile Ceiling Fan Good For You?

So hugger fans flow a little less air than a fan with proper downrod and can be a bit noisier. But some situations do require the use of one. Is your situation the right one for a hugger fan?

The main consideration is your ceiling height. There are some downsides to using a low profile/hugger fan but in some cases you have to use one if you really want a ceiling fan and you’ve got a ceiling that’s quite low.

The lowest a ceiling fan’s blades should be is at 7’ from the floor. So if you’ve got 8’ high ceilings, most ceiling fans with a downrod will be too low. In many places it’s against building codes to hang a ceiling fan with the blades lower than 7’ and for safety, you really shouldn’t be doing it anyways.

Ideally the blades of a ceiling fan would be 8’-9’ from the floor. 7’ is workable but you have to be careful. It means someone that’s 6’2 tall and has a tall hairdo would get caught in the blades. 6’2 is tall but also not exceedingly rare.

Anyways, the only way to keep enough clearance under the fan with 8’ high ceilings is to use a hugger fan. The vast majority of fans with a downrod will come down more than a foot from the ceiling which means they are out of the question. Luckily there are a lot of low profile ceiling fans to choose from so it’s not a big deal.

Also, how much airflow do you actually need? Hugger fans tend to be a touch less efficient and flow less air but if you’re getting enough to stay cool, it’s fine. As mentioned above, low profile fans are great in combination with air-conditioning. With A/C, you just need the fans for air circulation. Yes, downrod fans are potentially better at this but at lower speeds, which you would use in combination with A/C, the difference is minimal.

Remote controls are always lost and you don’t want to get up to turn your ceiling fan on/off. Wouldn’t it be great if you could control your ceiling fan and light with an app without having to...

Continue Reading
link to What Is The Minimum Height To Mount A Ceiling Fan?

Got a low ceiling but also want the cooling effect of a ceiling fan? You might run into some problems. What’s the minimum and ideal height to mount a ceiling fan at? Here’s what you want to...