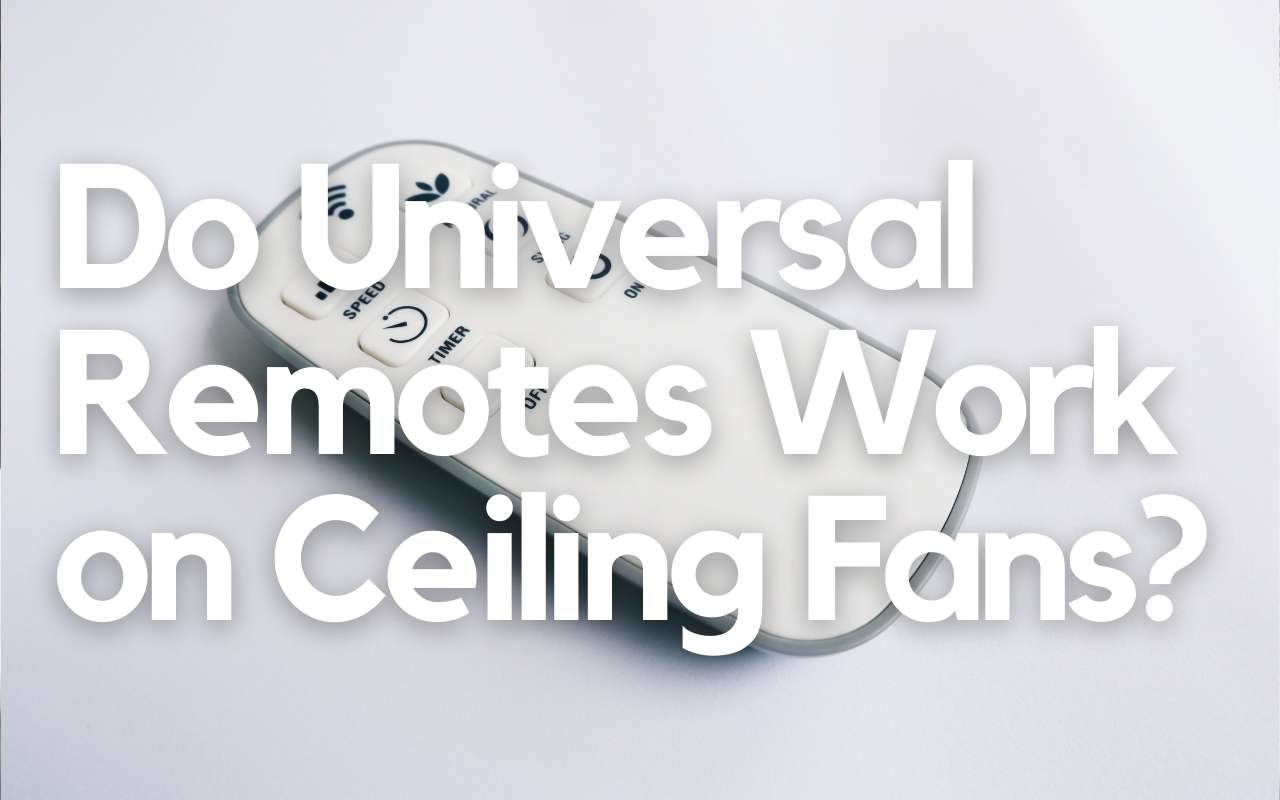 Older, pull-chain ceiling fan models require users to pull a chain switch to turn the lights and fan on and off and adjust the fan’s speed. In today’s world of home automation, these pull-chain ceiling fans are outdated and inconvenient. Many homeowners are looking to upgrade their ceiling fans to make them easier to control, and manufacturers are taking note.

Read on to learn more about remote-controlled ceiling fans and how to control a pull-chain fan with a universal remote.

A universal ceiling fan remote transmits a signal to a receiver that a user installs in their ceiling fan’s canopy. The signal from the remote connects to the receiver and “tells” the fan what to do.

Universal remotes may also be used with newer ceiling fans if the included remote is misplaced. However, before purchasing one, ensure that it’s compatible with your ceiling fan’s brand.

Suggested: How can you turn a ceiling fan on/off if the remote is broken?

As mentioned in the previous section, to turn a regular ceiling fan into a remote-controlled fan, you’ll need to purchase a separate receiver and remote kit.

How To Install a Universal Remote Receiver

Follow the steps below to install a universal ceiling fan remote receiver:

If the ceiling fan or remote control stops working, you’ll need to do some troubleshooting. Below are a few tips on how to do that:

First, check the batteries to ensure they’re in good working condition. If not, replace the batteries with a fresh set and try again.

Suggested: Does a ceiling fan with remote a wall switch?

Once you’ve checked the batteries and power switches, try reprogramming the remote control. Follow the instructions below:

If the batteries work, the power switches are on, and you’ve successfully programmed the remote to the receiver, but the ceiling fan still doesn’t work, then check the frequency settings. This requires some disassembly. The steps are as follows:

If none of these measures work, reach out to the receiver/remote kit manufacturer for more instructions.

Some newer ceiling fans have WiFi and Bluetooth capabilities. This allows the ceiling fans to connect to smart devices like Google Nest and Alexa. Some may even be controlled via a smartphone.

Hunter, a brand of ceiling fans, has smart ceiling fans that connect to smart home systems. Haiku is another brand that manufactures ceiling fans with WiFi capabilities.

With these technologically advanced ceiling fans, you can turn your phone into a universal remote. Simply download the app (recommended in the ceiling fan manufacturer’s instructions) and connect to the device via WiFi or Bluetooth.

From there, you can power your ceiling fan on and off. Some apps even allow users to schedule the fan based on household temperatures.

Home automation has changed the way that we live and will continue to do so in the future. With advancements in technology, we can now control home accessories, including ceiling fans, using remote controls, and even via our phones.

Technology has even allowed us to take older household accessories and transform them into smart home devices using special adapters. Using a universal remote with a ceiling fan requires some basic tech skills—but having a fan that you can power with a remote, a phone, or a smart home device is worth the time it takes to install.