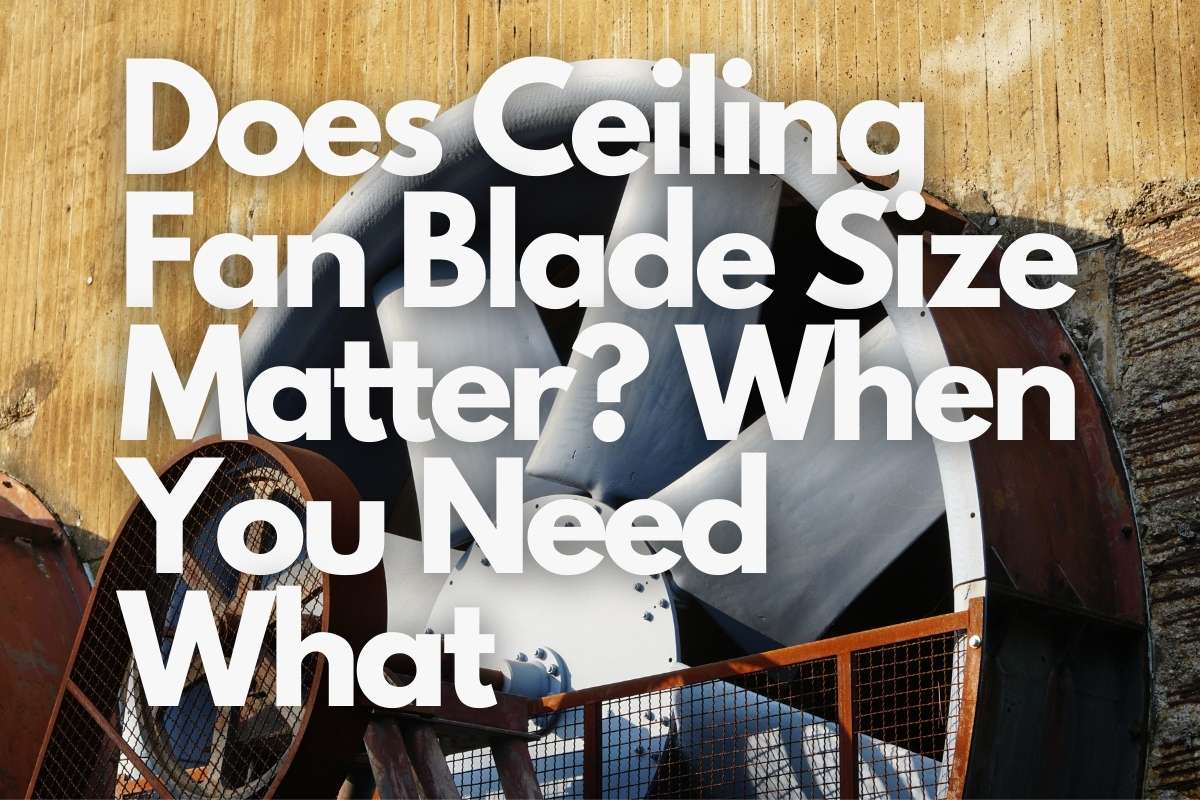 Size matters – especially when it comes to ceiling fan blades. So before you choose one, you have to consider the appropriate blade span for your room.

There are perfect blade measurements for room sizes up to 400 sq. ft. (37.16 sq. m) and more. This article will discuss the appropriate blade size for your room, and why that’s vital for the overall fan experience.

The blade span or sweep refers to the fan’s width – from one tip to another.

Expectedly, a longer blade helps create better airflow for bigger rooms. A shorter blade, on the other hand, is suitable for smaller areas. It provides direct airflow, after all.

Should you install a fan with a smaller blade size in a large room, it will end up working twice as hard. Even if you run it all day, it won’t cool your space as efficiently. In the end, you won’t get the airflow your room needs. Add to that, and you stand to pay a heftier electricity bill as well.

Say you’re not buying a new fan, which already has the blade size written on the box. You already have one, and you’re wondering if it’s good to use in another room.

If you can’t remember your fan’s measurements, you need not worry. You can measure it by yourself with a step ladder and measuring tape. (Just be sure to turn the fan off, first, if it’s in use!)

Suggested: Can you add longer blades to a ceiling fan?

How To Pick the Right Blade Size for Your Room

Keep in mind, if your room is L-shaped or otherwise oddly structured, break it into pieces and measure it as if you’re working on multiple rectangular rooms. Then simply add the measurements together to get the room’s total square footage.

Once you have your room size determined, all you need to do is refer to this chart to pick the right blade span:

If your room is bigger than 401 sq. ft. (37.25 sq. m), consider getting additional ceiling fans for the entire space.

While blade size matters a lot, there are other blade features that you need to take into account:

While span is essential, the pitch is just as crucial. It’s the angular measurement between the tilt and the horizontal plane.

As with the blade size, pitch dictates the airflow that circulates in the room. This is known as cubic feet per minute or CFM, which I’ll discuss in detail below.

Keep in mind that higher pitch does not always equate to better performance. Some manufacturers do this to compensate for their smaller motors.

As mentioned, this refers to the airflow delivered by the ceiling fan. It is measured by running the fan on max speed and dividing that number with the used watts.

Generally, the higher the CFM, the more air it moves. A higher CFM also means that it’s more efficient.

When it comes to blades, it’s not always the more, the merrier.

It doesn’t matter if you pick a two, three, or five-bladed fan. The fan’s performance depends on three things: the blade span (as discussed above) and the pitch.

Given the many options available, many can’t help but wonder: what’s the best type to choose? Any would work well, really. Most blades are made from either medium-density fiberboard or particleboard. Some are made with metal, which can help prevent tarnishing and scratches.

If you’re willing to spend some money, you can go for blades made with natural hardwood. In essence, it’s just a matter of picking the style that suits your room.

That said, if you want to install a ceiling fan on the patio or porch, you should pick a blade that’s damp or wet-rated. This design will help protect them from bubbling, warping, or peeling.

Suggested: Do you need an outdoor rated ceiling fan for a covered patio?

Other Important Features to Consider in a Ceiling Fan

Apart from picking the right blade size, pitch, or type, there are several other things you need to look at as well:

A good blade is useless without a motor. When it comes to ceiling fans, motors vary according to:

Can you replace a ceiling fan motor?

The housing is the part that carries the motor.

When choosing one, make sure to look at the material. Although heavy, a die-cast housing will lessen the fan’s vibrations. It will keep your fan stabler as well.

Other features that will improve fan operation and lifespan include:

Just like blade spans, ceiling heights vary as well. This makes it another critical consideration when picking a ceiling fan.

Generally speaking, ceiling fans should be placed in the center of the room. They also need to have an 8-inch (0.20 m) clearance between the blades and the ceilings. If not, they won’t be able to provide the airflow the area needs.

To get your room’s ceiling height, you will need to go up to your stepladder again. It will help to ask somebody to read the measurement. Hold one end and let your assistant read the number on your tape measure.

Depending on your ceiling height, you will have to choose from any of the following:

Suggested: Can you put a ceiling fan on a 7′ high ceiling?

If your ceiling height measures nine feet or more, then your best choice is a downrod fan.

It’s named so because of the downrods – the metal stick that connects the mounting hardware to the motor housing.

More than just stabilizing the fan, the downrods provide the recommended height for airflow – which is eight to nine feet (2.43-2.74 m).

When it comes to picking the right downrod length, remember to follow these recommendations:

Fans need to be installed at least seven feet from the ground. Go any lower, and a tall person may end up bumping into your fan.

To prevent this – among many other catastrophes – you need to choose the right type for your low-ceiling room:

Because these fans are nearer the ceiling, they will not generate as much airflow compared to traditional models. That said, they still prove helpful in smaller rooms, such as offices and guest bedrooms.

Suggested: What are hugger ceiling fans?

Also known as the sloped mount fan, it’s best for angled or vaulted ceilings. Ideally, it should be installed in a room with a ceiling angle of 34 to 56 degrees.

Note: You may use the traditional fan for ceilings with a 28-degree angle or less.

If you want to install a ceiling fan with lights, you will need to measure the entire fan itself. You must take the lights’ measurement into account before you install the fan.

It’s just like the low ceiling dilemma – a tall person is more likely to hit a fan with hanging lights.

Tips on Installing a Ceiling Fan

Even if you’ve picked the right blade span, it wouldn’t matter if the fan is installed haphazardly. As such, you need to make sure to follow these installation tips:

You’d want your fan to run smoothly, so you need to get rid of anything that might impede the blade from running. That means removing wires, lights, or any other hanging fixtures within the blade’s reach. This is crucial as forgetting to do so will lead to damaged blades – even an electrical fiasco!

A ceiling fan can weigh as much as 50 pounds (22.67 kg). Since it’s pretty heavy, you need to install it in an area that could support it well. The best location thus far is the ceiling joist.

It will help to use a 1.5-inch (0.03 m) pancake box, as this will provide unobtrusive support for your fan. If installing on a joist is not possible, make sure to follow the Energy Star recommendations. One is placing a hollow two-by-four block on the ceiling. It can hold the metal box that supports the ceiling fan better.

Suggested: How to find out if an electrical box can support a ceiling fan?

Use the Right Electrical Box

If you need to replace the ceiling fixtures, you may also have to replace your old box. You will find this on top of the ceiling.

Should you need to make a replacement, use a UL box marked ‘for use with ceiling fans.’

While a ceiling fan is usually balanced, it might appear shaky during use. To prevent this, you need to make sure that the connections are aligned and fastened. You can check the alignment by placing a yardstick along the vertical edge. If one blade is out of balance, gently put it back into place.

If all the blades appear balanced, it’s time to use the manufacturer’s balancing clips or blade weights. They should help you pinpoint the reason behind the swaying.

Suggested: Can a ceiling fan fall?

As you see, ceiling fan blade size indeed matters. The right size will help generate the air your room needs.