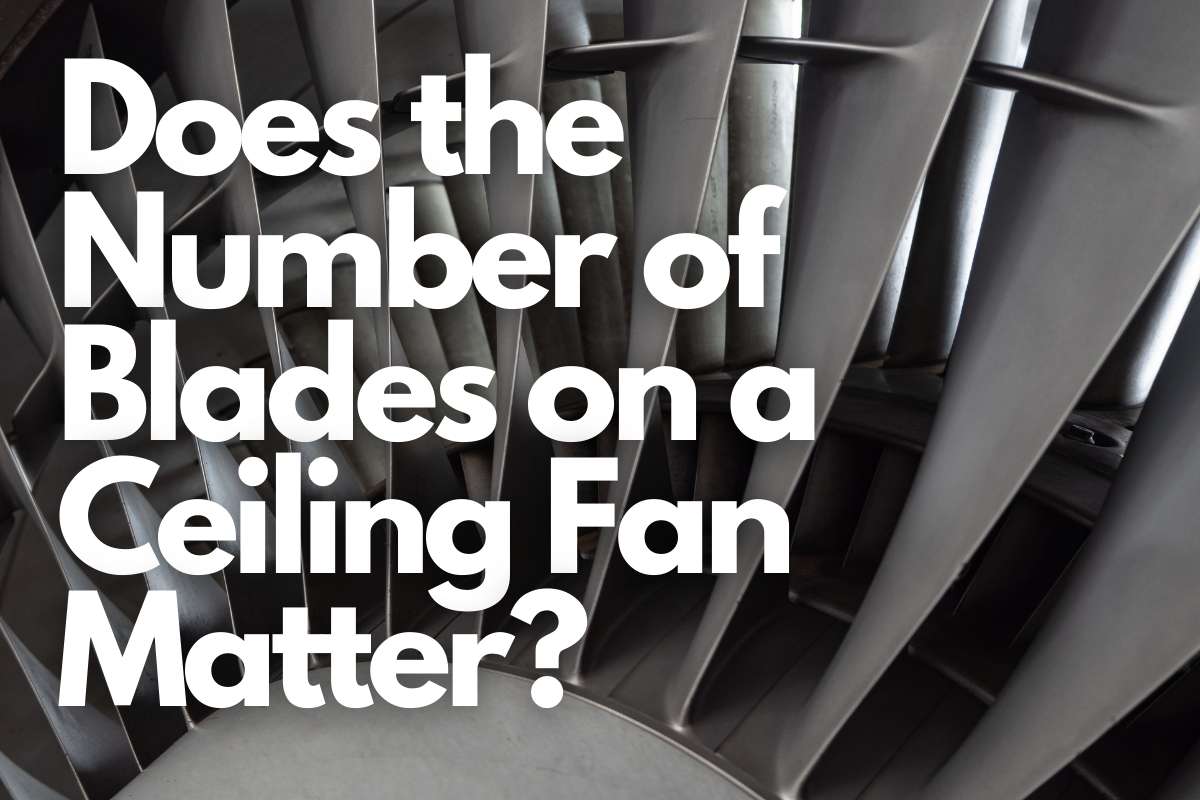 Ceiling fans are an effective way to circulate air in the home and keep a room cool, and in fact, about 15 to 19 million ceiling fans are sold every year. But how do you know which fan to buy? Many ceiling fans come with a different number of blades, but does it make a difference?

In this article, we’ll examine the differences in noise, style, and airflow to determine why ceiling fan blades matter. Let’s take a deeper look at how the number of blades affects a ceiling fan.

Why Does the Number of Blades on a Ceiling Fan Matter?

Not every fan with fewer blades is going to make a lot of noise. It depends on the age of the fan as well as how well it is constructed. Many ceiling fans now come with a balancing kit that allows you to add weights to the fan.

If your fan doesn’t come with this, then it can be bought separately.

Imbalanced fans can move around a lot more at the base, which can cause noises. This movement can also cause loose screws, which could even result in your fan coming out of the ceiling. If your fan is making a lot of noise, check to ensure it is securely attached to the ceiling to avoid any accidents.

If it is securely attached but still making noise, then consider a balancing kit to help minimize the sounds.

Air Circulation Can Change Based on the Number of Blades

The number of blades can affect the amount of air that circulates when your fan is running, and having fewer blades can help the air circulate more effectively because there is no pull or drag of the motor.

Ceiling fans share the same size motor no matter the number of blades they have.

Without the motor slowing down, the fan can rotate at full speed. So, fewer blades mean that there will be more air circulating through the room because the fan motor won’t experience drag.

The air circulation is determined by the speed of the blades rather than the amount. The shape of the blades can also make a difference in the amount of air that you feel, but the most airflow will come from fans with fewer blades.

Suggested: How much CFM does a ceiling fan need for my space?

The Fan Motor Needs To Work Harder With More Blades

Part of the reason why fewer blades produce more air circulation is that the motor does not have to work as hard to spin three blades versus five or six. The motor has to work harder because the blades add weight.

Since the motor is the same size for each fan, no matter how many blades there are, it has to work more.

A fan with the same size motor will be able to run a three-blade fan faster and more efficiently than a five-blade fan. This motor is what changes the airflow as the number of blades changes. So, if you want more air circulating the room, then fewer blades may be a better option for you.

Three-blade fans tend to use less energy to work because it takes less effort from the motor to move it.

A three-blade fan will circulate air better in a room than one with more blades because the motor will not have to work as hard to move it. The ability to slow the fan down and still have it work effectively will save you money when it comes to energy costs.

Not only will you be able to save on energy costs with fewer blades, but you will also have a lower air conditioning bill. Fewer blades will help you better move the cool air around the room, which can help with your energy bills as it will allow cool air to circulate better around the room.

How Much Can I Expect To Pay for a Ceiling Fan?

You can expect to pay as little as $20 or as much as $2,000 for a ceiling fan, depending on the quality and brand. Quality and brand aren’t the only things that can affect how much you pay for your fan. In fact, many different factors affect the price of your fan.

What To Expect for a $100 or Less Ceiling Fan

Fans below $100 are very basic, as they tend to come with one or two-speed settings and are controlled by a pull switch or light switch. These fans typically won’t come with remote control, and if there is a light fixture included in the fan, then you can expect it to be very basic and simple.

With this price range, there won’t be many variations on styles.

The blades will most likely be very plain and relatively flat. You can also expect monotone colors without intricate designs. There is nothing wrong with buying a fan in this price category, but you may not be getting the most out of the fan in this price range.

Suggested: Are cheap ceiling fans worth the money?

More Average Prices From $200–$600 Give You More Features

This category is going to give you much better options for getting the most out of your fan. They will have more options for choosing speeds and give you remote control to determine speed and light options.

This price range will give you a lot more options for different blades.

These blades can help move air around more efficiently and save you money by using less energy. With this price range, you can also find more intricate and beautiful light fixtures to make your fan more elegant.

The number of blades won’t make much of a difference with the price as you are paying for the fan quality, lighting, and design options more than the number of blades. So, buying in this price range gives you the option to choose however many blades you want without worrying about that changing the price.

Suggested: What time of year do ceiling fans go on sale?

Any fan varying from $700-$2,000 is a high-end fan, and that can be a great option if you have the money to spend. They aren’t going to be much different in quality from the average-priced fans.

The price change comes from the material the fan is made of and more intricate differences like lighting.

Most of these high-end fans come with similar features that you can get with fans that cost less.

Generally, the more expensive fans will have the same energy costs as average fans, with some exceptions for materials used and weight. So, high-end fans are a great choice, but there is nothing much you will miss out on when sticking with a lower price range.

Different styles of blades will determine the efficiency of the ceiling fan. Longer blades are best for bigger rooms, whereas smaller blades can more effectively keep smaller rooms cool. The material and shape of your fan blades can also determine how effectively it cools your room.

Longer fan blades are more effective for cooling down larger rooms because they circulate the air more widely. Rather than pushing the air down, longer blades will help push the air around the room, covering more space.

Smaller blades don’t allow the air to be pushed around the room as much. Rather than swirling the air around, small blades push the air down, allowing it to more effectively cool smaller spaces like bedrooms.

Longer blades are more effective for cooling large areas like your living room or even outdoor spaces. Keep smaller blades for smaller areas like a bedroom, bathroom, or even smaller gathering areas.

Suggested: Does a ceiling fan cool down the room?

What Your Blade Is Made of Can Determine Effectiveness

Suggested: What are the different types of ceiling fans?

Let’s talk more about these materials and what to look for when buying a new fan.

Timber ceiling fan blades are the most common material type, but they are not the most effective for air circulation. This material is the quietest, but the loss of ineffectiveness has caused many people to seek out other options.

In fact, some manufacturers have begun to combine timber blades with plastic to allow it to be more effective without sacrificing sound.

Metal fan blades are popular for those who want the most possible airflow. Since they are so heavy, metal blades will cut right through the air providing great airflow.

The reason this is not the most popular choice is that they are not very cost-effective. Metal may cut through the air, but it is also very heavy. This added weight will cause the fan motor to struggle to run the fan at times. This means that metal blades may cost you more when it comes to energy use.

Also, be careful using metal blades as they can easily rust if too much moisture is introduced.

Plastic blades are growing in popularity as they are cost-effective, and can be easily molded into any shape you want, giving you more options for different blade designs.

Also, plastic blades are very lightweight, which means that your fan motor will not struggle to move them. This will save you on energy costs and allow you to circulate more air with these blades.

Lighter fan blades can also help your fan motor last longer as the motor won’t struggle as much to work.

The fan you choose should have a proper blade pitch which allows it to circulate air without creating too intense of an airflow. The proper pitch allows air to move around the room, creating a light breeze rather than a wind tunnel for those standing underneath.

Then, there are ergonomic shapes to consider when finding the right fan.

These shapes can vary greatly depending on the brand and design of the fan. But the more ergonomically correct the blades are, the more likely they are to produce stronger airflow.

The shape of the blade will not affect the airflow much without there being a proper blade pitch, which is what really counts when circulating air. The different designs can help push air along as well, but it still won’t be as effective.

Also, make sure you are focusing on the material that the blade is made of. Even though metal blades may have an innovative shape, they still will take more energy to move, causing your motor to give out more quickly.

So, focus on the material, length, and width of the fan blade rather than the shape. Airflow will be determined more from those factors than anything having to do with cool or unique shapes.

The number of blades on a ceiling fan can make a big difference with what to expect. Fans with fewer blades are more energy-efficient and will push around air more effectively.

More blades on your fan are better for cooling wider areas like living rooms or even outdoor areas.

When it comes to choosing the right fan, remember that mid-range fans are going to give you the most versatile options. Styles can also affect the air quality, but the amount and pitch of your blades will make a bigger difference in air circulation.