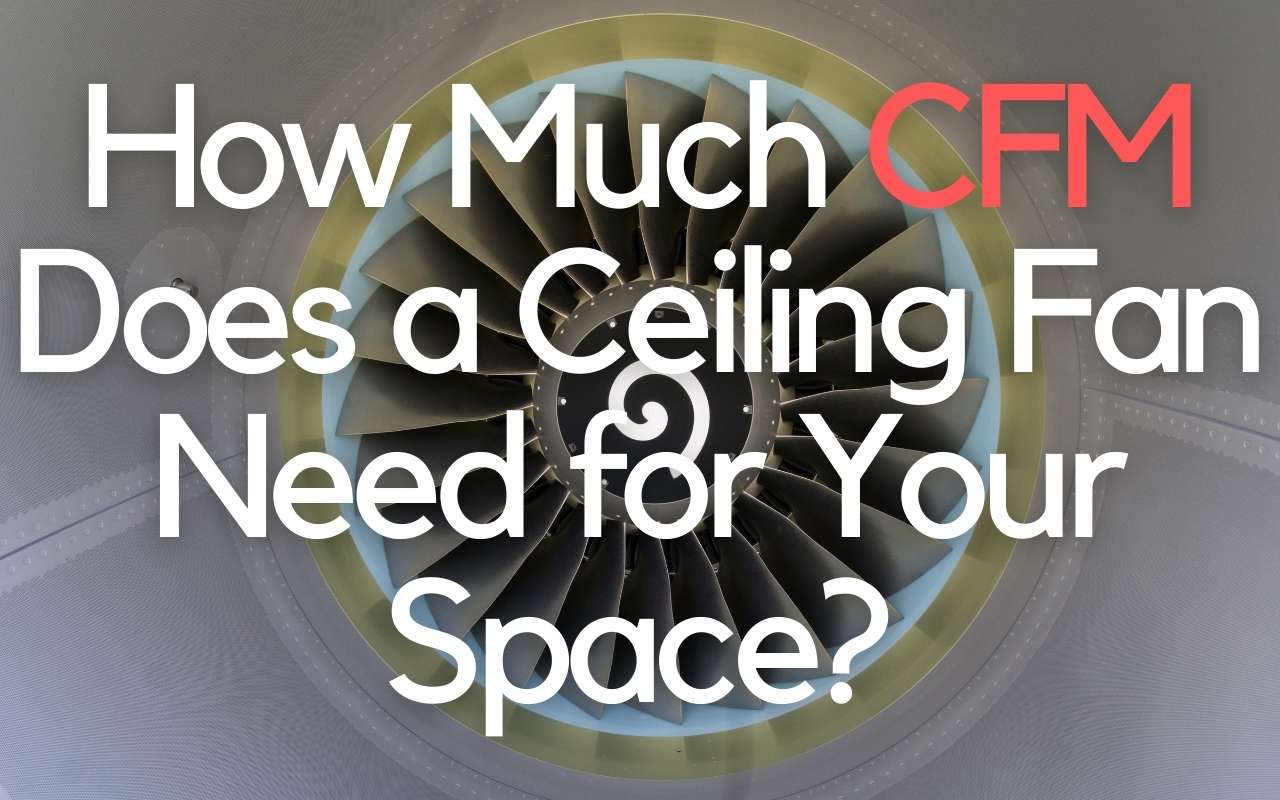 When shopping for a ceiling fan you might wonder how much CFM a fan should be able to push for your space. Each fan has a different CFM due to differences in the size and shape of the blades, motor power, and more. So let’s see what’s best for you.

This chart shows how much CFM a ceiling fan needs for the space (in square footage):

Read on to learn how to determine the right CFM for your space based on the room’s square footage. This article will help you choose the right ceiling fan so that you effectively cool your space without overusing energy.

Determining How Much CFM a Fan Needs for Your Space

Most ceiling fans have a CFM of about 4,000, but you can find ones that range from 2,000 to 10,000 CFM. In general, you want the CFM to fit the space as well as you can; more isn’t always better. A higher CFM means higher energy usage, and you want to be efficient with energy while moving enough air to keep your room cool and dry.

Keep in mind that those measurements assume the height of the room to be about 8 feet (2.44 m) tall. If your room is much taller or shorter than that, the needed CFM will be slightly different than what’s noted.

Suggested: What types of ceiling fans are there?

Calculating the Square Footage of a Room

Before you can determine the appropriate CFM for your room, you need to figure out what the room’s square footage is. You can do this by measuring the length of the area by its width. If you know the size of the space in square yards, you can also multiply that by three because there are 3 feet (0.91 m) in each yard.

The amount of CFM your fan needs for the space depends on the size of your space. Bigger rooms need more CFM because they contain more air.

CFM is used to compute a fan’s effectiveness by measuring how much cubic feet of air is moved per minute. Measurements of CFM assume that the fan is rotating at the highest speed possible. It’s influenced largely by the size and shape of the fan and the power of the motor.

Airflow efficiency is calculated by dividing the CFM by the watts used to run the fan. Ideally, your fan will have not only an appropriate CFM but also a low wattage of energy use relative to the amount of air moved.

To find a fan with high airflow efficiency, look for a powerful motor and slightly tilted fan blades with a pitch of about 13 inches (33.02 cm).

CFM is influenced by the fan’s rotations per minute rate, the size of the fan blades, the blade tilt, the quality of the motor, and the height from the ceiling.

A fan with a high RPM will generally have a higher CFM because it can move more air more quickly.

Ideally, your fan will have at least six different speed settings, ranging from low to high. This allows you to maximize the efficiency of your fan by choosing an airflow that matches your needs on any given day.

A high RPM can only do so much on its own, however. It needs to be paired with blades with an appropriate pitch and a motor with enough power to circulate the air properly.

When a fan has bigger blades, it’ll push more air with every rotation, increasing the overall CFM. Usually, fans have a blade size of 40-65 inches (101.6-165.1 cm), although you can find even bigger blades if you need them to fit a larger space. Just remember that bigger fan blades will take more energy to turn, so you’ll want the blades to fit the space, not be the biggest possible.

Blades vary in size in terms of length and width, so make sure that you take both into account when choosing your fan. You also need to ensure that the blades work well with the motor, as a mismatch can cause a major malfunction.

The more a ceiling fan blade is tilted, the more it’ll push air as it turns, and the more energy it will take from the motor to spin around. Usually, fan blades have a tilt of about 13 inches (33.02 cm), although they can be as much as 14 to 15 degrees. This measurement is also sometimes called the pitch. Like blade size, blade tilt contributes to the energy used when spinning the fan, so more isn’t always better.

With less tilt, flatter blades don’t put as much strain on the motor when they spin. Blades with more tilt require a stronger motor to push them along and push more air as they spin. If your fan tends to wobble, it could be because the blades don’t have enough of a steep pitch, overworking the motor without pushing air very forcefully.

If your fan breaks down or gets worn out quickly, it could be because the blades are too steep, putting too much strain on a motor that’s not strong enough to handle it.

The quality of the motor is perhaps the most important factor in determining the CFM of a fan because it influences the amount of energy being put into transforming airflow. A higher-quality motor will move air more quickly, improving the rate at which air is refreshed in the room and increasing the CFM.

Ceiling fans with powerful motors tend to be more expensive, so be aware that these kinds of fans take some investment.

Suggested: Can a ceiling fan motor be replaced?

Height From the Ceiling

In general, a ceiling fan needs to be at least 10-12 inches (25.4-30.48 cm) from the ceiling to properly circulate the air in a room. However, some fans, known as hugger fans, are designed to work flush against the ceiling.

If you have vaulted ceilings, you may need a larger distance between the ceiling fan and the ceiling. In this case, just make sure that the fan is about 8-9 feet (2.44-2.74 m) up from the floor.

The following fans (available on Amazon.com) are the best choices for small rooms like bedrooms and some kitchens:

The Prominence Home Alvina Low-Profile Ceiling Fan is ideal for rooms of about 200 square feet (18.58 sq. m) and smaller, with a CFM of about 2,000. It mounts directly on the ceiling rather than hanging.

This fan is very quiet and is reversible so that you can use it in all seasons. It’s easy to install, too, which means that you’ll be able to do it yourself without worrying about it going badly.

The Prominence Home Hero Hugger works well for a room of about 200 square feet (18.58 sq. m). It’s very quiet and doesn’t wobble even at the highest speeds.

This fan has shorter than average blades at just 28 inches (71.12 cm), but it’s highly efficient and works very well for a fan of its size. It mounts right against the ceiling and is made from steel with a glossy finish.

This fan is a good choice for small rooms that already have a light installed because it’s powerful for its size but doesn’t come with a light. It sits flush with the ceiling, making it a good choice for rooms with a lower ceiling, and it’s quiet for minimal disruptiveness.

This 30-inch (76.2-cm) ceiling fan has a retro design and a small CFM, ideal for a stylish bathroom or small bedroom. This fan hangs from the ceiling rather than sitting flush, so it might not be the best choice for a room with an especially low-hanging ceiling.

You can use this fan outside as well as inside, and it can handle wet environments.

The following fans (available on Amazon.com) are the best ones to use in medium-sized rooms like living rooms or some bedrooms:

This fan has a semi-flush mount, with a small hang from the ceiling. The motor has three speeds, is quiet, and can be reversed for warming or cooling.

This Westinghouse Lighting ceiling fan can cool a room up to 400 square feet (37.16 sq. m), and it performs well even at low and medium speeds. It has 52-inch (132.08 cm) fan blades for extra power, and the high-quality motor can provide significant airflow while remaining quiet and efficient. You can also reverse this fan for use in fall and winter.

These fans (available on Amazon.com) have a high CFM and are well-suited to use in large rooms:

The Honeywell Xerxes Ceiling Fan fan is very large at a diameter of 62 inches (157.48-cm). It has eight blades that hang 14 inches (35.56 cm) from the ceiling, ideal for large rooms with a high ceiling.

This fan also has a very powerful motor with three speeds and a reverse airflow feature that makes the fan suitable for use during the winter or the summer months.

The Hunter Deluxe Indoor Ceiling Fan that comes with a 5-blade and a single light  is very quiet and balanced, with minimal wobbling even at its highest speeds. It has larger than average blades at a diameter of 52 inches (132.08 cm), making for greater airflow and a higher CFM. It mounts flush with the ceiling, which means it can work in rooms with a taller or shorter ceiling.

This Westinghouse Lighting ceiling fan has a CFM of 4,833, ideal for large-sized rooms. It has a high-quality, efficient motor that delivers high power without draining too much energy. And, this fan comes with a 15-year warranty for the motor, as well as a two-year warranty for other parts.

The CFM that you need for your ceiling fan depends on the size of the room you’re looking to cool. Bigger rooms will require more CFM, and smaller rooms require less. CFM is influenced by the size of the fan and fan blades, the speed the fan rotates, and the degree that the blades tilt or pitch.

Keep in mind, CFM is just one factor that you need to consider when choosing a ceiling fan for your room. Be sure you’re choosing the right type of fan that best fits the space you have.