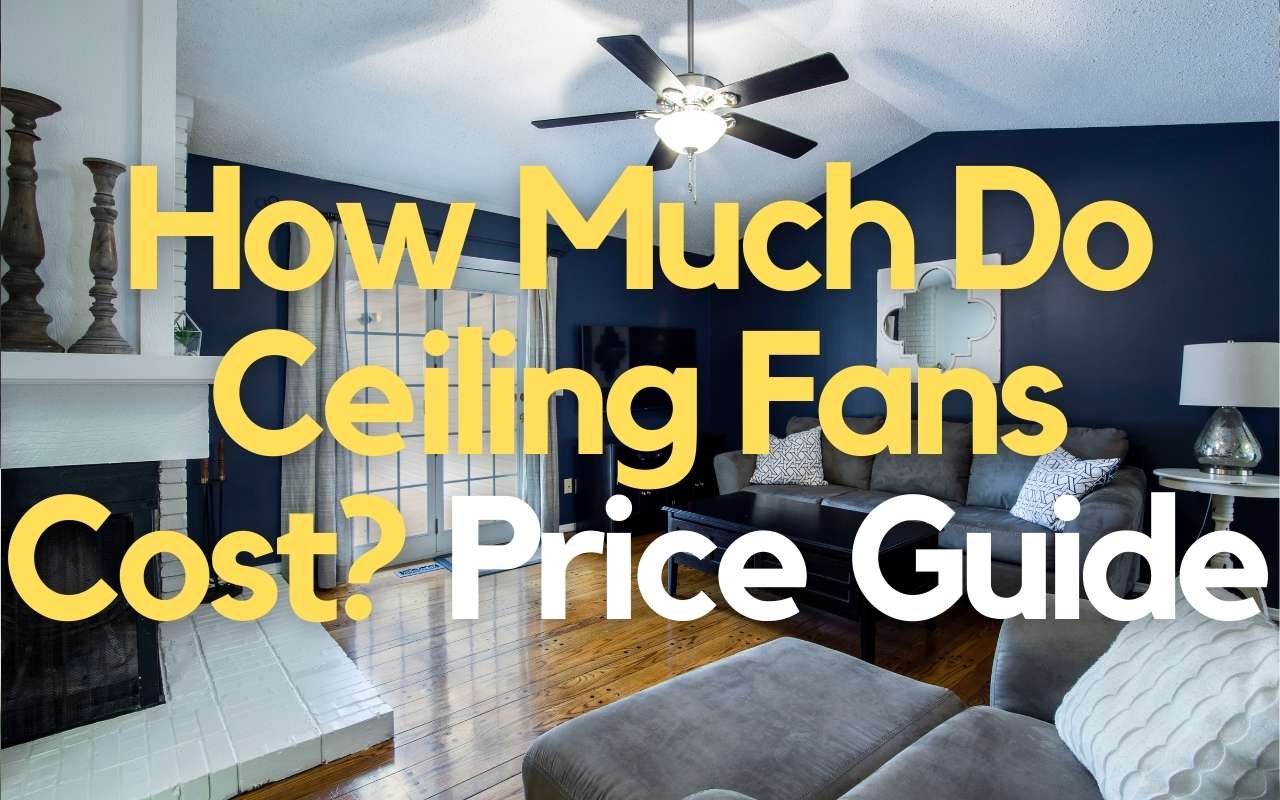 Ceiling fans are a popular home appliance, that make life more comfortable. If you’re thinking of finally installing one in your home, you may be wondering how much they cost. Here’s what you want to know.

On average, a ceiling fan costs $125 without installation or $250 with installation. Some ceiling fans cost as little as $30 per unit, while fancier ones cost several thousand dollars per unit. More expensive models have better designs, motors, last longer and come with better customer service.

Read on to learn more about how much it costs to install ceiling fans for your home.

How Much Do Indoor Ceiling Fans Cost?

On average, indoor ceiling fans cost around $125 per unit. You can expect to pay an average of $250 for the fan plus installation. Cheaper ceiling fan options are available, too, for as little as $30. Expensive indoor ceiling fans, however, can cost several hundred or thousands of dollars per unit.

The actual cost of the fan depends on:

For this article, we’ll only look at the cost of the fan and not worry about their installation costs.

How Many Indoor Ceiling Fan Types Are There?

There are five common types of indoor ceiling fans, including standard, low-profile, and rotational. These ceiling fans are made of different materials and are available in various sizes.

Suggested: What are the types of ceiling fans

Let’s discuss each of these types below.

Standard fans are the most common type of residential ceiling fans. They typically come with five blades, a pull chain or wall switch control, and basic light fixtures. If you want to spruce it up, you have the option of adding a remote control and more high-end light fixtures.

Most standard ceiling fans cost anywhere from $30 to $250.

Hanging propeller ceiling fans tend to be a little bit more pricey than standard or low profile. They’re designed to be used in a larger space with higher ceilings. This allows them to come with more added features such as seven or nine fan blades, extended down rods, and larger lighting ornaments.

The length of down rods on hanging propeller ceiling fans can be anywhere from six inches (15 cm) in length to several feet. They’re also available in multiple colors and materials, which makes for a wider price differential.

Because they’re suspended at an angle and not straight up and down, directional fans are often smaller than standard ceiling fans but are more expensive. Directional ceiling fans will cost in the neighborhood of $150 to $1,000, depending on size and brand.

Rotational ceiling fans are one of the more unique types of ceiling fans. They feature multiple fan heads, each with its own motor that can point in different directions. This unique feature allows air to be blown in multiple directions simultaneously, rather than just the traditional downward direction.

Each of the fan heads will be smaller than a standard ceiling fan, but the fact that there are three heads will make them quite a bit more pricey. You’re getting three ceiling fans in one, meaning rotational ceiling fans can be costly, with prices ranging from $250 to $2,000.

How Much Do Outdoor Ceiling Fans Cost?

Outdoor ceiling fans can cost between $60 per unit and up to $5,000 per unit. These fans are specifically designed for outdoor use, so they come in varieties like damp-rated and wet-rated.

Let’s explore these outdoor ceiling fans to help you decide which one is best suited for your needs.

A damp-rated ceiling fan is capable of handling small amounts of moisture but not direct rainwater or splashing. These fans are commonly found in four-season rooms, covered patios, or even indoors in bathrooms or kitchens. Anywhere prone to dampness and moisture in the air will require a damp-rated ceiling fan.

Suggested: Do I need an outdoor ceiling fan for a covered patio?

Because of the size and scope of many damp-rated ceiling fans, these could prove quite tricky to install yourself and will most likely require the assistance of a professional. Either an electrician or a handyman should be able to handle the project depending on the difficulty.

Wet-rated ceiling fans are the most durable type of ceiling fan. These fans can withstand direct water, snow, or moisture of any kind, making them perfect for exposed pergolas or gazebos, uncovered porches or patios, and any other areas with possible wetness.

Suggested: Can indoor ceiling fans be used outside?

Ceiling fans at their most basic will certainly not break the bank when it comes to cost, but certain perks will run up the cost fast:

Ceiling fans are nice touches to any room inside or outside your house that can add comfort and value to your home. Choosing the right fan for the desired application is crucial to getting the most out of your ceiling fan.

Whether you decide to install the ceiling fan yourself or have an electrician or handyman do it is up to you. You’ll undoubtedly save some money doing the work yourself, however, as long as you have the right tools and knowledge for the job.