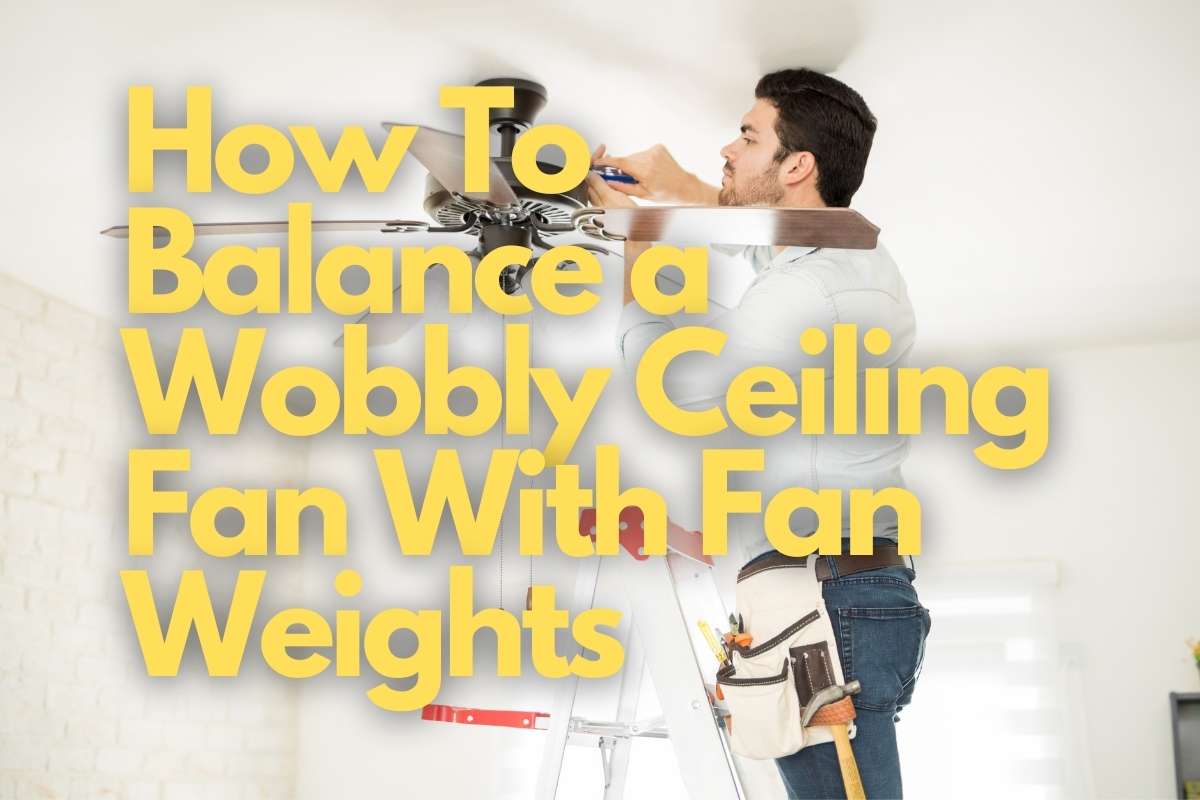 A wobbly ceiling fan can be a bit scary but often it’s actually not too difficult to fix. Here’s what you need to know.

The main reason a ceiling fan is wobbly is because of a weight imbalance. This imbalance can be fixed by properly using a fan balancing kit. However, before using balancing weights, the fan should be cleaned, inspected for damage and the installation inspected to rule out any other causes.

Below you can find out exactly what you can do to stop your fan from wobbling.

You’ll need a fan balancing kit. you can find one here for cheap on Amazon

Why Is Your Ceiling Fan Wobbly?

Before we get to how to fix a wobbly ceiling fan we should understand why it wobbles in the first place. If you don’t know why something is happening, it’s hard to fix it.

There are a few causes why a ceiling fan can wobble but the main reason is an imbalance. If one side has a slightly different weight distribution then the other side of a ceiling fan, it will wobble because the centripetal force pulls the side with the higher weight off axis.

Just think about the wheels on your car. When you get new tires, the whole wheel has to be balanced. That’s because most tires have some imbalance in them so it’s necessary to find the heaviest spot of the tire and add some weight to the opposite side to balance it. If you don’t do this you’ll find the whole car is vibrating at certain speeds.

And it’s not about absolute weight alone. The weight distribution also matters. Because a weight at the tip of a blade costs more energy to accelerate than a weight closer to the middle, this causes an imbalance. The torsional forces are now uneven from one side to the other even though the absolute weight is the same.

Besides the imbalance, there are some installation factors that can really amplify the wobbling. If the wobbling forces aren’t properly dissipated, it can become a self-amplifying problem.

A little wobble is usually nothing to be concerned about. A good ceiling fan properly installed should be stable but if it has wobbled for a long time, don’t worry about it too much. However, if it just started and especially if the wobble gets worse, it’s time to stop using the fan and find the problem before something bad happens.

Let’s go over the different things you should check in the correct order.

How To Balance a Wobbly Ceiling Fan?

So the main cause of a wobbly ceiling fan is an imbalance. There are different causes for this and some things that make an imbalance worse. Here is what you should check and how it can help.

The first order of business is cleaning your fan. Ceiling fans tend to collect quite a bit of dirt on the blades. While they get dirty most of the dust accumulates equally on the blades which is still bad but won’t cause a big imbalance. However, you only need a difference of a few grams to get a wobble.

Suggested: Can a ceiling fan warm a room in the winter?

Sometimes bugs can get splattered on the blades and this could be enough if it happens a few times. Besides the imbalance it’s a good idea to clean your ceiling fan anyways. Usually once a year is enough unless you live in a very dusty environment. Dirty ceiling fans can aggravate allergies and they just look nasty.

Cleaning your ceiling fan isn’t too difficult. You want to clean the blades but if it’s been up for a long time, removing the motor cowling and cleaning under there is also a good idea.

Use a stool or stable ladder so you can reach the fan blades. The best way to clean a ceiling fan is by using an old pillowcase. If you don’t care about dust and dirt falling down, you don’t have to use one but it’s a neat trick since putting a pillowcase around the blades will catch everything and prevent the dust from just getting into other places in the room.

It’s a good idea to use a damp pillowcase that’s wetted with a water and mild detergent mix. The wet cloth will help catch all the dust and the detergent will clean better and easier. Don’t pull too hard on the ceiling fan to clean it. Just rub the blades through the pillowcase in a way that it doesn’t put stress on the mounting hardware.

If the dust is caked on too stubbornly to take off this way, you’ll have to do some soaking. Sprayable kitchen cleaner is very effective but can be a bit too aggressive for some materials. Just putting a water/detergent mixture in a spray bottle is fine in most cases. Spray it on and wait a few minutes before using the pillowcase and it’ll take care of almost everything. However, if you spray liquid on the blades, you take the risk of some dusty water dripping down so you’ll want to put something on the floor underneath the fan to catch anything that falls down.

Let any leftover liquid air dry after cleaning and then turn on the fan to see if it’s more stable.

While you’re up there, check if there is any damage to the fan blades Maybe they hit something you don’t know about which could have created a little deformation.

Also, over time some fan blades can warp. It’s very unlikely that all the different blades are warped in the same way. When one blade is warped in a different way than another, the weight distribution can be upset which means an imbalanced fan that wobbles. Warped blades will also push against the air differently so if one blade has more thrust than another, that also causes a wobble.

Also give it a spin. Check if the blades rotate smoothly. If it doesn’t spin freely a whole revolution, there might be something wrong with the motor which causes a problem. This isn’t very common but possible. In most cases this means replacing a motor or buying a new fan.

Suggested: 8 Reasons why your ceiling fan is not working

If your fan is wobbling significantly, it’s a good idea to check if it is (still) installed properly. If it has been installed for a while and it started wobbling out of nothing, this is certainly a concern. The wobbling can make anything that got loose over time much looser very quickly as well.

If you don’t feel sure what to look for, contacting a professional is a good idea. That way you’ll have more piece of mind and a pro will be able to detect and fix any other problems as well. That way everything is taken care of in one go and you can feel safe turning on your ceiling fan again.

If everything seems to be in order, and is still wobbly after cleaning and checking, there is one thing you can do: Fan weights. Fan weights work in the same way as balancing tires. You find the heavy side and put a little weight on the opposite side to balance it out. The same principle works for pretty much anything you want to balance and ceiling fans are not an exception.

However, make sure this is not the first solution you use because the wobble could actually be the result of an underlying problem like dirt, damage or installation problems. Make sure to clean the fan blades and check the installation before attaching any more weight.

A set of fan weights is a lot cheaper than a new fan and probably cheaper than the installation fee of a new fan. So if everything seems to be in order, a set of fan weights can be a great cheap fix. Just attaching weights to the fan blades at random might work but the chances you’ll get it right like that are pretty slim. There is actually a way to figure out where you should put the fan weights but it will take some effort and 20 minutes of your time.

In a balancing kit you’ll find a few things. The looks might slightly differ from kit to kit but in general, you’ll get a clip and some weights. Usually the little weights have a strip of double sided tape on them so they are easy to stick to the blades.

You can find a fan balancing kit here on Amazon.

The clips are used to find which spot you should put the weights in. The weights are then stuck in that position on the top of the blades so you don’t see them.

Here are the steps to balancing a ceiling fan with weights:

link to Can You Have a Ceiling Fan In a Bathroom?

Want to add a fan to your bathroom but aren’t sure if this is possible? Here’s what you want to know.  Using a ceiling fan in a bathroom is perfectly fine as long as the fan is small...

Does a ceiling fan with short blades seem like a good solution for you? Let’s take a look at the pros and cons of small bladed ceiling fans compared to regular ones and if it’s right for you....