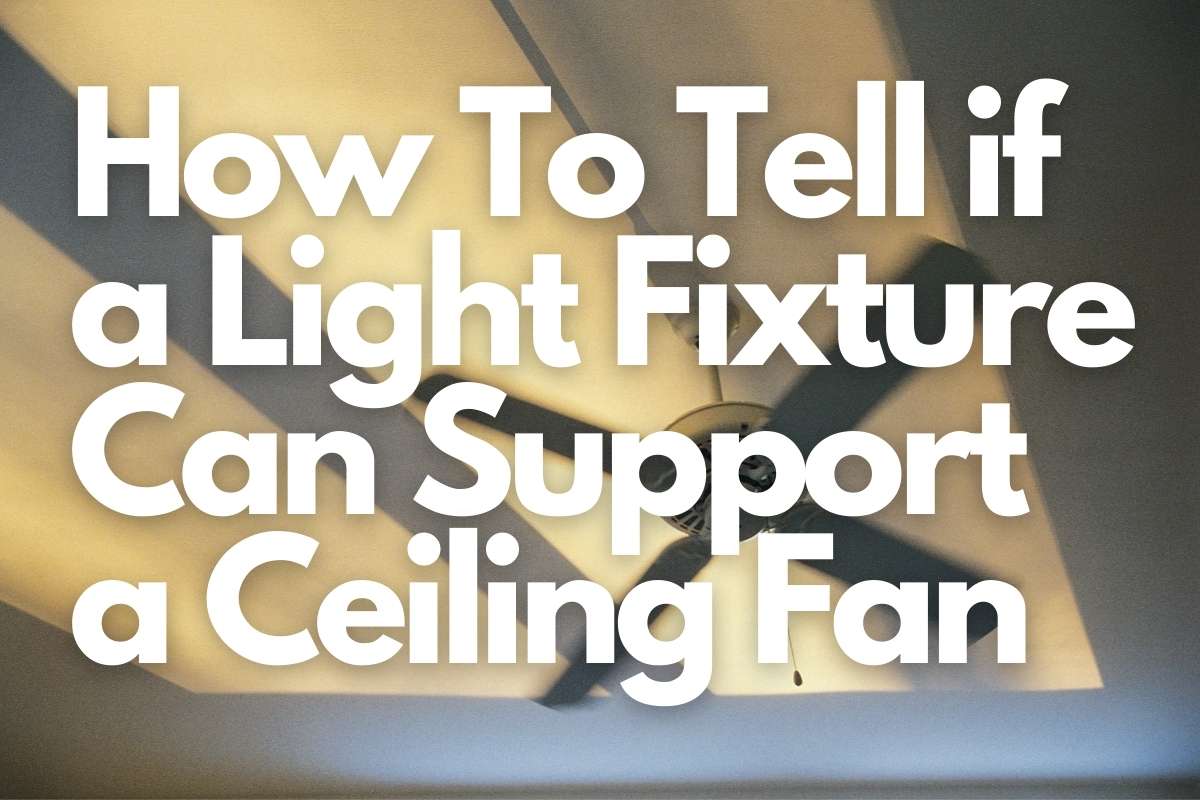 Not all homes have ceiling fans, and older homes, especially, don’t always have them. If you happen to own a home without ceiling fans but would like to add them, there’s a good trick that can save you some time and money. And if the room where you want to add a fan has an already installed light fixture, there’s a chance that you can replace the light with a ceiling fan.

Here’s how you can tell if a light fixture can support a ceiling fan:

1. Turn Off the Light’s Power Source

First and foremost, you’ll want to ensure that power is off the light before touching any wires or fixtures. When doing so, always make sure your hands are dry. Once you’re sure that electricity is cut off to the light, remove the fixture and visually inspect the electrical box.

On the inside of the electrical box, you should find information that specifies how much weight the box can support. Depending on how new the electrical box is, it should also precisely specify that it can hold the weight of a conventional ceiling fan.

If the electrical box does indeed specify that it can support a ceiling fan, do a more thorough inspection to determine the box’s integrity. Depending on how old the house is, the electrical box may be decrepit and no longer capable of operating at full strength.

If you have any doubts about the integrity of the electrical box, it would be advisable to install a new one.

2. Determine the Fan’s Weight by Inspecting the Packaging

After discovering the total weight that the electrical box can support, check to see what the ceiling fan’s total weight is. There are many different types of ceiling fans, and the exact weight isn’t universal.

The electrical box says that it’s approved for ceiling fans but doesn’t give you the green light to install any type of fan.

A typical residential ceiling fan will weigh anywhere between 15 and 50 pounds (6.8 – 22.6 kg). Standard electrical boxes, even the ones that say they support the weight of ceiling fans, can handle up to 50 pounds (22.6 kg).

Depending on the type of electrical box, this could be slightly more or less, but only the writing on the electrical box will tell you that information. The number one rule to wise decisions in electrical work is to read and trust your instructions.

If the electrical box is ceiling fan approved, but the fan you wish to install weighs over 50 pounds (22.6 kg), it would be wise to consult a professional before installation.

If they inspect the electrical box and give you the green light, you can rest assured that the box will support the weight of your ceiling fan.

3. Check Around the Electrical Box To See How It’s Supported

After determining the support capabilities of your electrical box, do an inspection to determine how the electrical box is being supported. This may require you to get dirty and crawl around in the attic if there’s one above the room of the old light fixture.

Often, light fixtures are nailed to a joist above the ceiling. While this is fine for most light fixtures, it’s not always strong enough to support the weight of a ceiling fan running at full speed.

The fan will spin and rock slightly while in motion, which could cause the nails to work themselves loose over time.

Another method of supporting light fixtures is to nail a piece of wood between two studs and screw the electrical box to that piece of wood.

This is a much sturdier way of securing an electrical box and will significantly increase its integrity. An electrical box attached in this manner and capable of supporting a ceiling fan could be a lifesaver.

You’ll also want to check on the integrity of the joists themselves. Termite damage is typical in older homes, and if the beams that the electrical box is attached to have damage, you may want to consider another source of support.

If you cannot find enough information about the electrical box, assume it’s not strong enough to support a ceiling fan.

When it comes to electrical work and construction, it’s always better to be safe than sorry. The worst thing you can do is install the ceiling fan in an electrical box unable to support it. Even though the fan may be supported for a short time, this may only be temporary.

The longer the fan spins and rocks, the more likely it’ll work itself loose and fall. If this doesn’t happen, another possible outcome is that the electrical box will fall wholly or partially through the ceiling, causing drywall damage.

This could prove to be a costly and messy mistake. It could also be dangerous if the ceiling fan should fall on top of someone below.

Installing a ceiling fan in an existing light fixture box is great as it allows you to do the work yourself, saving time and money. However, this isn’t always a guarantee, and it’s crucial to inspect the electrical box to determine its integrity and capabilities.

Hanging a ceiling fan with an electrical box incapable of supporting its weight may be disastrous. It’s better to be safe than sorry and seek the experience and knowledge of a licensed electrician or handyman to be sure.

This will allow you to enjoy your new ceiling fan with certainty and peace of mind.