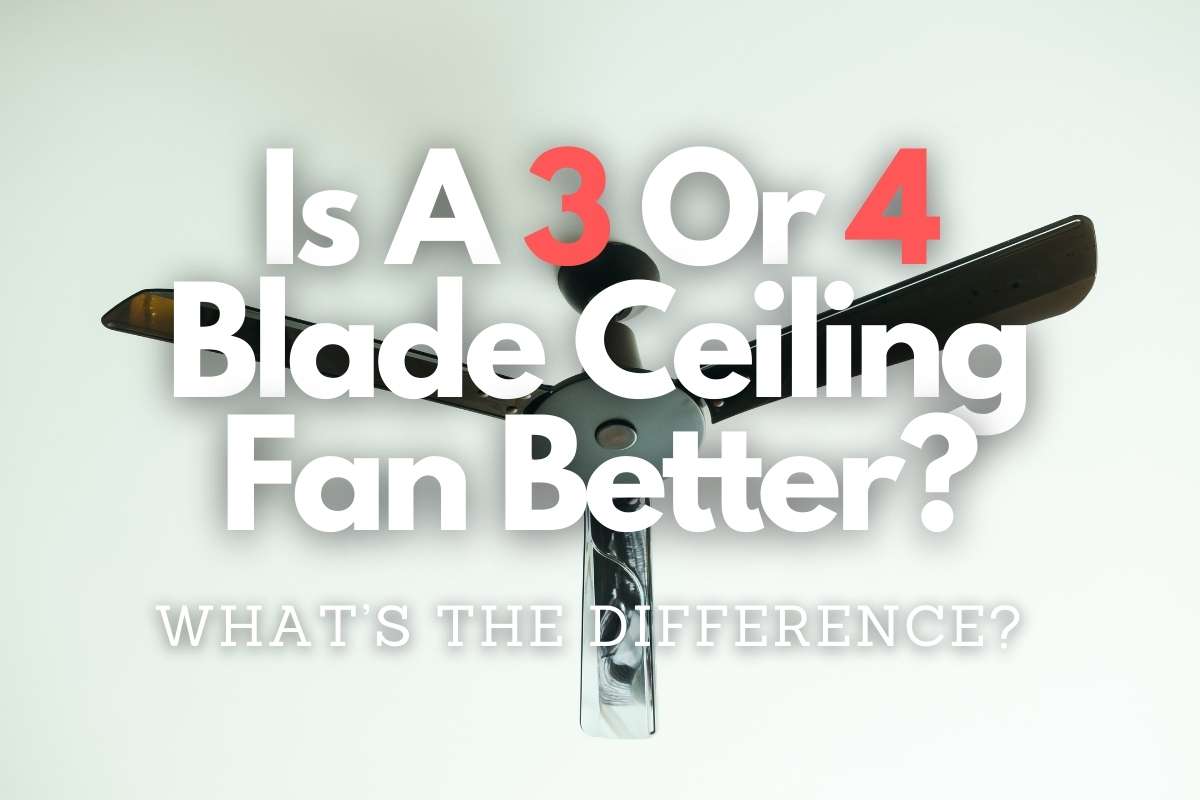 Ceiling fans come in many different styles and types. Many people are confused if they should get a ceiling fan with three or more blades. Here are the differences and what is best for your situation.

In general ceiling fans with three blades are cheaper more energy efficient and usually produce more/faster airflow. They are however noisier and usually don’t look as good as fans with four or more blades. 3 blades is best for most airflow with low running costs.

Let’s take a look at the details differences between fans with more and less blades and what’s best for you.

Difference Between 3 And 4 Blade Ceiling Fans

Suggested: Does the amount of blades on a ceiling fan matter?

Here are the main differences between ceiling fans with more and fewer blades.

Let’s take a look at those factors in detail.

Ceiling fans with fewer blades tend to be a bit more energy efficient. There is less weight to move around and less aerodynamic drag from the blades. This results in a lower energy consumption for a given amount of airflow.

A smaller, less powerful motor can move fewer blades much faster than a heavier motor can more more blades. Less than three blades would be more efficient but in practice they don’t work all that well. A single blade is obviously inherently unstable. There are some ways around that but not without adding more weight which is counterproductive.

Two blades could work but they put more stress on the bearings and mounting points and aren’t as inherently stable as three blades or more which is why they’re not often seen.

Suggested: How much electricity do ceiling fans use?

This is where things get even more complicated. You would expect more blades to move more air. That’s not necessarily the case though. There are a few factors at play that impact airflow.

If you would have a ceiling fan that has exactly the same blade shape as another one and it spins at exactly the same speed, there would be more airflow. But it would also cost more energy.

When you add more fan blades to the same fan, the motor (and other parts) is under more stress. In the first place because more blades are heavier but also because there is more aerodynamic drag. Both slow the fan down. And this lower speeds means less airflow. Yes, more surface area on the fan blades compensates that a little bit but not all the way.

Of course if you change the blade length, the airflow will change dramatically.

Most three bladed ceiling fans are designed to be effective at producing a lot of airflow efficiently. That means they have a ‘functional’ design. Or in other words, they look how they have to to do their job well but your eyes or interior haven’t really been taking into account.

Of course there are exceptions but in general, ceiling fans with more blades tend to be designed a bit more. They just look better, are available in different styles and often are finished in a nicer way. All of that makes them much better to look at.

Adding a blade to a ceiling fan actually cuts down the noise pretty considerably. This means you give up a bit of airflow and efficiency but it’s quieter and therefore more comfortable.

In the first place that’s because fans with more blades tend to spin a bit slower. Slower speeds means less turbulence which is what creates noise. That alone will give a good reduction in noise but there is something else.

Even if you’d spin a four blade at the same speed as a three blade, it would be a bit quieter. There are a few reasons for that. The first is that more fan blades tend to create less turbulence because of how the air vortex from the previous blade interacts with the next one.

Also, fans with more blades often have a shallower blade pitch. While that again does cost some efficiency and airflow, it also means that the blade produces less turbulence in the air, in turn reducing noise.

The last difference is a pretty simple one and another reason why three blade fans tend to be more popular in places with less expendable income. Three bladed fans need less material to be produced and can be produced a bit easier because there are fewer parts. Because there is less stress on the motor, that’s often a bit cheaper too.

That all leads to lower prices for the consumer. For the average American that difference might be small but for others it can be a huge difference in price, especially if you also take more airflow and higher efficiency into account.

Three bladed ceiling fans tend to be a good compromise between functionality and price/running costs.

Is More Or Fewer Blades On A Ceiling Fan Better?

So what’s better? A ceiling fan that has 3, 4 or even more blades?  It depends on where you live, what your expectations are from a ceiling fan and if you use it in combination with an A/C.

Very quickly summarized, the fewer blades a fan has, the more air it can move with the same motor but the noisier it’ll be. Fewer blades also make the fan cheaper.

So different people will want to make different trade-offs. If you live in a place where it’s very hot (tropical locations) and don’t necessarily want to use an air conditioner, a fan with fewer blades is going to be more effective. It’ll likely move more air and do so faster. The higher airflow means you get a greater wind-chill effect which is what keeps you cool.

However, if you don’t need a tornado in your house to stay cool or you use the ceiling fan in combination with aircon, the increased efficiency and airflow of a 3 blade fan is not necessary. The other benefits of having more blades then become more important.

In combination with airconditioning, the ceiling fan is used to distribute the cooler air more evenly throughout the space. There is still a wind-chill effect, but this is just amplifying the cooler air of the A/C and/or allows for a higher temperature on the A/C to save electricity.

Suggested: Do ceiling fans help in the winter?

The small difference in efficiency is really not important if you compare it to the power consumption of an A/C unit and the fast airflow is not necessary. That means the lower noise and often better designs become a more important consideration.

So in short; If you only use a ceiling fan to stay cool in a very hot climate, fewer blades will move more air faster and with less electricity. If you don’t need the absolute most airflow per Watt, live in a more moderate climate and/or use the ceiling fan in combination with the A/C, more blades will be quieter and more comfortable.