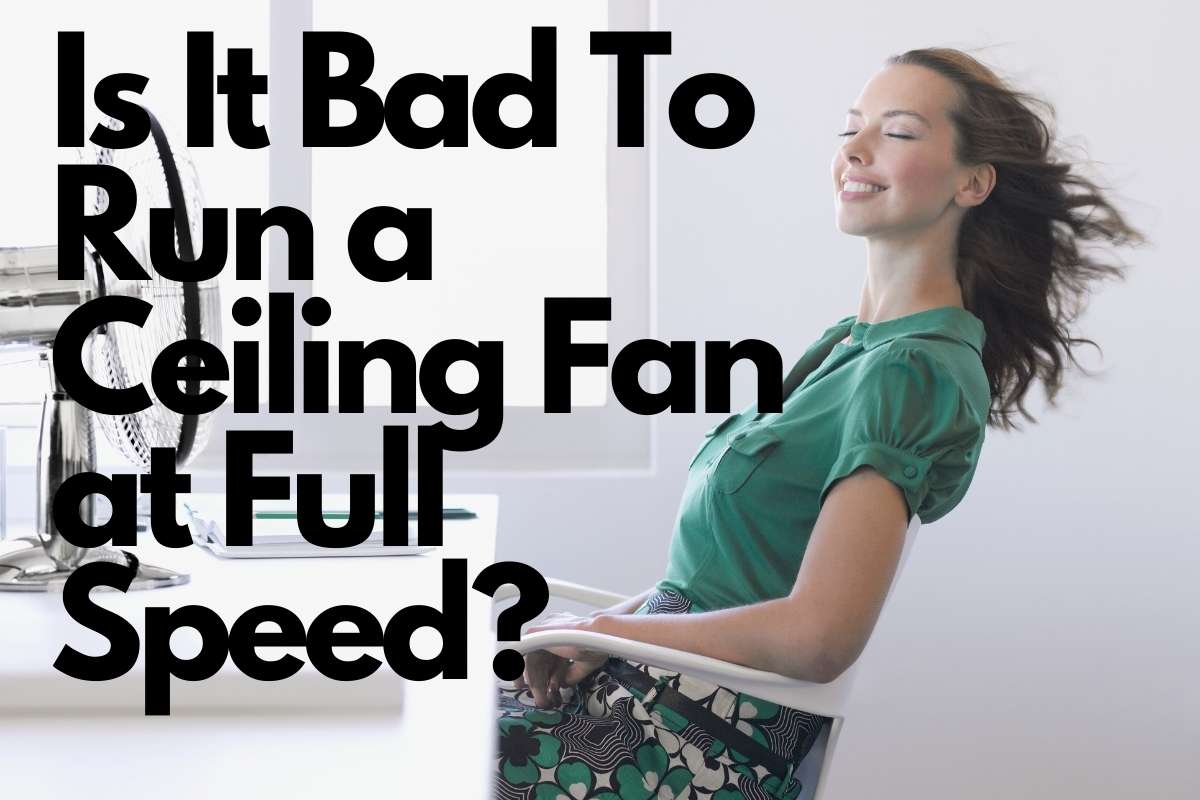 When the weather is hottest, running your ceiling fan at the highest speed setting seems like the logical approach to fight the heat. However, while watching the fan as it wiggles furiously at full speed, you may be wondering if it’s bad in any way.

The rest of the article will look at all you need to know about running your ceiling fan at full speed. You’ll also find answers to other questions you may have about your ceiling fan.

Most ceiling fans typically have a simple alternating current (AC) motor (combined with a tight wire section) and the rotating part known as the rotor. The result is a ceiling fan that can reach high speeds. Manufacturers use the fan’s speed control device to give you a level of control over how fast your fan can go.

The full speed is typically not the fastest your ceiling fan’s rotor can go, but it’s the perfect sweet spot to give you a powerful blast of air while still allowing the fan’s parts to run safely for years.

So, since your ceiling fan is optimized to run at full speed, you shouldn’t have any fear about using it at that speed setting—except in certain conditions.

When You Shouldn’t Run Your Ceiling Fan at Full Speed

You shouldn’t run your fan at full speeds in the following scenarios:

The Ceiling Fan Is Very Old

It’s not uncommon to find homes with ceiling fans as old as the house. You probably have one of these in your house right now. You grew up with them, and they are still soldiering on.

Such fans can go another decade easily. However, the parts may now be too weak to sustain full speeds for long periods. You can run the fan at the highest speeds, but there’s always the risk that it will break down.

You’ve seen those ceiling fans that swing from side to side while they work. The swinging may be due to improper installation or joints and nuts wearing down over the years. If you find one of these, you should be careful about running them at full speed.

Under the intense full-speed rotation, the fan can break off from its sitting. It’s an unlikely scenario but a real risk in such situations. Find a repairman to go over the installation. After repairs, the fan will stop wobbling too much as it works.

Can a Ceiling Fan Catch Fire While Running at Full Speed?

A ceiling can catch fire while running at full speed, but the chances of that ever happening are very low. Fans do not get too warm or use up a lot of electrical current while working.

The small chance of a fire is a possibility because, as is the case with most electrical designs, something can go wrong.

The brushes in motors can wear out after a decade of use or longer. The fan may develop defects over time or come with such a defect straight from the box. Any disruptions in the internal circuitry can increase electrical current and cause a fire.

However, all of these possible causes of a fire can come into play whether you’re running the fan at full speed or not.

Can You Run Your Ceiling Fan at Full Speed 24/7?

You can run your ceiling fan at full speed 24/7, as fans are reliable enough to withstand such a level of use. However, it only makes sense to run a ceiling fan round the clock if you have a genuine need to do so.

There are also a few things you should keep in mind if you’re thinking about running your fan at full speed round the clock:

Is It Safe To Sleep Overnight Under a Ceiling Fan at Full Speed?

In general, it’s safe to sleep under a ceiling fan at full speed overnight. The movement of air can help improve the quality of your sleep and help you save money on cooling. However, those with allergies or sinus problems may wish to reduce fan speed when sleeping.

There are other benefits to sleeping under a ceiling fan at full speed:

However, there are a few downsides you should keep in mind:

If the weather warrants sleeping overnight with your ceiling fan at full speed, the benefits of having the fan on outweigh the potential downsides.

Suggested: Does a ceiling fan cool the room?

There’s nothing wrong with running a ceiling fan at full speed unless the fan is faulty or visibly worn out. Perfectly working fans are designed to work at full speeds for years without incident.