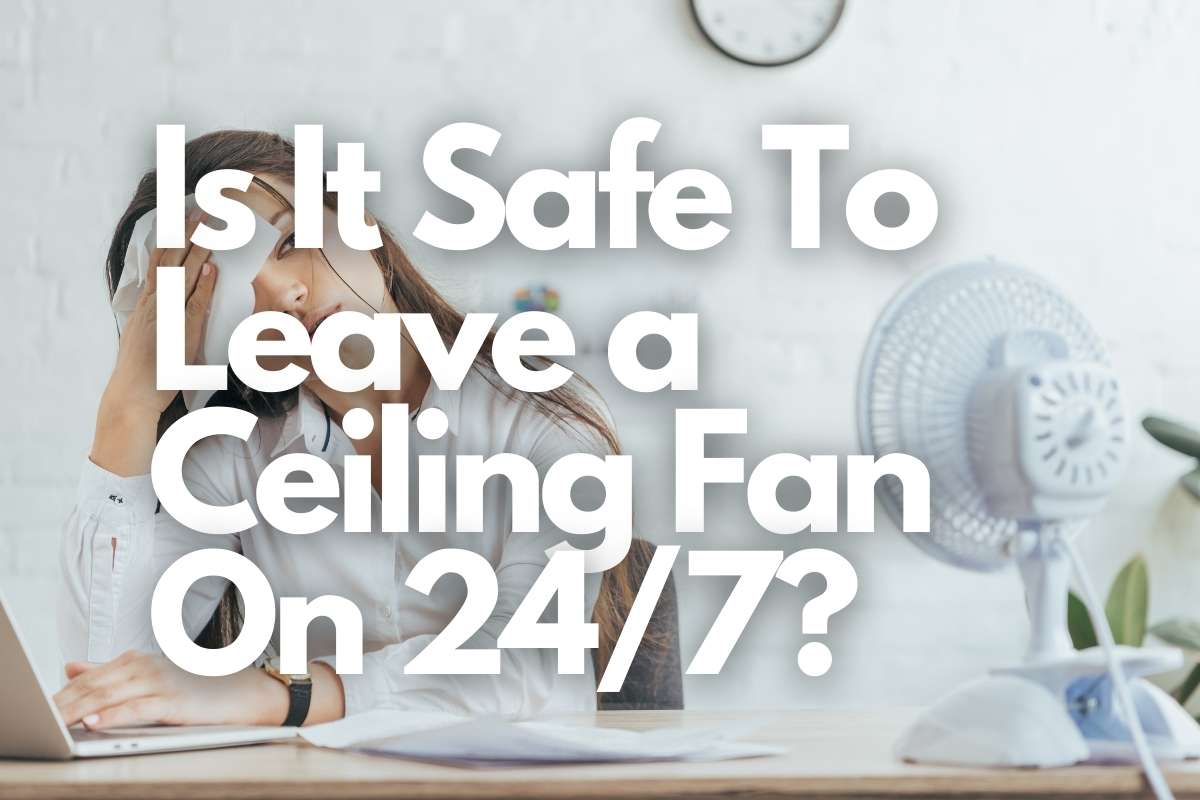 Ceiling fans provide much-needed comfort in the hot summer months. They contribute to lower electricity costs than air-conditioners, making them an excellent option for affordable yet effective relief. There are, however, safety concerns around keeping your fan on throughout the day.

While it’s generally safe to leave a ceiling fan on 24/7, it’s not advisable. Old, low-quality, or otherwise problematic ceiling fans can present safety hazards if left on for too long or unattended.

How Long Can You Leave Your Ceiling Fan On?

How long you can leave your ceiling fan on depends significantly on the quality of the fan. How old a fan is and how well it’s kept clean also make a difference.

On average, you can leave your ceiling fan on for 8 hours without worrying about significant safety hazards, such as ceiling damage. If you run the fan for 24 hours a day for a week, it won’t necessarily cause a fire in your home. However, the fan can overheat, causing long-term damage to it.

The potential problems with leaving a ceiling fan are mostly related to overheating and fire hazards. That’s what you have to be careful of. On a high quality, new ceiling fan that’s properly installed, this risk is very small. You’d likely be able to leave a good new fan turned on for years without issues.

However, things start to become a little more problematic when you have a old fan or one of low quality. Dust buildup is also a problem.

Older fans are more likely to have developed some wear and tear that would lead to overheating or other problems. Of course that really depends on what shape the particular fan is in.

Low quality ceiling fans are much more likely to have a low quality and underpowered motor. Lower quality motors are built in a way that use more electricity to do the same thing as higher quality ones. They’re less efficient. The electricity that isn’t turned into rotating the fan blades, is turned into heat. So the less efficient a motor is, the more heat is produced. The more heat, the higher the risk of wiring getting damaged and causing a fire. Especially if you consider that low quality fans won’t only have lower quality motors but also lower quality wiring. Suggested: Can a ceiling fan motor be replaced?

How clean your fan is also has an impact. Things catch fire at different temperatures. Dust can be made up of many different things but dust is generally flammable. So if you combine a ceiling fan motor that’s a little too hot and you add a ton of dust (which also insulates so the cooling capacity of the motor is reduced compounding the problem.) you have a situation that can be a problem.

So while every situation is different, leaving even a dirty and low quality ceiling fan turned on for 8 hours is not a problem (if it’s working properly of course). Higher quality fans can be kept turned on for much longer.

It also depends on the speed you run your fan at. Of course the faster you spin a motor, the more electricity it uses and the more heat is produced as a result. If you run a ceiling fan at half the maximum speed means you are not pushing it to the limits and the time you can run it without stopping is also greatly extended. Read more about using your ceiling fan at full speed here.

Buying a fan that has more CFM than you need is good for this reason. Read more about the CFM you need for your room size here.

Think about your car. How how long can you drive your car at full throttle (if the road would allow)? A new car would do it for quite a while but at some point it would probably break or overheat. However, use the engine in your car with some care and only use the maximum power some of the time and it’ll last a hundred thousand miles easily. With an older car or one that hasn’t been cared for, the limits are much lower.

Should you leave a ceiling fan on?

The question if you can is one thing. If you SHOULD do it is a completely different question.

A ceiling fan doesn’t cool down a room. It provides airflow which makes people and pets feel cooler because of the breeze. A ceiling fan also helps circulate air in a room and so equalize the temperature. If there is an open window or door, a ceiling fan helps distribute the air that comes through that opening throughout the room.

That fresh air might then cool down the floor and other objects in the room making it slightly cooler in the end but only if there is a large difference in air temperature between outside and inside.

So, while you might feel that a ceiling fan makes a room more comfortable, it only makes you feel more comfortable. The other benefits like distributing air are very minimal when not in the room. So it’s better to turn off the fan while you’re not in the room. The benefits of keeping the fan running are very small and most of those benefits will be the same if you just turn on the fan when entering the room. The breeze on your skin is by far the thing that makes a ceiling fan effective so if you’re not there a ceiling fan is mostly ineffective.

So there is no reason to keep a ceiling fan turned on all the time. 90% of the benefits you want from a ceiling fan are only there when you are in the room.

Of course when you’re trying to dry a floor or air something out, a ceiling fan can help quite a bit and leaving it on is useful.

When improperly installed, a ceiling fan can pose a danger in your home. Installation problems are likely to occur if you don’t hire a professional to install the fan for you. Common installation issues include:

To minimize the safety risks associated with ceiling fans and to ensure your fan runs optimally, follow these rules:

Efficient and affordable, ceiling fans function as lifesavers in the summer heat. One may, however, have a few safety concerns about using ceiling fans continuously for days and weeks at a time.

You shouldn’t run your fan for extended periods to prevent overheating. When choosing a ceiling fan for your home, always choose a quality one and have it installed safely, preferably by a professional.