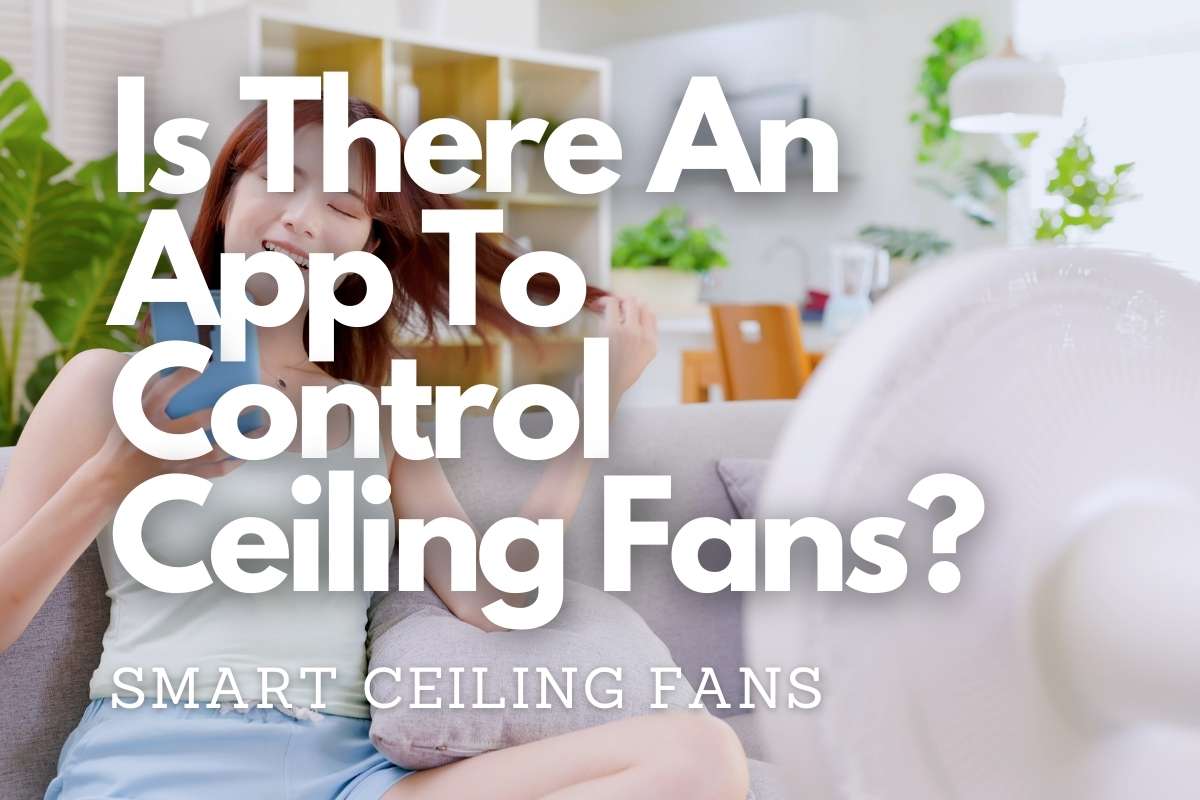 Remote controls are always lost and you don’t want to get up to turn your ceiling fan on/off. Wouldn’t it be great if you could control your ceiling fan and light with an app without having to get up? Here’s how you can do that.

Let’s dive into your options a little deeper below.

Is There An App To Control Ceiling Fans?

There are smartphone apps that control your ceiling fan. Even controlling by Alexa or similar is possible. However, it all depends on the fan you’ve got. A basic ceiling fan is just controlled by a wall switch, remote or pull cord and that’s it.

However, if you’re going to buy a new one, there certainly are options for smart ceiling fans. There are also kits to connect your ‘dumb’ ceiling fan to Alexa or another digital assistant and make it controllable by app (or voice) through that way.

So while most ceiling fans are not controllable by a phone app, there are new fans that can do this and there are conversion kits that allow you to change a normal ceiling fan into a smart fan. Let’s look into both those options below.

Related: What type of ceiling fan control is best for you?

Smart ceiling fans that are sold as such are the best solution if you’re buying a new fan and you need phone app control. A fan that’s designed to be smart enabled is going to give the the most frustration free experience. The other solutions below work but they’re universal solutions so they might not work perfectly with all ceiling fans. With a smart ceiling fan you can be sure everything works properly from the beginning.

Manufacturers can make your fan smart in slightly different ways. Most of them are WiFi enabled and can link up to any of the smart home controllers like Alexa but some have their own app to control the fan directly. This works very well and is usually a simple and pain free process.

The coolest smart fan at the moment is the Vortex for me. It looks futuristic and has all the control options you could want. You can use a wall switch or remote but also use your phone with both Bluetooth and WiFi. It’s wet rated so can be used indoors or outdoors and uses a high quality DC motor that’s quiet and energy efficient.

If you’re looking to smarten up your house and also like app controlled lights and other things in the house, check out the shop that sells the Vortex fan. they have a wide range of smart fans, lights and more that can all be controlled by their own app that works well. You can find them here on Amazon.

Turning a normal ceiling fan into something smarter is going to be more interesting for many people. It’s not necessary to buy a whole new fan just because you want to control it with your phone. Replacing a perfectly good fan is unnecessary and wasteful. However, if your fan has to be replaced anyways, you’ll likely have a better experience by just buying a smart fan. Smart fans are supposed to be that from the beginning so it will often be a bit smoother.

However, that doesn’t mean you can’t make something else work properly if you get the right stuff. There are two good ways you can go. Both use a smart assistant like Alexa or google home. However, not all solutions mean you have to use the hub. Luckily neither of the solutions is very expensive.

Here are the two ways you can add phone control to your normal ceiling fan:

The first way is to get a smart wall control panel that replaces your current one. This works best if you have a ceiling fan that is currently controlled by a wall panel or if you have a power outlet where the wiring of the fan comes from. However, if you currently have a ceiling fan with remote and no wall switch, the second option below is better because this wall switch isn’t always compatible.

The benefit of this type of switch is that you can use both the wall controls and a phone app so you’ve got the choice. The wall panel has buttons for the fan, light and speed/dimmer control. You get the same options for control on your phone.

The TreatLife smart wall switch is the best and most popular option in this category. It works well and looks clean and modern. It probably looks better than the wall control panel of an older fan you got at the moment.

You don’t need an Alexa or Google hub to make this switch work because the app can connect to the switch directly. However, if you do add a smart home hub, you can add voice control as well.

The second option is to add a little WiFi receiver and fan controller to the fan. These are little boxes you wire in and leave in the fan canopy. The wiring is easy but make sure your fan’s canopy has enough space to fit the box.

These WiFi controllers do not require any wall panels or power outlets to be changed so they’re the easiest to install.  The controller can directly connect to your phone with the smart life app but if you connect it to an Alexa or Google assistant hub, you can add voice control to your fan.

These kits often come with a normal remote control as well. For some people this is a plus, for others it’ not. But at least you have the choice.

This Aubric WiFi fan controller is affordable and works. It’s easy to install and comes with a remote control. It can control the fan speed (3 speeds) and can be used to turn the light on/off. However, there is not dimmer control for the light.