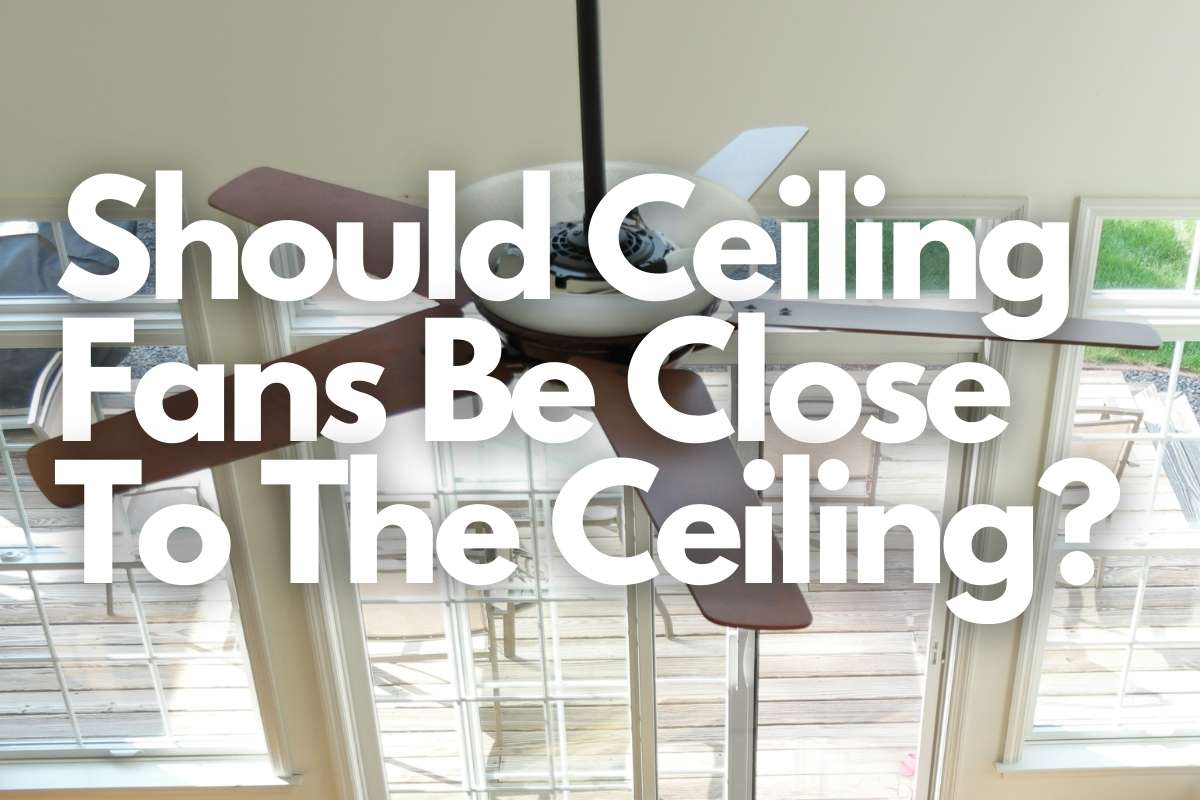 Not all ceiling fans hang at the same height. Some have the blades close to the ceiling while others hang quite far down. Is there an idea distance from the ceiling to the fan blades and does it matter? Here’s what you want to know.

The top of the blades of a ceiling fan should be at least 8” away from the ceiling although 10”+ is better. This allows for sufficient airflow to replenish the air above the fan blades. Having enough clearance helps a ceiling fan produce more airflow more efficiently.

Why that is and how you can adjust the distance between the fan blades and ceiling can be found in detail below.

How Far Should a Ceiling Fan Be From The Ceiling?

This goes for standard residential fans that are around 52” in diameter. For larger fans, adding more distance to the minimum requirement is a good idea. To get an idea, the Big Air 108” fan hangs at 33” from the ceiling as standard. While that’s more than strictly necessary, 8” or 10” wouldn’t be nearly enough for a fan of that size.

For fans larger than 52”, adding about 0.5” in clearance on top of the 10” recommended for every 4” extra in diameter gets you in the right ballpark of the clearance you need. Size isn’t everything, it’s more about the amount of airflow a fan produces but the size is a good proxy for airflow.

But why is that clearance so important? Find out below.

Why Does Ceiling Fan Clearance matter?

So why is it so important to have enough clearance from the top of the fan blades to the ceiling? The answer is airflow. It is pretty simple if you visualize what is going on when turning on a ceiling fan:

Now if the gap between the fan blade and the ceiling is too small, the air can’t move freely enough from the sides to completely fill the low pressure area. And if there is less air available to scoop up, the fan has to work harder to create the same airflow. This means more energy consumption, more noise and less airflow than if there would be enough clearance. The explanation above is a simplified version but you get an idea of what is going on.

So by increasing the gap between the ceiling and blades, the air can move more freely and you get rid of all the problems. This is also why it’s a good idea to increase the clearance for large fans. Large fans simply move more air so the amount of air that has to flow back above the fan is larger. Also, the diameter is larger so it takes a little bit longer for the ‘replacement air’ to get to the middle of the fan. By hanging large fans a bit lower, you give a more free flowing route for the air so it can be replaced fast enough.

The fan pushing the air down and this same air flowing back up is what creates the air circulation that makes ceiling fans so effective. Ceiling fans do cool down people in a room by flowing air directly onto the skin but another way they cool a room is by circulating air in the whole space.

But is it possible to change the distance between the fan blades and the ceiling? Find out below.

Suggested: How much airflow does a ceiling fan need?

How To Change How Low a Ceiling Fan Hangs

If and how you can actually change the height your ceiling fan blades are at depends on the type of ceiling fan you have. For adjusting height, there is one thing that’s crucial: a downrod. The downrod is the little rod that goes from the canopy (part that mounts on the ceiling) to the blade assembly.

There are two types of ceiling fans: Ones with a downrod (the majority) and ones without a downrod (so called hugger or low profile fans). Why is this an important distinction? Here’s why:

Low profile fans are one unit. The blades and canopy are just a single item that mounts to the ceiling. There is nothing you can do to get the blades further from the ceiling and closer to the floor. You mount it on the ceiling and that’s it. In most cases, a well designed low profile fan should have the blades at least 8” from the ceiling anyways. Some are a little less to get a really low profile. You start sacrificing some airflow by having less than 8” clearance but sometimes it’s necessary if you’ve got low ceilings. If you’ve got really tall ceilings, a hugger fan is not the best idea because it means the blades will be very far off the floor. You want to keep the blades at about 8’-9’ off the floor.

Fans with a downrod are a bit more flexible in how far the blades are from the ceiling. That’s because on the vast majority of ceiling fans the downrod can be changed. Manufacturers make downrods in different lengths. And of course if you use a downrod that’s longer, the blades will hang lower. So if you’re not entirely sure what works properly in your situation, make sure to choose a fan where the downrods are replaceable.

Distance from the floor

Suggested: What’s the minimum height to mount a ceiling fan?

Try to keep the bottom of the blades at least 7′ from the floor but 8′-9′ is much better. It’s uncomfortable and even dangerous to constantly have to worry about getting hit by a fan blade when you stand up.

In some situations (low ceilings), it’s going to be almost impossible to get enough clearance both between the blades and ceiling and between the floor and blades. This is why low profile fans exist and why some of them have less than 8″ clearance between the blades and the ceilings. It’s done that way to create a fan that’s low profile enough so it can be used on low ceilings. Any fan is better than no fan so the slight decrease in efficiency and increase in noise is worth it in those situations.

Most of those low profile fans are designed to work on 8′ high ceilings. If you have ceilings that are lower than 8′, you should consider some other cooling choices because it’s going to be dangerous to install a ceiling fan with blades hanging very low above the floor.

link to Can a Ceiling Fan Get Wet? Is It Safe?

You’ve got a ceiling fan and would like to mount it somewhere it could possibly get wet. Is getting a ceiling fan wet a problem and what kind of ceiling fan can get wet? Here’s what you want to...

Continue Reading
link to What Is The Most Energy Efficient Type Of Ceiling Fan?

Staying cool is important but so is keeping your energy bill affordable. Is there a difference in how much electricity ceiling fans use and what is the most efficient? Here’s what you want to...