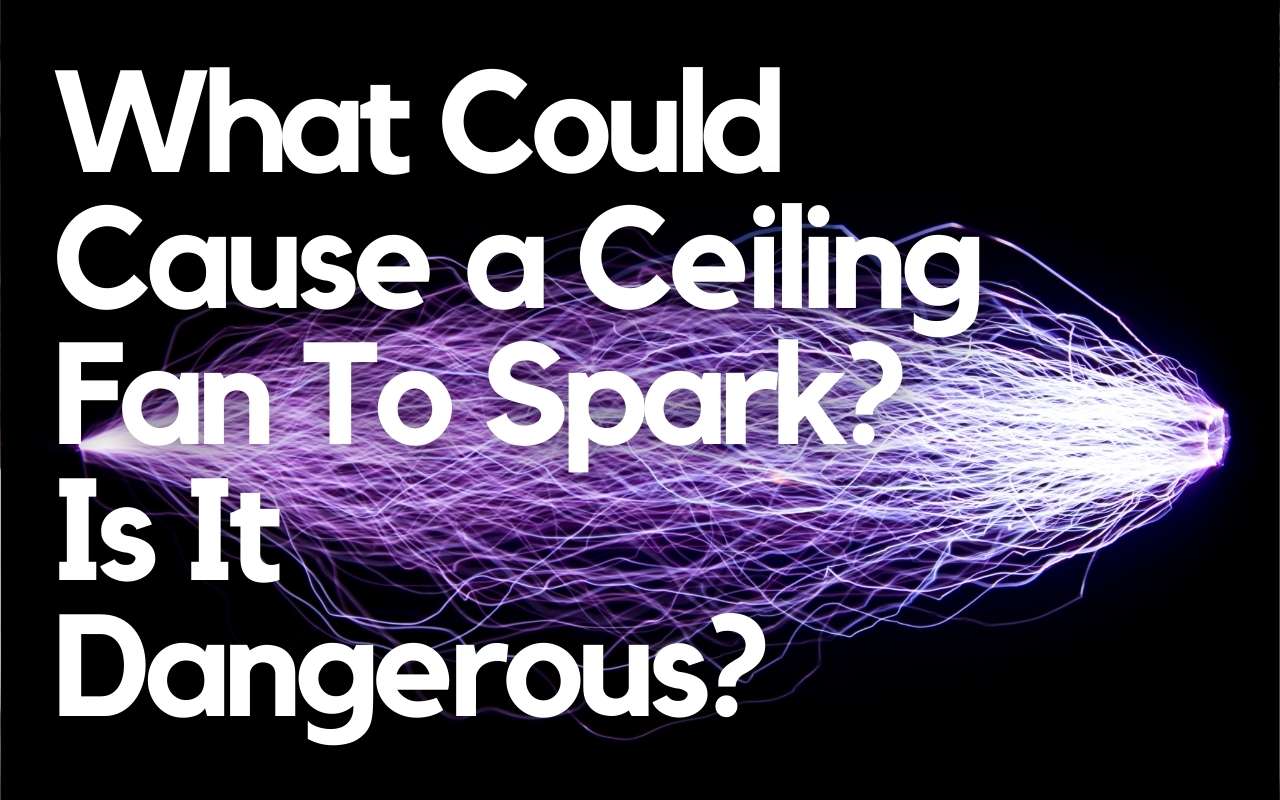 If you notice sparks coming from your ceiling fan, you should get to the bottom of the problem and fix it sooner rather than later. It could be a sign of a serious and time-sensitive problem.

A ceiling fan could spark due to a short circuit in the wiring. Short circuits cause wires to overheat, melt, and spark, creating a very serious fire hazard. Cut power to the fan immediately and fix the problem as soon as possible. A burned out light bulb could also cause a ceiling fan to spark.

Read on to learn more about why ceiling fans may spark and what you should do about it. This article will detail the dangers of a sparking ceiling fan and how to handle them.

Reasons Why a Ceiling Fan Sparks

If your ceiling fan starts sparking, check whether they are true sparks or just a bright flash and popping sound. This will tell you whether the situation is dangerous; in one case, it’s likely just a burned-out light bulb, but in the other, it could be a short circuit that needs professional help.

Sometimes, a ceiling fan appears to spark simply because a light bulb has burnt out.

In an incandescent light bulb, the filaments sometimes fail when a surge of power comes through, making a bright flash and a popping sound before burning out entirely. You’ll know that a bulb has burned out because it flashes and pops just once and then has black soot inside the globe afterward.

If this happens, you simply need to unscrew the bulb, check the wattage, and then replace the bulb with a new one of the same wattage. Make sure that you screw the new bulb in firmly but not too tightly, as a heavy hand can flatten the tab in the socket that powers the light.

To be safe, you should turn off the power to the fan before replacing the lightbulb. Turning off the power will reduce any risk of electric shock.

Suggested: Can you replace any ceiling fan light bulb with an LED one?

If you see true sparks flying from the housing of the fan and the light bulb burns out, you’re likely dealing with a short circuit in the wiring. If this happens, the breaker to the room will likely flip off, in which case you should leave it that way until help can arrive.

A short circuit happens when two wires touch each other that shouldn’t, providing a new, shorter path for the electricity to travel. This new path reduces the resistance to the flow of electricity, which in turn produces more heat. This heat buildup is why a short circuit is considered a fire hazard.

Suggested: Can a ceiling fan motor be replaced?

Fixing a short circuit is often a specialist’s job, as there is a risk to handling complicated electrical work alone. However, if you do wish to proceed, you can turn off the breaker to the room, remove the fan from the ceiling, and look for wires that are melted or blackened.

In some cases, you’ll see exposed wires due to a cap falling off, which can lead to worn wire insulation.

You’ll need to repair the wiring, reassemble the fan, and check each light bulb socket for damage that may have occurred due to the short circuit. Sometimes the heat from the short circuit can cause light bulbs to fuse into the socket, in which case you’ll need a specialist to come to fix the problem.

Causes of a Short Circuit

Any of the following things can cause short circuits:

Generally, when wires are allowed to become loose or frayed, there is a danger of a short circuit developing. If you notice a broken or frayed electrical cord, make sure that you unplug it immediately so that it does not cause a short circuit.

Suggested: 13 Reasons why your ceiling fan is noisy and how to fix it

Why Short Circuits Are Dangerous

Short circuits happen, but they are very dangerous. Typically, home electrical systems have a built-in protective reflex to flip off the breaker to a room when a short happens. If you notice a breaker flipped off automatically, leave it that way and call a professional electrician.

If you leave a short circuit unfixed, the heat created by the shorter path of electricity will build up and spread, greatly increasing the chances of a house fire. If you know that you have a short circuit in your home, make sure that you keep the breaker to that room flipped off until a professional electrician can come to repair the issue.

Dangers of Fixing Short Circuits Yourself

“Every year, hundreds of people are injured or killed in the U.S. due to faulty DIY electrical repairs,” say the experts at Bonfe Basics. The main risks involved are the risk of electrical shock and the risk that you will leave the wires in bad shape, creating a fire risk.

Professionals can handle these repairs safely because they are very comfortable with the equipment and have protective gear.

In most states in the U.S., you cannot legally install or alter the wiring in your house without having it approved by a licensed electrical inspector. This shows you how delicate electrical repairs are and how seriously you need to take the risks of a poor electrical job.

Even handling small appliances and fixtures like a ceiling fan, you need to be very careful and should probably call an expert.

Suggested: 8 reasons why your ceiling fans isn’t working and how to fix it

If your ceiling fan is sparking, there’s a chance that you have a serious problem: a short circuit. You can remove the fan from the ceiling and check the wiring to confirm that the wires are melted or disrupted, or you can simply call an expert when you first notice the sparks. In either case, make sure that you shut off the power to the fan before you do any inspecting.