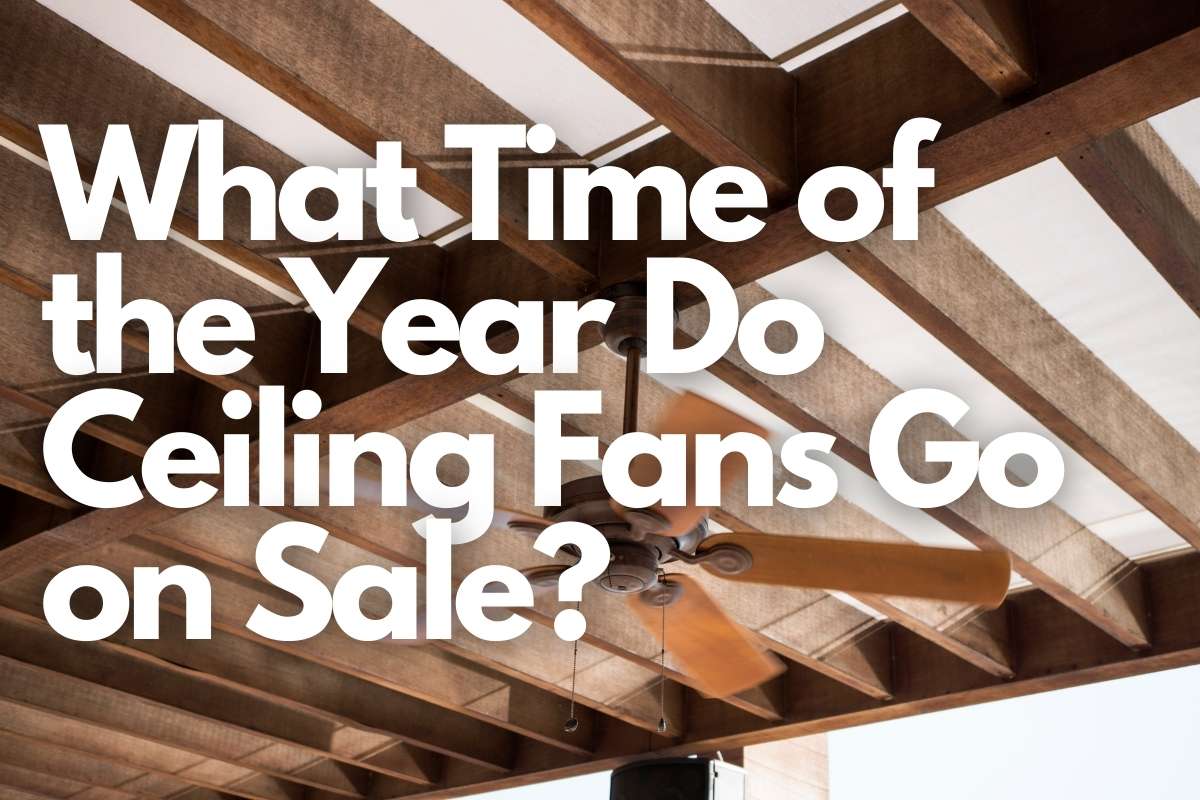 You might expect ceiling fans to go on sale during hot weather when retailers compete to attract people who want to buy them. You’d be right, but that isn’t the only time to watch for sales.

Ceiling fans go on sale from spring through early fall and possibly during the winter. In addition to competing for summer sales, retailers put ceiling fans on sale in late spring to clear out last year’s models. Sales towards the end of summer reduce the inventory of current year models.

Read on to learn the details about the months that ceiling fans go on sale and why. I’ll also include tips on choosing a ceiling fan and determining whether the fan is a model from the current or previous year.

What Months of the Year Do Ceiling Fans Go on Sale?

Ceiling fans go on sale from May through August and possibly in November and January. During these months, retailers want to clear inventory and compete with other retailers to attract people ready to buy.

Sales of ceiling fans may coordinate with sales of related merchandise such as home decor sales or DIY home improvement sales.

May Sales for Ceiling Fans

Warmer days in May and Memorial Day turn everyone’s thoughts to outdoor living. Retailers pair deals on DIY supplies and equipment for building or sprucing up patios with deals on outdoor ceiling fans. Sales on indoor ceiling fans go along with sales on room air conditioners.

Like May, June sales include equipment and supplies for DIY home improvement projects. Look for those sales to include both indoor and outdoor ceiling fans. Sales in May and June likely have the dual purpose of clearing last year’s models and introducing new models.

Sales on patio decking materials continue into July. A retailer concerned about an overstock of outdoor ceiling fans might begin offering sale discounts during July. However, July sales offer smaller discounts. But if your fan stopped, you can save money while regaining your cool.

Late August and Labor Day sales that start early offer some of the lowest prices on ceiling fans. With summer ending and the fall season approaching, retailers don’t want bulky items like ceiling fans taking up space in their stockrooms or warehouses.

Labor Day sales and other sales in September, such as summer clearance sales, offer even better deals on ceiling fans than August sales. This month may seem late in the year to buy a fan, but remember, the month can have some warm days, and this appliance can save you from turning the AC on.

You’ll find power tools on sale on Black Friday and Cyber Monday. Retailers with an excess inventory of ceiling fans might include them as a combination DIY project and home decor gift idea. Besides, ceiling fans circulate warm and cool air equally well. Just reverse their direction.

Other Times To Look for Sales on Ceiling Fans

The biennial Lightovation Dallas International Lighting Show, one of the largest residential trade shows in North America, is usually held in January and June. Other trade shows occur around the world. Most take place from late August through December, although one is held in March.

Buyers for large retailers and owners of small stores know their customers. They place large orders for ceiling fan models they know will be popular. They may also place small orders to test market ceiling fans from new companies or fans with unique styles.

Retailers use sales to draw attention to ceiling fans from these small, sample orders and to clear their inventory of test-marketed fans that didn’t sell well. Test marketing is most likely in January, May, and June, with clearance of less popular styles occurring in later months.

How To Identify the Model Year of a Ceiling Fan

To read the stickers on installed fans, use your cell phone camera to snap a picture.

Consumer Reports provides an excellent basic ceiling fan buyer’s guide. They discuss airflow, blade shape, factors that reduce noise, fan size, the lighting fixture, the types of lightbulbs, the wet/damp rating for bathroom and outdoor fans, and matching the fan to the room.

The San Diego Union-Tribune expands on the Consumer Reports guide. They describe the new materials used to construct the blades. They also discuss new technology, such as using smart-home technology to control your ceiling fans.

The video discusses the style of each fan, the home decor styles that the fan complements, the ease of installing the fan, and other features.

You can check out the following fans that Review Tube featured or are similar to what they mentioned (all available on Amazon.com):

No matter what month of the year, you can typically find a deal on a ceiling fan. May it be summer or winter, you can use a ceiling fan to save on heating and air conditioning costs.

In the summer, you can set the fan to turn counterclockwise. This pushes air downward, which makes it feel cooler on your skin.

During winter, set the fan to turn clockwise to pull the air up toward the ceiling, where it spreads out from the fan. This draws the warm air from the ceiling back down to make the entire room warmer.

link to 7 Differences Between Indoor and Outdoor Ceiling Fans

Indoor and outdoor fans serve the same function, which is to circulate the air and freshen the atmosphere in an area as well as to cool the occupants. Such functions must be performed in different...

Continue Reading
link to Are Cheap Ceiling Fans Worth the Money?

With the peak of the summer months approaching, your home can quickly become hot, stuffy, and uncomfortable. You might think buying a cheap ceiling fan to cool the room will solve the problem —...