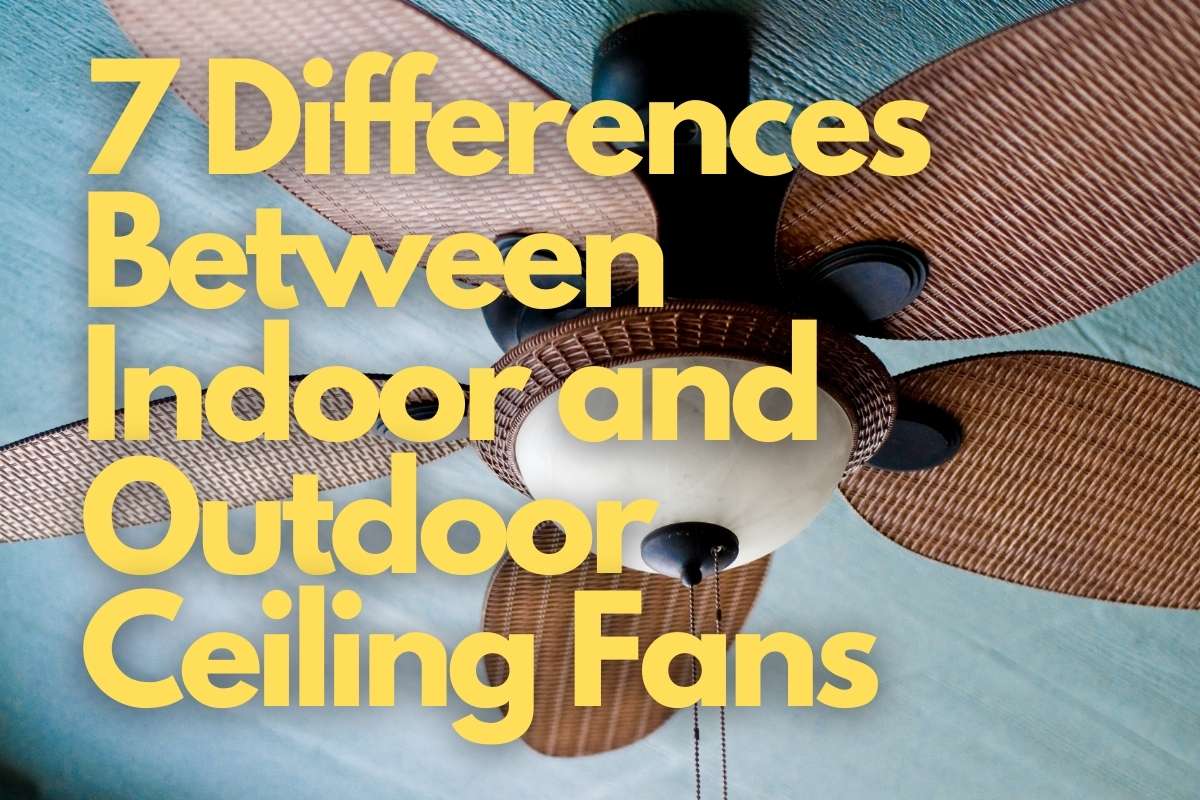 Indoor and outdoor fans serve the same function, which is to circulate the air and freshen the atmosphere in an area as well as to cool the occupants. Such functions must be performed in different environments, however, due to the differences between the two fan types.

Here are 7 critical differences between indoor and outdoor ceiling fans:

A ceiling fan can be a great addition to an indoor room or an outdoor sitting area. Understanding the differences between indoor and outdoor fans will help you make the best, well-informed decision on the right fan for your home or business. Read about their differences below.

1. Outdoor Ceiling Fans Are Designed To Withstand the Elements

What makes outdoor ceiling fans different from indoor ceiling fans is that they’re designed to withstand the elements. The water and wind resistance of outdoor fans may vary based on the producer’s quality of materials and intent.

Outdoor fans must be suspended from a ceiling, but this doesn’t mean they’re out of risk. Wind can blow rain into protected areas, and other factors such as plumbing or leaks in the roof may expose the ceiling fan to water, even if protected by an awning or patio cover.

For that reason, outdoor ceiling fans are specifically designed to survive harsh climate conditions. They’re made using materials less prone to rust and feature insulation to protect the electrical components.

Suggested: Can outdoor ceiling fans be exposed to rain?

As a rule, ceiling fans aren’t voracious power consumers. Compared to other climate control methods, such as central heating and air systems, fans use a fraction of the electricity. This makes them an economically and environmentally friendlier alternative to AC.

Suggested: How much CFM does a ceiling fan need for my space

To mitigate the risks, manufacturers use materials with more elemental resistance; usually, it means using metal for the blades and insulating the electricity box in the mount to avoid water exposure.

As mentioned earlier, there are two types of outdoor ceiling fans. When getting an outdoor fan, you want to ask yourself whether you need a wet-rated or damp-rated one. Your choice will heavily depend on what you need the outdoor ceiling fan for. As for outdoor fans, they’re all dry-rated because they’re not designed to withstand the elements or get wet.

Below, I’ll explain the differences between the ratings and what they’re good for.

Wet-Rated Fans Can Be Used in Harsh Weather

Wet-rated ceiling fans simply mean that they’re capable of surviving severe water exposure. Waterproof fans are important if the fan is mounted in a place where it’s regularly exposed to the elements, as rust and electrical shorts can ruin the fan and be dangerous to residents.

Depending on the fan’s brand and quality, you can expect to pay roughly between $300 and $2,000 for a wet-rated outdoor ceiling fan.

What’s great about wet-rated fans is that you can easily clean them with a garden hose or spray bottle of water. The added simplicity of maintenance makes them a popular option for outdoor ceiling fans.

Damp-Rated Fans Can Only Tolerate Drizzle

A damp rating means the ceiling fan is water-resistant, not waterproof. Damp-rated ceiling fans can be suitable for outdoor seating scenarios, provided there’s an adequate assurance against water exposure.

The fan will survive a little rain but not a direct jet from a garden hose. If you live in a dry climate and the ceiling fan is well protected by the seating area’s covering, damp-rated ceiling fans should be fine. However, many people still choose to err on the side of safety by installing a wet-rated fan rather than a damp-rated one.

Suggested: Do I need an outdoor rated fan for a covered patio?

Dry-Rated Fans Are Only Meant for Indoor Use

You might think you can use an indoor ceiling fan for your outdoor space, but you only risk damaging your fan by doing so. That’s because indoor fans aren’t meant for outdoor use. They don’t do well in high moisture conditions and will spoil if exposed to drizzle or downpours.

Suggested: Can an indoor fan be used outside?

5. Blade Designs Are Different in Outdoor and Indoor Fans

Even though they serve essentially the same function, indoor and outdoor fans utilize different design elements to accomplish their task.

Due to the regulations around RPM relative to blade size and because it must effectively move a larger volume of air at a consistent pace, outdoor ceiling fans must rely on their blade design as well as the motor.

For this reason, outdoor ceiling fans’ blades are often shaped and positioned differently than those of indoor fans.

Outdoor fans are tasked with moving a much larger amount of air than indoor fans. In order to accomplish this in the most energy-efficient way possible, many outdoor fans feature broad blades made to push the maximum amount of air with every rotation.

Suggested: Can you put longer blades on a ceiling fan?

The outdoors provides a larger area, allowing for larger fan blades. This is one of the most crucial elements to an effective outdoor fan, as larger blades naturally push more air. However, larger blades are also heavier and require more energy to rotate, making them less energy efficient.

The angle or pitch at which the blade is set is another telling feature between indoor and outdoor fans. Outdoor fans tend to have their blades set at a more dramatic pitch, causing a more violent air stirring. This is effective for pushing large amounts of air around, as is needed in an outside setting.

However, indoor fan blades are usually set at a more mild pitch, as they must move air through a room without creating a wind tunnel.

There are federal regulations dictating the maximum limit of RPMs permissible for a ceiling fan. This is a safety regulation to avoid blades reaching truly dangerous speeds in case of an accident.

The RPM limit of a fan is based on the blade’s thickness. A thinner blade at high speed actually does more damage than a thicker, heavier one. Therefore, more powerful motors must be accompanied by thick, blunted blades.

Because outdoor fans require stronger motors, the blades must be thicker than those used on weaker indoor fan motors.

Because indoor fans are frequently dry-rated, they’re neither waterproof nor water-resistant, and they’re less easy to clean than wet-rated fans. Indoor dry-rated fans also tend to accumulate dust on top of the fans, which can cause allergy symptoms. You must clean the blades regularly with a damp rag or sponge.

Outdoor fans can accumulate dust and dirt as well and can get even dirtier than indoor fans. However, they are often washed off by some rain and cleaning them is much easier. You’re also unlikely to get any allergy symptoms with outdoor fans because the space is open.

Can I Use an Indoor Ceiling Fan Outside?

You shouldn’t use an indoor ceiling fan outside because it’s dry-rated, meaning it’s not designed for an outdoor setting. Rain and moisture can easily damage it. Also, indoor fans are typically smaller and less powerful than outdoor ones, hence ineffective for circulating air in outdoor spaces.

Suggested: Can an indoor fan be used outside?

All ceiling fans should be at 24 inches (61 cm) between the tip of the blade and the neared wall and should be no less than 84 inches (213.4 cm) above the floor. If a room can’t accommodate these requirements, it’s not safe to install a ceiling fan.

These regulations and guidelines apply to both indoor and outdoor ceiling fans. While outdoor fans tend to have more space laterally or distance between them and the nearest wall, some are mounted on lower hanging ceilings than indoor fans. This may call for a hugger fan, allowing more vertical space and reducing the risk of taller individuals being decapitated by the turning blades.

Suggested: Can I mount a ceiling fan on a 7′ high ceiling?

How To Install an Outdoor Ceiling Fan

Ceiling fans can be a great addition to a covered seating area. On summer evenings, having a cool breeze one command is a great advantage. In making sure you can enjoy the cooling effect of an outdoor fan safely, follow the steps and precautions below when installing an outdoor ceiling fan.

If you’re not comfortable or experienced doing your own electrical work, it’s highly recommended that you hire a professional to handle it. Ceiling fans, simply because they’re hung from the ceiling and require more effort to install, aren’t the place to cut your teeth as an amateur electrician.

Before doing any electrical work, make sure you have cut the power to the area you’re working on.

If you’re installing a fan on a pre-existing ceiling, rather than adding a fan to a room you’re building, use a specifically marked “old work” bracket. Using the right kind of bracket can help prolong the fan’s life, the ceiling, and whoever is sitting underneath them. Fix the bracket to the ceiling. Be sure that a strong beam supports the box and bracket.

Suggested: How to find out if a lighting box can handle a ceiling fan?

Once the bracket is securely fixed in place, you can finally attach the fan. It’s easier to attach the fan’s body separately and then fix the blades once the body is in position. A fan with blades attached, especially the large, metal outdoor fans, can be heavy and unwieldy, making them difficult to install fully assembled.

4. Test the Fan Before Calling It a Day

Before you put away your ladder and tools:

Modern ceiling fans aren’t too difficult, so most laymen users should be able to install the unit themselves. Most customers, in fact, report that outdoor ceiling fans take less than an hour to install, on average. Once the fan’s up there and you’re confident that it’s safe and stabilized, you can enjoy a cool breeze when desired.